Iraq is falling apart for reasons that have nothing to do with President Obama or his policies. 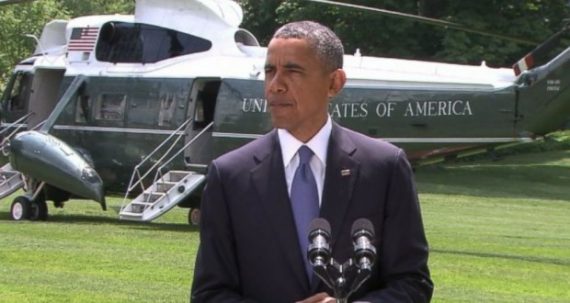 With the past week of reports out of Iraq from the fall of Mosul to the forces of ISIL/ISIS, to that same group’s capture of Tikrit and advance on Baghdad in the fact of an Iraqi Army that, at least so far, seems completely unwilling to fight, there has inevitably been a lot of discussion here in the United States about whose responsible for what’s happening in Iraq nearly three years after the last American troops withdrew. Not surprisingly, Republicans have tried to lay the principle blame for the deterioration of Iraq on President Obama, with Senator John McCain being perhaps the loudest voice making that argument so far;

“Everybody in his national security team, including the chairman of the Joint Chiefs of Staff, ought to be replaced,” the Arizona Republican told reporters ahead of a classified Senate Armed Services Committee briefing on the deteriorating situation in Iraq. “It’s a colossal failure of American security policy.”

The Sunni militant group, Islamic State of Iraq and the Levant, vowed Thursday to march into Baghdad after overrunning Iraq’s government forces in Tikrit and Mosul.

The offensive is sparking a wave of Republican criticism over Obama’s decision to withdraw all U.S. troops from Iraq at the end of 2011 — and concerns that the U.S. gains in the Iraq war were about to completely evaporate.

Less than three years after the end of the U.S. war in Iraq, the Obama administration and members of Congress are now mulling whether the U.S. has to re-engage militarily in order to save the gains made during the eight-year war that saw more than 4,000 U.S. troops killed.

“There is no scenario where we can stop the bleeding in Iraq without American air power,” said Sen. Lindsey Graham (R-S.C.). “It is my worst fear come true. If the president is willing to adjust his policies, I’m willing to help him.”

For McCain and other GOP defense hawks, the latest developments were a condemnation of the decision to withdraw all U.S. troops from Iraq at the end of 2011.

“We’ve got another Benghazi in the making here,” Graham said after leaving the classified briefing. “What I heard in there scared the hell out of me.”

After attending the briefing, both McCain and Graham took to the Senate floor to blast Obama over the latest developments in Iraq. McCain said those who were right in Iraq — like retired Gen. David Petraeus, the former CIA director who as a general carried out the “surge” — should be directing U.S. policy there.

“Lindsey Graham and John McCain were right,” McCain said. “Our failure to leave forces on Iraq is why Sen. Graham and I predicted this would happen.”

The U.S. should consider providing air power in Iraq, as the Iraqi government has reportedly requested, McCain said, but ruled out putting U.S. troops on the ground there.

“No, I don’t think we should send troops back there,” he said. “We should explore all the options in air power, get a team over there to advise them. It’s so serious I’m not sure exactly how it can be done. Al Qaeda is now the richest terrorist organization in history.”

But McCain said that he believed “airstrikes alone will not be enough.”

Implicit in the Republican criticism of the President on Iraq today is the contention that he and his Administration failed to take the steps necessary to ensure that there would be some kind of remnant of American force left behind in Iraq after the end of 2011. Leaving aside the point that, at most, the remnant for being talked about would have numbered only a few thousand troops whose primary task would have been training the Iraqis, this contention is quite simply an inaccurate representation of what actually happened leading up to the final withdrawal of American troops in December 2011.

Under the Status Of Forces Agreement that President Bush had negotiated with the Iraqi government before leaving office, all American troops were supposed to be out of the country by December 31, 2011, with the United States gradually handing over security responsibilities to the Iraqis in the ensuing years. As that deadline approached, there were discussions between the U.S. and the government of Iraqi Prime Minister Nouri al-Maliiki about keeping some kind of small force behind after the end of 2011, with some reports putting the size of that force at no more than about 4,000 soldiers. The two nations attempted to negotiate a new Status of Forces Agreement that would have governed the relationship between that force and the Iraqis and, importantly, would have provided that, in most cases, American forces accused of crimes in Iraq would be processed through the military court system rather than Iraqi civilian courts. This is a standard part of Status of Forces Agreements with other nations and, importantly, had been part of the agreement that the Bush Administration had negotiated with Iraq years earlier. Admiral Mike Mullen, who was Chairman of the Joint Chiefs at the time, stated that such a provision was an absolute necessary. Prime Minister al-Maliki, however, was unable to secure agreement to a new SOFA from his government, apparently in large part due to these provisions of the proposed agreement. Without a Status of Forces Agreement, we had no legal right to keep troops in the country and, in the end, there was no agreement because the Iraqis didn’t want one. Blaming President Obama for this little more than after the fact partisan nonsense that bears no connection to reality.

The other flaw in the conservative critique that has been circulating for the past several days is the idea that the war in Iraq was “won” and that events of the past week, which actually have their roots in violence that has been ongoing for the past year, effectively amount to snatching defeat from the jaws of victory. In some sense, I suppose you could say that we “won” the Iraq War in that Saddam Hussein was deposed and, by the time we left, the insurgency that had risen up in his wake had been largely silenced. There also seemed to be some degree of political stability in what amounted to Iraq’s first democratically elected government.  Underneath that stability, though, there clearly lied the same ethnic and religious tensions that came to the forefront after the downfall of Saddam Hussein’s regime. So, in some sense, then the “peace” that prevailed in Iraq when we left may have been nothing but a temporary respite. Additionally, even if one agrees that there was some kind of military “victory” achieved in Iraq by the end of 2011, the future of Iraq depended on factors that were far beyond the control of the United States, and which certainly could not have been controlled by the residual force that some were calling for at the end of the U.S. deployment.

If it wasn’t President Obama, then who is the person who could be said to have “lost” Iraq? Fareed Zakaria makes a powerful argument that the person primarily responsible for what has happened in Iraq over the past four years or more is none other than Prime Minister Nouri al-Maliki:

Whenever the United States has asked this question — as it did with China in the 1950s or Vietnam in the 1970s — the most important point to remember is: The local rulers did. The Chinese nationalists and the South Vietnamese government were corrupt, inefficient and weak, unable to be inclusive and unwilling to fight with the dedication of their opponents. The same story is true of Iraq, only much more so. The first answer to the question is: Prime Minister Nouri al-Maliki lost Iraq.

The prime minister and his ruling party have behaved like thugs, excluding the Sunnis from power, using the army, police forces and militias to terrorize their opponents. The insurgency the Maliki government faces today was utterly predictable because, in fact, it happened before. From 2003 onward, Iraq faced a Sunni insurgency that was finally tamped down by Gen. David Petraeus, who said explicitly at the time that the core element of his strategy was political, bringing Sunni tribes and militias into the fold. The surge’s success, he often noted, bought time for a real power-sharing deal in Iraq that would bring the Sunnis into the structure of the government.

A senior official closely involved with Iraq in the Bush administration told me, “Not only did Maliki not try to do broad power-sharing, he reneged on all the deals that had been made, stopped paying the Sunni tribes and militias, and started persecuting key Sunni officials.” Among those targeted were the vice president of Iraq and its finance minister.

Zakaria’s assessment is one that pretty much every commentator on the Middle East has had to say about the matter, with the exception of course of those such as Senator McCain who have blindly obvious partisan reasons for trying to place the blame on President Obama.

Understanding why Iraq is in its current situation is important, because it helps us to understand the limitations of what we might actually be able to do in what seems by all accounts to be a rapidly deteriorating situation. Military analysts have suggested that airstrikes by the United States could have an impact on the immediate military situation in Iraq, most notably by potentially slowing the advance of ISIS/ISIL forces and giving the Iraqi military time to regroup and rally forces. However, as The Washington Post’s Mark Lynch notes, American military intervention would have a very limited impact if it weren’t accompanied by real political change by the al-Maliki regime. President Obama himself acknowledged this in his statement on the Iraq situation on Friday when he said that the United States would not involve itself in a military conflict in Iraq without some evidence of political change by the Baghdad Government. So far, that doesn’t seem like it’s going to happen and, unless it does, the United States should be incredibly cautious about getting involved in Iraq yet again.