Obama Killed The War Powers Act? No, Congress Did

Once again, Congressional abdication has led to an Executive Branch power grab. 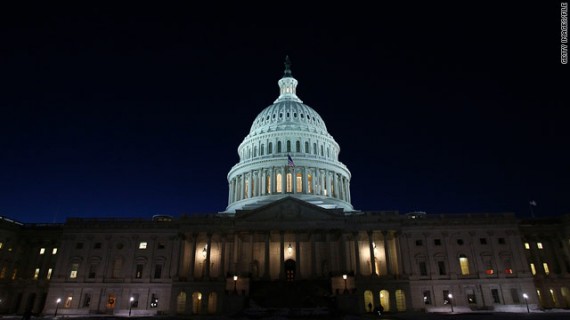 This week, the War Powers Act confronts its moment of truth. Friday will mark the 60th day since President Obama told Congress of his Libyan campaign. According to the act, that declaration started a 60-day clock: If Obama fails to obtain congressional support for his decision within this time limit, he has only one option — end American involvement within the following 30 days.

Obama has not only failed but he hasn’t even tried — leaving it to Sen. Richard Lugar, the ranking Republican on the Foreign Relations Committee, to call for a “specific resolution that would give [the president] authority.” Neither the president nor the Democratic congressional leadership has shown any interest. They have been sleep-walking their way to Day 60.

Obama’s politics of silence contrast sharply with clear and consistent legal pronouncements of the executive branch. Richard Nixon vetoed the act in 1973, precisely because it imposed restraints on presidential warmaking. But two-thirds of both houses of Congress overrode his veto, and the presidency soon fell into line. Jimmy Carter’s Justice Department expressly affirmed the constitutionality of the 60-day clock in 1980 — and its verdict has not been challenged by executive-branch lawyers.

If nothing happens, history will say that the War Powers Act was condemned to a quiet death by a president who had solemnly pledged, on the campaign trail, to put an end to indiscriminate warmaking.

Ackerman and Hathway make the same mistake  that many people wh analyze this issue do in that they view the Presidency’s power grab int he area of war powers as a completely one sided matter. They forget that there is more than one branch of the Federal Government. As I noted when the debate over the Libyan engagement began (which was roughly an hour after the President announced it), Congress has nobody to blame but itself for the fact that Presidents have essentially written them out of the war powers process over the past 60 years:

What the Constitution says about war powers at this point is largely irrelevant, what matters is nearly 200 years of tradition and history, during which Presidential authority to engage in military action without getting direct Congressional approval has gradually, but incessantly, expanded. It started in 1801 when Thomas Jefferson essentially declared war on the Barbary States (located, ironically enough, in what we now call Libya) for their piracy against American military and merchant vessels. In that instance, Jefferson did inform Congress of his actions, and they did issue what some might call an authorization for the use of force against the pirates. Later, in the 20th Century, Presidents sent forces of various sizes of Latin American nations such as Nicaragua to put down rebellions or maintain control. Then, once the Cold War started, the instances of unilateral action by the President increased exponentially, starting with the Korean War, a three-year long engagement that was never directly authorized by the United States Congress. And, of course, its worth noting that the bloodiest conflict in American history was an undeclared war.

There are plenty of reasons to be concerned about the fact that we’ve strayed so far from the intended separation of powers when it comes to the power to make war. However, we are not just talking about a situation where President’s have grabbed power. This has been a willful abdication by a Congress that doesn’t want to get its hands dirty in the foreign policy arena, and doesn’t want to take responsibility for the decisions that they should be making in that area.

With but a few notable exceptions, two of which happen to share the last name Paul, no Senator or Congressman of either party has stood up and said anything over the past two months about the President’s decision to commit American military forces to action in a nation that did not attack us and poses no threat to us or our interests, in a conflict where we still aren’t even sure if the “rebels” are any better than the government they’re trying to overthrow. Nobody in Capitol Hill with the power to do so has help hearings on the engagement, or suggested that the matter be put to a vote in the House and the Senate.

They have, in other words, proven that Matthew Yglesias to have been absolutely correct when he wrote this:

For congress, it’s quite convenient to be able to duck these issues. Handling Libya this way means that those members of congress who want to go on cable and complain about the president’s conduct are free to do so, but those who don’t want to talk about Libya can say nothing or stay vague. Nobody’s forced to take a vote that may look bad in retrospect, and nobody in congress needs to take responsibility for the success or failure of the mission. If things work out well in Libya, John McCain will say he presciently urged the White House to act. If things work out poorly in Libya, McCain will say he consistently criticized the White House’s fecklessness. Nobody needs to face a binary “I endorse what Obama’s doing / I oppose what Obama’s doing” choice.

And, while I don’t claim any gift for prescience, I think I got it pretty much right here:

As for what will happen with regard to Libya, I think that’s pretty easy to figure out. Congress will do nothing. With American forces committed abroad, and the increasing possibility that ground troops may be necessary at some point, no Congress is going to step in and tel the President he can’t do this, no matter how much they believe that to be the case.

The problem is what this means for the future. Once again, Congress has abdicated in the face of a Presidential power grab and that means that, in the future, this President and his successors will feel much more free to act without considering either the desires, or the existence, of Congress. One day, maybe Congress will wake up and realize what’s happened, and when they do they will only need to look in the mirror to find the party responsible for this disaster.