President Obama had some prominent liberal journalists over for coffee. 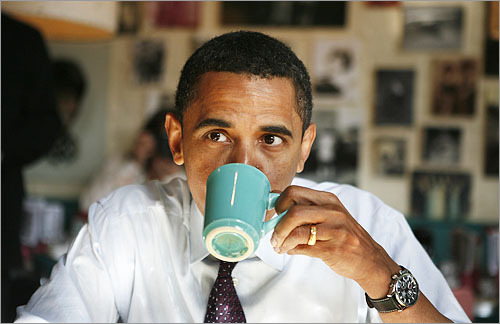 President Obama had some prominent liberal journalists over for coffee Fridaymonths ago, ABC’s Jake Tapper reports (“POTUS has Coffee with Progressive Media Stars“).

An all-star list of progressive and liberal media folks came to the White House today to chat with President Obama over coffee in the Roosevelt Room.

The group chatted with the president about economic messaging, his agenda for 2012, the various campaign arguments against different GOP candidates, the desire among some Democrats for him to highlight his foreign policy accomplishments, fighting corporate influence and the “crappiness” of the Senate filibuster , as one attendee put it.

Keith Boyea, who’s by no means a Republican shill, believes this is “over the top” and argues “it is inappropriate for so called ‘reporters’ and ‘journalists’ to have friendly little chats with politicians.”

Now, while I’ve never been invited to the White House, I went to an off-the-record session with Governor Romney a few months back and participated in quite a few blogger calls with Senator McCain last cycle. (I’ve also done a handful of such calls with Obama administration officials, too, but they were foreign policy oriented and the intent was somewhat different.)  So, perhaps I’m a bit biased here. Still, this sort of thing strikes me as perfectly reasonable.

While I’m not a fan of everyone on the invite list, several of them are solid journalists. I’m a big enough fan of Josh Marshall’s work to be a paying subscriber to his new TPMPrime venture and generally like Ezra Klein, Chris Hayes, and even Rachel Maddow. They’ll all call out Democrats, including President Obama, when they do something they find objectionable. At the same time, none of them pretend that they’re Objective Journalists; they’re all liberals of various stripes and openly wear a Team Blue jersey.

Because they’re all quite influential and sympathetic to the cause, it’s perfectly natural for the White House to reach out to them in the closing weeks of a tight re-election race. And they have an authentic journalistic interest in going to hear what the president and his team have to say about the issues that concern them.

Despite Marshall’s site being called “Talking Points Memo,” I can’t imagine that he’s going to tailor his coverage and commentary to the talking points the White House puts out. But Obama’s team might be able to persuade Marshall that something that appears from the outside to be monumentally stupid or outrageous actually makes sense given the team’s strategy. Or they might not. But it wouldn’t make much sense for someone running a major political site to turn down a chance to ask questions of the president. Hell, I’d have gone had I been invited.

Beyond the specific meeting, reporters frequently meet with the president in small groups. Obviously, the expectations are a little different, since straight reporters are seen as somewhat adversarial. (Whatever one’s views of “liberal media bias” charges, it’s just undeniable that scoops and buzz trump water carrying.) But there’s little doubt that part of the objective of giving personal touch access is to curry favor and build rapport.

UPDATE: So, it turns out that this is an old, old story. Someone tweeted it and spawned a discussion on it and I just saw the “19” and thought it was a story from Friday. The analysis is still relevant, though, so I’ll leave the story up.