Obama Not Recognized at DC Gym

Barack Obama has apparently been on the campaign trail so long that they don’t recognize him in Washington anymore.

Sen. Barack Obama (D-Ill.) may have one of the best-known faces in the world, but that doesn’t mean he is recognized everywhere, even in Washington.

Washington Sports Club employee Takehia Wheeler was manning the front desk to scan members’ identification cards Friday morning when the presidential candidate walked in with his entourage. The gym opened a month ago in the Columbia Heights district. “He came in and walked past me,” Wheeler told In The Know. “I was like, ‘Sir, you need to come back.’ ” Wheeler said Obama looked familiar, but she didn’t recognize him. So she asked for his ID card. “I said, ‘What’s your last name?’ He said ‘Obama,’ ” Wheeler explained. “I said, ‘So what’s your first name?” Then she laughed because it was at that point that Wheeler realized who she was talking to. How did she make amends? By saying, “Sorry, Mr. Future President!”

She wasn’t alone in not recognizing Obama. Trainer Drew McNeil wasn’t sure either. “I was training right next to him, and I was like, ‘That looks like Obama,’” he said.

Obama brought his security detail along. Gym staff said Obama stayed for 20 minutes. They said he has a membership to the citywide gym network, with his home gym at the Gallery Place/Chinatown location.

Well, at least they recognized the name and know that there’s an presidential campaign going on. I suspect that a goodly portion of the country are less clued in than Wheeler and McNeil. Despite the fact that political junkies like myself have been following this race closely for more than two years already (there are 1,237 entries, including this one, in OTB’s Campaign 2008 category), most people are only peripherally aware of it, if that, at this stage of the game. Which, incidentally, is probably just as well. 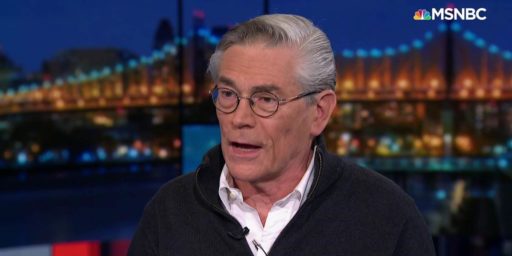