The Obama campaign's cheap politicizing of the SEAL raid that took out bin Laden is unseemly. And unnecessary. 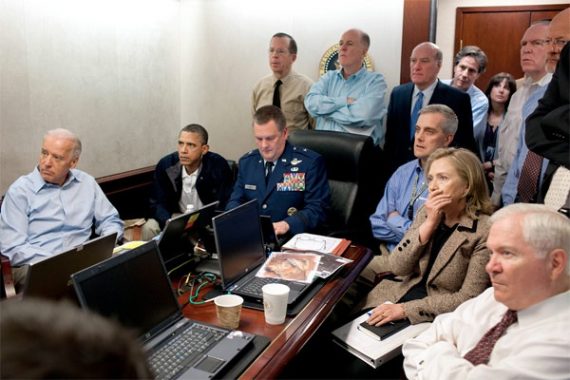 Explaining his decision not to release the photos of dead terrorist Osama bin Liden, President Obama famously declared “we don’t need to spike the football.” He rightly pointed out “We don’t trot out this stuff as trophies” and noted that doing so might “create a national security risk.” In a further show of class, he made sure to credit efforts under his predecessor–who himself reciprocated the graciousness by declining to bask in the spotlight at Ground Zero–and to give the lion’s share of the credit to the career professionals in the intelligence and special operations community.

It was all exceedingly well played. It was statesmanlike and in keeping with his well-deserved reputation as a cool customer. As a bonus, the public would naturally give credit to the guy in the command chair when Public Enemy #1 got what he deserved, anyway.

To be sure, Obama has subsequently used variations of “we got bin Laden” as an applause line in speeches. And people who work for him, notably Vice President Biden, have been a little less humble about the manner, making a big deal about what a “gutsy call” it was to give the GO order and declaring, “If he was wrong, his Presidency was done. Over.” That’s, at best, an exaggeration. But one well within the rules of the political game.

Yesterday, though, things got silly. The Obama campaign rolled out a new ad, narrated by former President Bill Clinton, suggesting that Mitt Romney would not have made the same decision.

The entire evidence for this claim is that Romney declared in 2007 that he would not conduct drone strikes inside Pakistan without their permission–a position taken, incidentally, by Hillary Clinton at the time–and that he had stated that he would not “move heaven and earth” to go after one man. But, contrary to the assertions by Biden and Bill Clinton, giving the GO order wasn’t that hard a call. It’s not like Abbotobad is heavily defended airspace; we fly inside Pakistan with impunity and have for years. And we routinely get American servicemen killed in this war and have been doing so for more than a decade. So, the political upside was enormous while the political downside was small.

Where Obama does deserve substantial credit here is for his decision to revive the Bin Laden Unit and make getting the al Qaeda frontman a higher priority. President Bush had decided some years back that it was a distraction from the larger War on Terror and Romney’s 2007 statements would seem to indicate that he agreed with that decision. Not having the inside intel on the decision-making process–or more than a vague sense of the trade-offs involved–I really don’t have strong feelings about it one way or the other. Even with the advantage of hindsight, it’s not obvious. Getting OBL was a fantastic feel-good moment and a big symbolic victory; its overall impact on Islamist terrorism in general and even al Qaeda in particular was minimal.

Further, even if the GO order is less intrepid than advertised, Clinton’s statement in the ad is otherwise right: We hire presidents to make tough decisions and this president made it.

Ben Shapiro is getting kudos for poo-pooing Obama’s leadership here by pointing out that Admiral McRaven, the JSOC commander, was given complete autonomy on “timing, operational decision making and control.” Well, of course he was. Even Lyndon Johnson, who infamously involved himself in targeting decisions for bombing raids over Vietnam, delegated tactical decisions to the military. Oddly, Shapiro simultaneously criticizes the president for covering his backside with a caveat that, if the SEALs encountered unanticipated risks, the mission was “to be brought back to the President for his consideration.” So, which is it? Either Obama gets no credit because he delegated all the tough calls to McRaven or he gets credit for staying engaged.

Senator John McCain has frequently been less than gracious–occasionally rising to the level of being a crank–in assessing his 2008 opponent’s foreign policy. But he gets it right here.

Shame on Barack Obama for diminishing the memory of September 11th and the killing of Osama bin Laden by turning it into a cheap political attack ad. This is the same President who once criticized Hillary Clinton for invoking bin Laden ‘to score political points.’

This is the same President who said, after bin Laden was dead, that we shouldn’t ‘spike the ball’ after the touchdown. And now Barack Obama is not only trying to score political points by invoking Osama bin Laden, he is doing a shameless end-zone dance to help himself get reelected.

No one disputes that the President deserves credit for ordering the raid, but to politicize it in this way is the height of hypocrisy.

And, again, unnecessary. There are arguments to be made about Obama’s foreign policy decisions–McCain makes a slew of them in the remainder of the statement, some of which I agree with, most of which I don’t–but the polls show that the public is quite satisfied with them taken as a whole. To the extent the election is decided on foreign policy, it redounds to this incumbent’s benefit.