Andrew Exum has “a policy whereby when someone is criticized by name, they have the right to post a response.”  Having yesterday taken exception to a WSJ editorial by AEI’s Thomas Donnelly and Gary Schmitt arguing that Obama and Gates are “gutting the military” and received a lengthy email response from Donnelly, he reprints it today.

Not only is Exum’s “right to respond” policy very interesting, following the three links and reading the content at each will serve as an excellent primer on the defense spending and defense acquisitions debates.

As for myself, I’m more sympathetic to Exum’s position than the AEI position.  Barack Obama is most certainly not gutting the military.  Indeed, as noted previously, I think Gates’ proposed cuts are too small.  Further, as Bernard Finel points out, “the intellectual foundation of the new defense budget is the 2008 National Defense Strategy, drafted by Bush appointees and approved by the Bush White House.” We’d likely have seen similar priorities, then, in a third Bush term (were it Constitutionally permissible and electorally conceivable) or a first McCain term

I do, however, share Dave Schuler’s concern that we need to maintain a capacity to produce such wonders as the F22 in larger numbers if needed.  I predict that, once Congress gets involved, this will in fact happen.

As to the side issue of whether the combination of a martini and a steak makes for a good meal, it undoubtedly does.  However, I prefer to have the martini (or perhaps two) ahead of the meal and then switch to wine to better enjoy the complexity of the flavors. 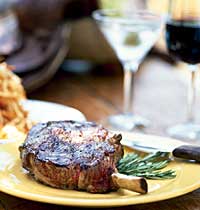