Challengers to the Pennsylvania Supreme Court's ruling on Congressional redistricting suffered two big setbacks in court yesterday that suggest that they've reached the end of the road legally. 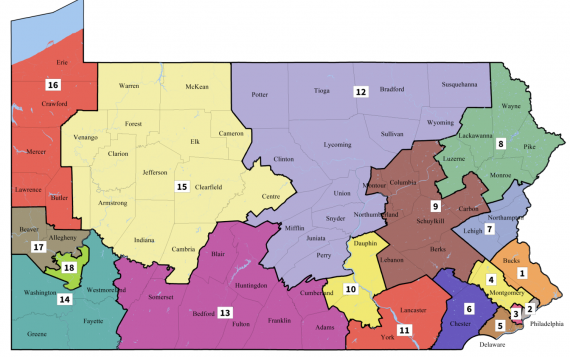 Yesterday, though, the opponents of the state Supreme Court’s ruling suffered a series of setbacks in Federal Court that likely means an end to the challenges:

Just one day before congressional candidates had to file nominating petitions, the U.S. Supreme Court in Washington and the federal District Court here both declined on Monday  to grant requests from Republicans to block the new Pennsylvania congressional district map from going into effect for the May 15 primary.

By improving Democrats’ chances of picking up seats in an important swing state, the new map has already changed the landscape for the congressional elections, with more people expressing an interest in running and some veteran politicians reconsidering their chances of success.

The courts’ decisions on Monday disappointed Republicans —some of whom will likely face a tougher path to re-election — and delighted Democrats, who are hoping to regain control of the House.

“For anyone who cares about democracy, for anyone who cares that every voter’s voice should be heard, this is a great day,” said Mimi McKenzie, legal director of the Philadelphia-based Public Interest Law Center, which represented the Democratic voters who brought the initial suit that prompted the redrawing of the congressional map.

Top Republicans in the state House and Senate seemed resigned Monday to the idea that it was the end of the road for their effort to stop the map.

“I’m sure we’ll review options, but I think we’re accepting the decision,” said Senate Majority Leader Jake Corman (R., Centre), who along with others brought the U.S. District Court challenge. “[We] don’t like it, but that’s life and we move on.”

In a one-sentence filing, the Supreme Court declined late Monday afternoon to intervene in the case. The justices did not offer an explanation for their unanimous decision.

Resignation or glee — depending on political affiliation — then appeared to set in at the Capitol.

State House Speaker Mike Turzai (R., Allegheny), one of two legislative leaders who appealed to the Supreme Court, said in a statementthat he still believes the Pennsylvania Supreme Court overstepped its bounds when it imposed the new map last month.

“Nonetheless, we respect the decision of the U.S. Supreme Court and are prepared to move on to other issues of importance to the people of Pennsylvania,” he said.

Earlier in the day, the U.S. District Court rejected the challenge filed by eight congressmen and two state senators, who argued that the state Supreme Court, when it imposed a new map last month, violated the Elections Clause of the U.S. Constitution, which grants state legislatures the power to oversee elections.

In a 27-page set of filings, the judges said that the Republican lawmakers did not have standing: The argument that the Pennsylvania Supreme Court stepped on the legislature’s rights should be brought by the entire General Assembly, not by two of its members or a group of congressmen, the court said.

The judges wrote that the court was not in a position “to opine on the appropriate balance of power between the commonwealth’s legislature and judiciary in redistricting matters, and then to pass judgment on the propriety of the Pennsylvania Supreme Court’s actions under the U.S. Constitution.”

The judges said that the issues raised in the case were “of high importance to our republican form of government” and that they understood the GOP’s frustration. “But frustration, even frustration emanating from arduous time constraints placed on the legislative process, does not accord the plaintiffs a right to relief,” they wrote.

The three judges — Chief U.S. District Judge Christopher C. Conner for the Middle District of Pennsylvania, Judge Kent A. Jordan of the U.S. Court of Appeals for the Third Circuit, and District Judge Jerome B. Simandle for the District of New Jersey — all were appointed by Republican presidents and confirmed with bipartisan Senate support.

As is typically the case, the Supreme Court’s decision to not stay the state Supreme Court’s did not come with a written opinion of any kind explaining the Court’s ruling, but simply via a one-sentence ruling stating that the request for a stay had been denied. Effectively, though, this means that the state Supreme Court’s ruling will remain in effect and that its map will be the one that the race for Congress in the Keystone State will be based on this year. Theoretically, it’s still possible that the losing side in the underlying state Supreme Court ruling could seek to have their case reviewed by the nation’s highest court, but it seems unlikely at this point that the Justices will be inclined to accept the case. The main reason for that, of course, is that the underlying decision was based on state law and the state Constitution. In such situations, the Supreme Court is generally reluctant to question the ruling of a state’s highest court unless Federal law or the Federal Constitution is implicated in some way. While the legislators challenging the ruling do apparently raise some federal claims on appeal, it seems apparent that the Justices don’t find that argument persuasive. Additionally, the fact that the Court has rejected two requests to stay the underlying ruling, including this most recent one that comes just days before the filing deadline for the upcoming May primaries, suggests strongly that it would reject an appeal of that ruling.

The second ruling from a three-judge panel of Federal Judges in Harrisburg also seems unlikely to be going anywhere. In that case, the challengers did raise Federal law claims against the underlying state Supreme Court ruling as well as claims based on state law. In their ruling, the three-judge panel appointed to hear the case ruled that the challengers before them did not even have standing to challenge the underlying ruling and therefore did not reach the merits of the decision itself. The Plaintiff’s could seek to appeal this ruling directly to the Supreme Court, which is the proper procedure cases involving three-judge panel District Court rulings, but that avenue is as likely to be unsuccessful as the efforts to get the Justices to review the ruling of the Pennsylvania Supreme Court has been. In theory, this leaves open the possibility that some group of Plaintiffs who do have standing, the three-judge panel suggested that the state’s General Assembly could theoretically have such standings, could challenge the ruling, but that would require a whole new lawsuit and a new round of pleadings. Given the fact that the deadlines for the upcoming primaries are fast approaching, though, I tend to agree with Lyle Denniston that it’s likely that this pair of rulings yesterday marks the end of the legal road for challenges to the state Supreme Court’s ruling.

As a practical matter, this means that the map drawn by the Pennsylvania Supreme Court will be the one that governs the upcoming midterm elections in the state and, unless there is some intervening act, the 2020 Congressional elections in the state as well. This is likely to inure to the benefit of Democrats in a year where the battle for control of the House of Representatives is already at a fever pitch. Presently, the Pennsylvania Congressional delegation consists of 12 Republicans and 5 Democrats. Assuming that Conor Lamb’s narrow victory last week is certified, that will soon become 12 Republicans and 6 Democrats. Political observers in Pennsylvania estimate that the redrawn map could lead to Democrats picking up at least 3 or 4 seats in November even under normal circumstances. In an election year like the one we appear to be headed toward, it could mean even bigger Democratic gains in the Keystone state that would play a big role in adding to the total number of gains Democrats need to regain control of the House after eight years in the minority.

Here’s the opinion of the three-judge panel: