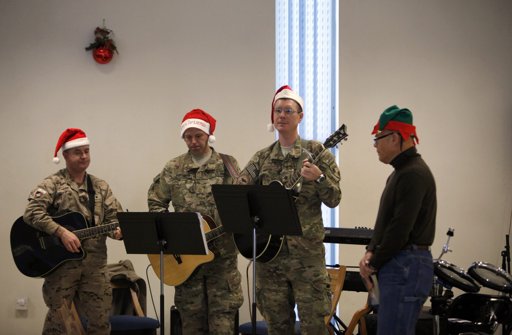 Third: Hal 10000 – I’m Murph and these are the Magic tones. We’ll be back with the Magic Tones for the Armada Room’s two hour Christmas party after this short break (We’re on a mission from God. – rodney)

Donald sensing – Pvt. Schnerdlap’s heart sank as he realized he hadn’t received the memo about the uniform of the day.

Simon H Gedney – The band has just learned that they’ve been thrown over the fiscal cliff.

Robert W. Armijo – During a break in the battle, the Three Amigos take a moment to serenade a small village in Kabul.

al-Ameda – Trust us, we sound better after you’ve smoked a lot of weed.

♬ Oh, We’re gonna have a nuclear winter, for the next 10 thousand years. ♬

The Monday Contest is still seeking him.