The Quark Side Edition OTB Caption ContestTM is now over.

The Quark Side Edition OTB Caption ContestTM is now over. 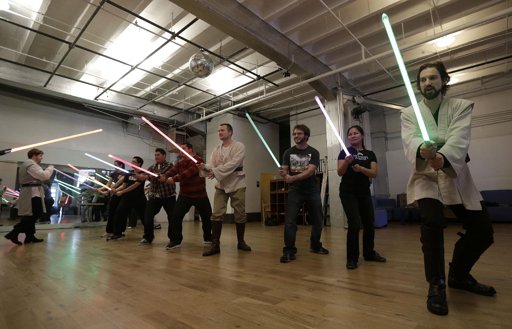 First: Montanareddog – Members of the NLSA prepare to defend their right to keep and bear arms as part of a unregulated pseudo-religion in the face of no attempts at confiscation by non-existent Imperial agents not arriving in black TIE fighters (you can’t be too cautious – rodney)

markm – “Excuse me….can you tell me when we will be mandated to use the stupid curlycue lightsabers that you can’t cut wet paper, don’t give off any light and are a danger the the galactic environment?”

He who must not be named – Telescoping blades? Isn’t that covered by Feinstein’s assault weapons ban?

OzarkHillbilly – The Jedi Training Academy was given a major upgrade when it was moved from the swamps of Dagobah to a boxing gym in Brooklyn.

John Burgess – A new generation of home-bound Jedi await Joe Biden’s instructions on firing their light sabers into the air.

Jeremy – When I heard the Tea Party crowd wanted to slash spending, I never realized they would do it with such style!

Patrick McCain – The Jedi fell one by one as Kirk emptied his phaser, violating the Prime Directive once again.

Biden: “Yup, just stand on the back porch and fire up one of these babies and nobody is gonna mess with ya.”

Obama takes up a different form of skeet shooting.

Congress prepares for the sequestration battle.

Luke, I am your batter (it is spring training camp time after all)

The Thursday Contest in actuality has been here before.