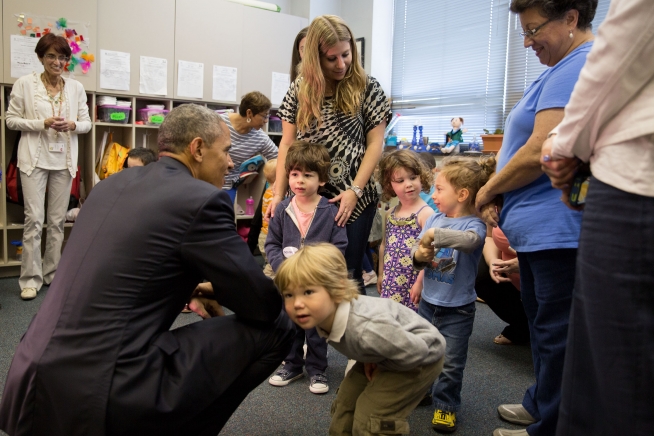 First:David in KC – Suddenly, the room smelled a lot like DC.

Second:OzarkHillbilly – Unable to have an intelligent conversation with members of Congress, Obama turns to a group of Kindergartners.

Third:RockThisTown – The President shown taking tougher questions than Hillary has faced so far.

Franklin – No, I will not read My Pet Goat … bad stuff happens.

edmondo – President Obama plays hardball and punches future Senator Peter McNichols (D-FL) in the stomach when he asks to see a copy of the TPP.

Pinky – “Listen, you little brat, I don’t care if you found Waldo first – I can make one phone call and Waldo’s drone dust.”

jd – Hey, Mr. President. That guy in the black suit who came with you just walked out with my mommy

Paul Hooson – Some of the kids were very disappointed. Oprah at least has prizes hidden under the seats…

“Don’t worry kid… M’chelles lunches do that to me too.”

“So what’s your last name Ben?” “Dover” “I think I already met your sister, Ilene”

“I can’t believe I ate the whole thing”