The Mic Drop Edition OTB Caption ContestTM is now over.

The Mic Drop Edition OTB Caption ContestTM is now over. 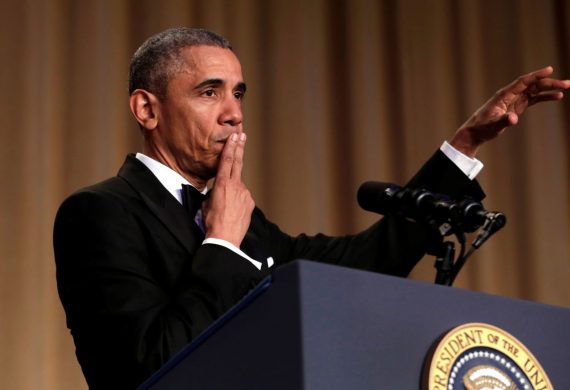 First: Moosebreath – If you are very quiet, you can hear my last f@%k dropping.

Second: DrDaveT – “…And I did inhale. Just like this…”

Jeron – Trump is so going to put Obama on the first plane to Guantanamo as a punishment for having dropped the mic.

Robert W. Armijo – Sadly, just moments after delivering his last address to the annual White House Correspondence Dinner function during his second term – especially after dropping his mic — did President Obama finally realize that he had, though inadvertently, become the racist stereotype that he wasted his entire first term attempting to deny and avoid.

Mu – “And next the second violins”

john430 – “My peace I give you. My peace I leave you.”-Obama in his Black Jesus moment.

“So long, and thanks for all the fish… ”

“Then Raoul held my arm like this and gave me a cigar.”

“Thought you missed George W. Bush? Wait until you see who’s up next.”