As has often been the case, the White House Correspondent's Dinner is arousing some degree of controversy, mostly because of the comedy or lack thereof. 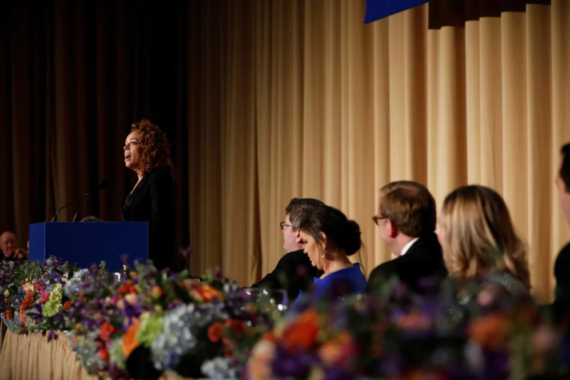 As has often happened in the past, the White House Correspondents Dinner’s comedy entertainer is arousing post-dinner controversy:

Members of the Trump administration walked out of the White House Correspondents’ Dinner Saturday night after comedian Michelle Wolf ripped into White House staffers including press secretary Sarah Huckabee Sanders in the absence of the president himself.

A year after the White House boycotted the annual dinner — and with President Donald Trump holding a competing campaign-style rally in Michigan — director of strategic communications Mercedes Schlapp and her husband, conservative activist Matt Schlapp, were among those who marched out of the ballroom at the Washington Hilton long before Wolf’s keynote routine was over.

Footage broadcast live on cable TV networks showed Sanders sitting at the head table on stage stone-faced, wincing and at times raising her eyebrows as Wolf compared her to a character on the dystopian “Handsmaid’s Tale” and to an “Uncle Tom” for white women.

“I actually really like Sarah. I think she’s very resourceful. But she burns facts and then she uses that ash to create a perfect smokey eye,” Wolf joked about Sanders. “Like maybe she’s born with it, maybe it’s lies. It’s probably lies.”

It was a risque and uneven routine at first met with laughs but often greeted by awkward silence. Wolf laced into the president and repeatedly brought up his comments from the “Access Hollywood” tape. The performance evinced memories of when Stephen Colbert savagely satirized the Bush administration in 2006.

But much of the room went silent with Wolf’s personalized attacks — and an abortion joke that wasn’t well received — and after the Comedy Central comedian joked that she wished a tree would fall on Conway, adding that she did not hope that the White House aide would get hurt, but only “that she would get stuck.”

Former White House press secretary Sean Spicer deemed the evening a “disgrace” in a tweet, to which Wolf replied: “Thanks!”

New York Times reporter Maggie Haberman, who was honored during the dinner for her reporting, said Sanders’ refusal to walk out amid the barbs was “impressive.”

“That @PressSec sat and absorbed intense criticism of her physical appearance, her job performance, and so forth, instead of walking out, on national television, was impressive,” Haberman wrote on Twitter.

While the harshest barbs were reserved for the administration, Wolf also lit into the news media.

“You guys are obsessed with Trump. Did you used to date him? Because you pretend like you hate him, but I think you love him,” Wolf said. “I think what no one in this room wants to admit is that Trump has helped all of you.”

Refusing to attack print media, because “it’s illegal to attack an endangered species,” Wolf poked at Fox News for the network’s ousting of hosts for sexual harassment allegations, CNN for “breaking news” and MSNBC hosts Joe Scarborough and Mika Brzezinski for showing what it’s like “when ‘Me Too’ works out.”

While Trump pilloried the “dishonest” media at his rally in Michigan, White House officials had mingled with the Washington press corps in marked contrast with last year’s event. White House aides said on the red carpet before the dinner they had attended with Trump’s blessing.

Here’s the video of Wolf’s monologue:

The biggest negative reaction regarding Wolf’s routine came in response to several of her jabs at White House Press Secretary Sarah Huckabee Sanders, who was there as a representative of the White House and sitting up at the dais in generally the same place the President would sit if he were attending. The jokes clearly made Sanders uncomfortable and from the crowd’s reaction, they didn’t seem to go over very well with the audience either. Additionally, many people who were watching the debacle and reacting on Twitter reacted negatively to that and several other parts of Wolf’s routine, especially when she ended up dropping an F-bomb that made its way past the censors on the cable news networks and C-Span. When the routine was over, the CNN correspondents who were hosting the network’s coverage of the event called it “harsh” and “cringe-worthy,” as did several correspondents who were in the audience.

As was the case last year, I didn’t watch the dinner again this year, and it would appear that I made the correct choice. Having watched the video of Wolf’s routine my first question was, who the heck is Michelle Wolf anyway? Wikipedia tells me that she’s a writer and performer on The Daily Show, which explains a lot since that show hasn’t been nearly as good it was when Jon Stewart was hosting. In any case, my first reaction after watching the video above was that it wasn’t really that funny and you can tell the crowd wasn’t all that amused either by the reaction of the crowd, which became quieter and quieter as the 20-minute routine went on. In any case, I can see why some people may have found some of her remarks, especially those that appeared to be directed at things like Sarah Huckabee Sanders’s physical appearance and especially given the fact that, unlike when the President has appeared at these dinners, Sanders didn’t get a chance to respond in kind with her own jabs at the press.

Leaving aside the controversy that Wolf’s mostly not funny routine, which is likely to be the focus of much of the discussion regarding last night’s event, the main focus of the event was meant to focus on the press, the First Amendment, and the reporters who are out there working on a daily basis to do their jobs. In that regard, it’s worth congratulating journalists such as Maggie Habermann at The New York Times, who has become a target of many of President’s jabs at the media lately notwithstanding the fact that he has granted her interviews several times over the past year, and Jake Tapper and Jim Scuitto at CNN, all of whom were among the people who received well-deserved awards for their reporting over the course of the past year, a year made all the more difficult thanks to an Administration whose hostility to the media has been unlike anything ever seen before in Washington. The dinner also served as an occasion to hand out scholars to journalism students who will no doubt make their own marks on the media and political culture in the years to come.

That being said, I am drawn once again to something I wrote three years ago about this dinner and what it tells us about our political culture:

The entire atmosphere of the event has changed somewhat over the past two years since the President hasn’t attended and the invitation list has become far less celebrity obsessed, and that’s probably a good thing. On the whole, though, it seems as though this is an event that could do without the wall-to-wall coverage it got last night, and it could also probably benefit from finding someone funnier to deliver the jokes.