The United States and Russia have agreed to the framework of a deal to turn over Syrian chemical weapons. 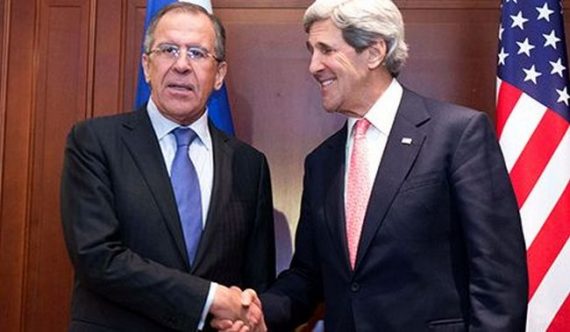 The United States and Russia have agreed to the framework of a deal to turn over Syrian chemical weapons.

The United States and Russia agreed Saturday on an outline for the identification and seizure of Syrian chemical weapons and said Syria must turn over an accounting of its arsenal within a week.

The agreement will be backed by a U.N. Security Council resolution that could allow for sanctions or other consequences if Syria fails to comply, Secretary of State John F. Kerry said.

Kerry said that the first international inspection of Syrian chemical weapons will take place by November, with destruction to begin next year.

Senior administration officials had said Friday the Obama administration would not press for U.N. authorization to use force against Syria if it reneges on any agreement to give up its chemical weapons.

The Russians had made clear in talks here between Foreign Minister Sergei Lavrov and Secretary of State John F. Kerry that the negotiations could not proceed under the threat of a U.N. resolution authorizing a military strike. Russia also wanted assurances that a resolution would not refer Syrian President Bashar al-Assad to the International Criminal Court for possible war-crimes prosecution.

President Obama has said that the unilateral U.S. use of force against Syria for a chemical attack last month remains on the table. But consideration of that action, already under challenge by a skeptical Congress, has been put on hold pending the outcome of the Geneva talks.

Details remain to be worked out and all of the expert analysis I’ve read indicates that, even if there are no political snags, the 2014 timeline for removal of the weapons is all but impossible logistically under the best of circumstances and absurd with a civil war underway.

Regardless, this is a win for all the parties who get a vote: President Obama gets a face-saving way out of the box he’s put himself in with his “red line” and then going to Congress; Congress doesn’t have to vote on the war authorization; President Putin gets to ride in and save the day; and Assad doesn’t get bombed, incredibly gently or otherwise.