The U.S. is now confirming that the Syrian government has used chemical weapons. What's next? 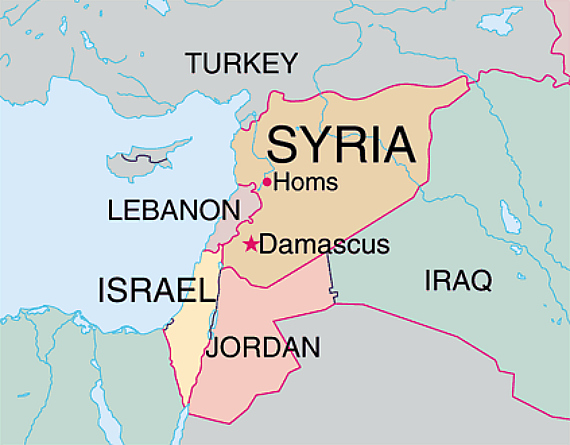 The United States is formally acknowledging that the regime of Bashar Assad has used chemical weapons against the rebels fighting against the government on several occasions, thus accusing Assad of crossing President Obama’s “red line”:

WASHINGTON — American and European intelligence analysts now believe that President Bashar al-Assad’s troops have used chemical weapons against rebel forces in the civil war in Syria, an assessment that will put added pressure on a deeply divided Obama administration to develop a response to a provocation that the president himself has declared a “red line.”

According to an internal memorandum circulating inside the government on Thursday, the “intelligence community assesses that the Assad regime has used chemical weapons on a small scale against the opposition multiple times in the last year.” President Obama said in April that the United States had physiological evidence that the nerve gas sarin had been used in Syria, but lacked proof of who used it and under what circumstances. He now believes that the proof is definitive, according to American officials.

But a flurry of high-level meetings in Washington this week only underscored the splits within the Obama administration about what actions to take to quell the fighting, which has claimed more than 90,000 people. The meetings were hastily arranged after Mr. Assad’s troops — joined by fighters from the militant group Hezbollah — claimed the strategic city of Qusayr and raised fears in Washington that large parts of the rebellion could be on the verge of collapse.

Senior State Department officials have been pushing for an aggressive military response, including airstrikes to hit the primary landing strips in Syria that the government uses to launch the chemical weapons attacks, ferry troops around the country, and receive shipments of matériel from Iran. But White House officials remain wary, and one American official said that a meeting on Wednesday of the president’s senior advisers yielded no firm decisions about how to proceed.

It is unclear precisely how the Obama administration made its final determination about the chemical weapons use in Syria. According to the internal memorandum, intelligence agencies have “high confidence” in their assessment, and estimate that between 100 and 150 people have died to date from chemical weapons attacks. The memorandum goes on to say that the conclusion is based on a variety of intelligence.

“Our intelligence community has high confidence in that assessment given multiple, independent streams of information,” the memorandum said.

The Obama administration’s cautious approach about Syria has already frayed relations with important American allies in the Middle East that have privately described the White House strategy as feckless. Saudi Arabia and Jordan recently cut the United States out of a new rebel training program, a decision that American officials said came from the belief in Riyadh and Amman that the United States has only a tepid commitment to supporting rebel groups.

Moreover, the United Arab Emirates declined to host a meeting of allied defense officials to discuss Syria, concerned that in the absence of strong American leadership the conference might degenerate into bickering and finger pointing among various gulf nations with different views on the best ways to support the rebellion.

This isn’t entirely new news, of course. Nearly two months ago, there were preliminary reports that the U.S. believed that the Syrians had used Sarin gas in small quantities but that there hadn’t been sufficient testing to confirm that veracity of those reports at that time. Prior to that, of course, the President had issued an explicit warning to the Syrians back in August 2012 when he stated that use of chemical weapons by the Syrians would be crossing a “red line.” While it wasn’t made clear at the time what the consequences for crossing this “red  line” would be, but there was much speculation that it would mean increased U.S. support for the rebels, and possibly even military action against Syria directed at the their chemical weapons stockpiles. As I noted after that initial report, it was fairly clear that the President’s decision to draw a “red line” was a mistake:

By saying that any use of chemical weapons by the Syrians was a “red line,” he created the impression that the U.S. would not tolerate even a single chemical shell being fired. The “red line” was vague  enough, though, that it was unclear exactly what the United States would do if the line was crossed,or even what kind of an act constituted crossing the line. Now that the Syrians have apparently engaged in the limited use of chemical weapons, the world expects the United States to do something and President Obama’s domestic opponents stand ready to pounce if they perceive that he’s backing down from the threat. Unfortunately for the President, backing down may be the smartest thing to do under the circumstances. For that reason, he may come to realize that drawing a “red line” over the use of chemical weapons wasn’t really a good idea after all.

In the immediate aftermath of that April announcement, there seemed to be signs that the Administration was slowly backing away from the “red line” rhetoric, a development that did not sit will with the interventionist crowd at all. However, there were several reports in May that the U.S. was considering sending arms to the Syrian rebels and “rethinking” its Syria strategy in other ways.  At the same time, though, the Chairman of the Joint Chiefs of Staff has been saying that additional military force might not accomplish much of anything in Syria and some reports indicated that arming the rebels would be likely to do nothing more than prolong a conflict that the rebels have been losing for some time now. There was even a report, which since seems to have been in error, that it was actually the rebels who used chemical weapons.

The question, of course, is what happens next. In a speech on the Senate floor shortly after this news became public, Senator John McCain claimed that President Obama had decided, based on this news, to start sending arms to the Syrian rebel. The the White House has not confirmed that, but CNN’s White House Correspondent is reporting that this is indeed correct. Other options would include a no-fly zone or even military strikes against chemical weapons sites in Syria. While we may not take those actions at this time, the obvious concern is that we’ll end up getting dragged further into this conflict. Even if our involvement stays limited to arming the rebels, though, that still leaves a numbers of unanswered questions. For example, and perhaps most importantly, who do we arm? The “rebels” are in reality a hodge podge of many groups under many different leaders and, recently, it’s the radicals and the groups from Iraq with ties to al Qaeda who have come to predominate the coalition. Do we really want to give those kind of people military aid? Even if we’re able to determine who the “good guys” among the rebels are, how do we ensure that the aid we provide doesn’t fall into the hands of the bad guys? Has anyone in Washington even bothered to think any of this through.

I don’t deny that Syria is a tragedy, but not every tragedy demands that the United States ride to the rescue. For example, in the 1990s, the civil war in Rwanda led to massive numbers of deaths in what turned into a Tutu-Hutsi bloodbath. President Clinton didn’t intervene in that conflict, for what I would argue were wise reasons, but reports now indicate that it is one of the decisions of his Presidency that he regrets. Notwithstanding the horrible legacy of that war, Clinton is wrong to have any regrets. The idea of the United States intervening in a tribal war in the middle of Africa is as absurd now as it was then. In all likelihood, U.S. involvement in Rwanda would have just made a bad situation worse. And, that’s why we ought to keep our noses out of the tragedy in Syria.

Update: The Wall Street Journal is reporting that the options that Administration is planning appear to go far beyond simply sending arms to rebel groups:

WASHINGTON—A U.S. military proposal for arming Syrian rebels also calls for a limited no-fly zone inside Syria that would be enforced from Jordanian territory to protect Syrian refugees and rebels who would train there, according to U.S. officials

Asked by the White House to develop options for Syria, military planners have said that creating an area to train and equip rebel forces would require keeping Syrian aircraft well away from the Jordanian border.

To do that, the military envisages creating a no-fly zone stretching up to 25 miles into Syria which would be enforced using aircraft flown from Jordanian bases and flying inside the kingdom, according to U.S. officials.

The White House is currently considering proposals to arm the rebels in Jordan, according to U.S. officials. White House National Security Council spokeswoman Caitlin Hayden declined to comment on the details of those deliberations.

Officials said the White House could decide to authorize the U.S. to arm and train rebels in Jordan without authorizing the no-fly zone recommended by military planners. A White House announcement could come soon, officials said.

Jordan has been inundated by a flood of refugees that Jordanian and U.S. officials say is a growing threat to the kingdom, a key U.S. ally in the region. The U.S. has already moved Patriot air defense batteries and F-16 fighter planes to Jordan, which could be integral to any no-fly zone if President Barack Obama approves the military proposal.

Proponents of the proposal say a no-fly zone could be imposed without a U.N. Security Council resolution, since the U.S. would not regularly enter Syrian airspace and wouldn’t hold Syrian territory.

I wonder if the President will seek Congressional authorization for such an operation, as the Constitution and the War Powers Act would seem to require him to.