Pakistani Religious Affairs Minister Ijaz-ul-Haq declared that terrorism was “justified” in response to Salman Rushdie being awarded a knighthood by Queen Elizabeth.

Pakistan demanded on Monday that Britain withdraw a knighthood awarded to author Salman Rushdie, as a government minister said the honour gave a justification for suicide attacks by Muslims.

Angry protesters in several cities torched British flags and beat them with their shoes in protest at the accolade for the Indian-born writer of “The Satanic Verses” and chanted “Death to Britain, death to Rushdie.”

Rushdie, 59, was forced to go into hiding for a decade after Iran’s Ayatollah Ruhollah Khomeini in 1989 issued a death sentence over his book “The Satanic Verses,” claiming it insulted Islam. Iran has already accused British leaders of “Islamophobia” after Rushdie — now Sir Salman — was awarded the knighthood by Queen Elizabeth II on Saturday to mark her 81st birthday.

“If somebody has to attack by strapping bombs to his body to protect the honour of the Prophet, then it is justified,” Pakistani Religious Affairs Minister Ijaz-ul-Haq told the national assembly. The minister, the son of military dictator Zia-ul-Haq who died in a plane crash in 1988, later retracted his statement in parliament and said he meant to say that knighting Rushdie could spark terrorism. “I was explaining that if the British government awards a knighthood to Salman Rushdie — whose only credibility is that he wrote a blasphemous book — then such action with encourage extremism,” he told AFP. “If someone blows himself up he will consider himself justified. How can we fight terrorism when those who commit blasphemy are rewarded by the West?” he said.

He said Pakistan should sever diplomatic ties with Britain if it did not withdraw the award, adding: “We demand an apology by the British government. Their action has hurt the sentiments of 1.5 billion Muslims.

I’m not sure what Rushdie has done to merit a knighthood and it’s hardly surprising that Muslim fanatics have been sparked to riot over this; after all, we saw weeks of rioting and several deaths over some newspaper cartoons. Still, it goes without saying that the Brits have every right to decide which of their artists to honor in this way.

This is further evidence, if any were needed, that Pakistan is a poor ally, indeed, in the battle against Islamist extremists. We’ll see if Pervez Musharraf expels ul-Haq from his cabinet and disavows these remarks. My guess is that he won’t. 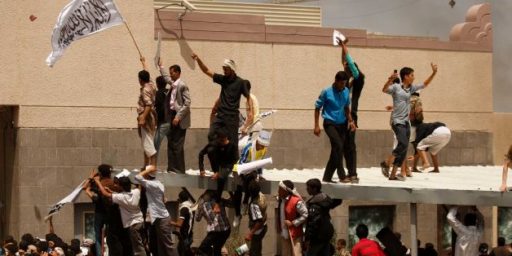 Obama’s Timidity In The Face Of Extremism