How the reelection incentive and parliamentary procedure are affecting the debt ceiling debate in Congress. 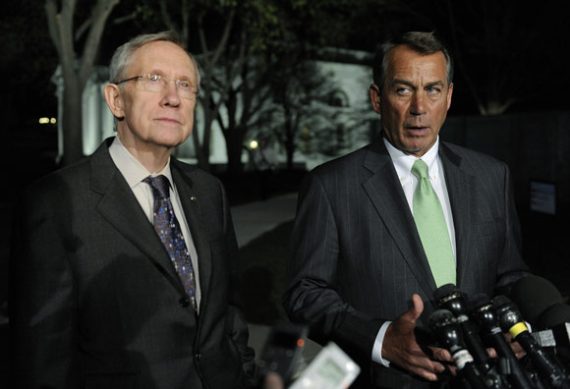 Political scientist David Mayhew once wrote that members of Congress are “single-minded seekers of re-election”; in other words, if we want to understand Congress, we need to understand the electoral incentives that members face. The role of reelection in the current debate over raising the debt ceiling is obvious; for every Republican congressman who may get redistricted out of his seat for refusing to play ball with the leadership, there are several others who quite reasonably fear that bucking the Tea Party and Grover Norquist may lead to a primary challenge to their right. Since John Boehner and his allies can’t threaten to redistrict all of the Tea Party Caucus out of Congress, he has to work out a deal that will protect rank-and-file Republicans while at the same time ultimately producing a bill that can get to the president’s desk.

Much of the commentary (including some here at OTB), however, has made the assumption that the bill the House passes has to be pretty close to what comes out of Congress at the end. And while it is easier to build a coalition to pass such a bill, in the sense that you only need to assemble one winning majority under those circumstances, the reality is that political circumstances aren’t going to allow that to happen. Rounding up a majority now for what will be palatable to the Senate majority and president has been demonstrated over the past few weeks as impossible. But the House is constrained, by rules and tradition, to pass something for the process to move forward.

That’s where parliamentary procedure comes in. Whatever compromise is adopted will affect taxes and spending. It is rather well-known that Article I of the Constitution requires that revenue bills originate in the House of Representatives; what is less well-known is that, by tradition, the House also originates all spending bills and by standing procedure will not consider a spending bill that originates in the Senate. Hence the ultimate compromise bill must originate in the House of Representatives, at least in some form. That requires a bill that can at least be amended into a compromise to pass. As Doug Mataconis notes today, the House just did its part by passing a bill that the Senate can now act on.

So that’s the first step. What happens next? The Senate must adopt a bill as well, either as an amendment to the House version of the bill or its own freestanding bill. But the Senate operates under its own constraints, most notably the threat of a filibuster. Hence whatever passes the Senate must be palatable to at least 60 senators. It is of course, extremely unlikely that 60 senators will approve of the bill the House passed today, but again all that needs to happen for the process to move forward is for the Senate to approve something that involves revenues and spending.

After that the traditional “how a bill becomes a law” chart says that the House and Senate will appoint members of a conference committee to work out the differences. In modern practice things don’t really work that way; a pro forma conference committee, comprised of senators and representatives loyal to the leadership, will eventually meet, but only to ratify a deal that is made elsewhere among the congressional leadership and senior White House officials (perhaps including the president in person, perhaps not). Importantly, the deal that’s worked out here only needs to accomplish three things:

What’s notable here is that the conference version of the bill ultimately doesn’t have to be approved by the same legislators who approved the House and Senate bills originally. This allows Republicans fearful of Tea Party retribution to argue that they voted for the original House bill, even though that’s not what ultimately will pass, and they’ll also be able to say they voted against ultimately increasing the debt ceiling. It also allows Democrats some political cover for supporting a spending cuts package along with the debt ceiling increase; after all, what Democratic primary opponent can criticize a Democrat for voting for the conference version of the bill, especially if the president signs it?

The trick now is for a House majority to support what comes out of the conference committee. The good news for Bohener is that the hard part of his job is done: while he may have to tack a little to the left for a few days his new ally Barack Obama will be doing a lot of the heavy lifting with the Democrats; Boehner just needs to deliver a few dozen Republican votes when the conference is done.

And the price the Republicans will pay for their brinkmanship? Getting the Democrats to own both the debt ceiling increase (unpopular with moderates) and spending cuts without much in the way of tax increases (unpopular with the Democratic base). For all the alleged craziness and irrationality going on in their caucus, it seems like a pretty good deal for Republicans to me.