Factions on the right and left continue to charge one another with trying to politicize the Tucson murders. They're now nitpicking the memorial service. 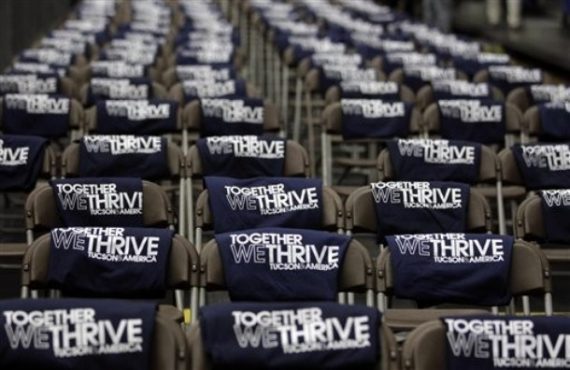 Factions on the right and left continue to charge one another with trying to politicize the Tucson murders.  After several days of back-and-forth over whether Sarah Palin, the Tea Party, and conservative talk radio somehow contributed to the “atmosphere” that set off the nut who perpetrated this awful crime — with President Obama finally proclaiming that it wasn’t exactly their fault, but we should nonetheless strive to be more civil and honest — we’re now getting to nitpicking the memorial service.

First, there was a kerfuffle over whether new Speaker of the House John Boehner “snubbed” the victims by declining to ride there with the president.   But, a little research showed that Boehner was actually presiding over a memorial service in the Capitol.

Then, there was the charge that the president lied when he claimed that Rep. Gabrielle Giffords had opened her eyes for the first time since the shooting that very evening.  (I must confess, thoughts fleetingly crossed my cynical mind that this might be a bit too good to be true.)  But her doctors explained that away pretty convincingly and, in any event, it wouldn’t have been a “lie” had he been technically wrong.

The latest hubbub is the charge by Michelle Malkin that the event was “branded,” complete with a theme (“TOGETHER WE THRIVE: TUSCON AND AMERICA”), t-shirts, and programs and that this was the work of “Democrat stage managers.”  But, while I find the idea of handing out branded t-shirts at a memorial for six people, including a 9-year-old girl, who had recently been murdered, a spokesman for the University of Arizona, which hosted the event, said it “was the university’s idea” and that “We wanted to give people something to remember, to symbolize the community spirit.”  You’d think the horror of the murders and a speech by the president of the United States would have sufficed in that regard.  In any event, they vow “Branding of the event was not done in consultation with the White House, or any elected officials or political organization,” adding “Once the president accepted an invitation, he said, the White House helped coordinate some logistics, such as security, but that was the extent of the White House involvement.”

This strikes me as more plausible than that Obama’s team made such a baffling choice.

All of this is dispiriting.  Yes, high profile tragedies like this invariably spark conversations about the tenor of our political debate, our gun laws, our mental health system, and various and sundry policy issues.   But it’s just unseemly to engage in this bickering before the bodies are even buried and the status of all the victims is known.

Doug Mataconis, Dan Collins, Fausta Wertz and others are having an interesting back-and-forth this morning on the “appropriate” tenor of these memorials.   Doug’s alone in holding a pure “it’s none of my business how people chose to grieve” position.   For my own part, I’d think it slightly odd but wouldn’t feel the need or even the right to comment on it if the families themselves had gotten together and decided they needed a slogan and t-shirts.   When state institutions are planning the event, and the president of the United States is speaking, it’s national news.

Still, it shouldn’t be about scoring political points but rather a national conversation on how to react to tragedies like this and, hopefully, make them more rare.