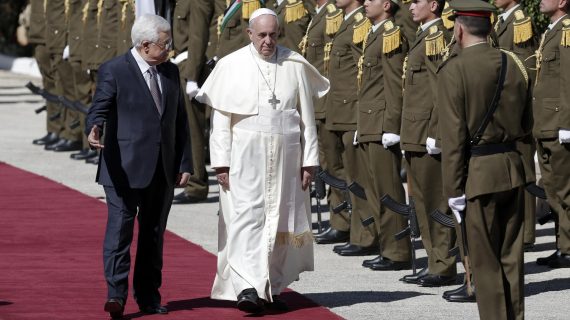 Before Pope Francis departed on his trip to Jordan, the West Bank, and Israel, there was much speculation that he’d end up stirring up some news in the area, and it turns out that speculation was correct:

BETHLEHEM, West Bank — Arriving here on Sunday, Pope Francis made an impassioned appeal for an end to the Israeli-Palestinian conflict and gave the Palestinians an uncommon boost by openly endorsing “the State of Palestine.”

Francis called for “a stable peace based on justice, on the recognition of the rights of every individual, and on mutual security,” and for intensified efforts for the creation of two states — meaning a Palestinian state alongside Israel — within internationally recognized borders.

“In expressing my closeness to those who suffer most from this conflict, I wish to state my heartfelt conviction that the time has come to put an end to this situation, which has become increasingly unacceptable,” he said in remarks after a meeting with President Mahmoud Abbas of the Palestinian Authority.

Referring to Mr. Abbas as “a peacemaker,” the pope then attested to “the good relations existing between the Holy See and the State of Palestine,” according to an official translation of the speech provided by the Holy See press office.

In most respects this statement isn’t really all that different from the Vatican’s position on Middle East peace and the Israeli/Palestinian conflict as it has been expressed by previous Popes. However, the fact that the comments were made in the West Bank is fairly significant. What impact it will actually have on the peace process, though, is an entirely different question.

Ostensibly, the purpose of the Pope’s visit to the Middle East is to mark the 50th Anniversary of an appearance there by Pope Paul VI and the Patriarch of Constantinople. That meeting with Patriarch Bartholomew will happen later today. However, comments like this are likely to draw far more attention, especially since Israeli President Peres and Palestinian President Abbas have accepted an invitation to meet at the Vatican:

JERUSALEM — The offices of the Israeli and Palestinian presidents are confirming that they have accepted an invitation from Pope Francis to visit the Vatican together next month.

At the end of an open-air Mass in the biblical town of Bethlehem on Sunday, Francis invited the Israeli and Palestinian leaders to the Vatican to pray for peace.

The offices of Palestinian President Mahmoud Abbas and Israeli President Shimon Peres both said they would attend.

Given that the real political power in Israel lies with Prime Minister Benjamin Netanyahu, this is more of a symbolic visit than anything substantive, but diplomacy is often built on symbolism.