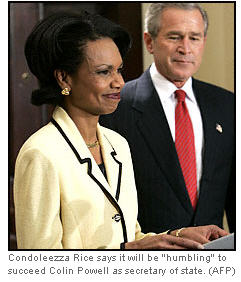 President Bush nominated national security adviser Condoleezza Rice as his new secretary of state today, choosing one of his closest aides to take over the top-ranking post in his Cabinet and guide the nation’s foreign policy in his second term. In announcing his choice of Rice to succeed Secretary of State Colin L. Powell, Bush said he has “relied on her counsel, benefited from her great experience and appreciated her sound and steady judgment” for the past four years. “The secretary of state is America’s face to the world, and in Dr. Rice the world will see the strength, grace and decency of our country,” Bush said in the Roosevelt Room of the White House. As Bush praised her, mentioning her upbringing in segregated Alabama, tears welled in Rice’s eyes. Bush also hailed Powell, who announced his resignation yesterday, as a statesman who had helped to rally the world in a global war on terrorism, acted to resolve dangerous regional conflicts and confronted the challenges of hunger, poverty and disease in the developing world.

In brief remarks after being introduced by Bush, Rice said it was “humbling” to succeed Powell and that she looked forward to pursuing the president’s “hopeful and ambitious agenda” in her new role. She said to Bush, “Under your leadership, America is fighting and winning the war on terror.” After her speech, she and Bush left the room without taking questions from reporters.

The nomination of Rice, who turned 50 on Sunday, is subject to confirmation by the Senate. Powell, 67, a highly regarded former Army general, said yesterday he was willing to stay on as secretary of state for weeks or months until his replacement is confirmed. Sen. Richard Lugar (R-Ind.), the chairman of the Senate Foreign Relations Committee, hopes to hold a confirmation hearing in early December, news agencies reported.

Bush said Rice’s deputy at the National Security Council, Stephen J. Hadley, 57, will take over as national security adviser, a post that is not subject to Senate confirmation.

If confirmed, Rice, the only daughter of a Presbyterian minister from Alabama, would become the first African American woman to head the State Department, taking a Cabinet position that ranks fourth in the line of succession to the presidency and that, as Bush noted, was first held by Thomas Jefferson.

Rice was the obvious choice, if not necessarily the most dramatic. Picking a moderate Democrat such as Joe Lieberman or Joe Biden would have been especially bold and picking someone from outside the current team would have indicated some acknowledgement that all hasn’t been right on the foreign policy front in this Administration. Still, there is much upside to choosing Rice, even aside from the “first African American woman to head the State Department” superlative. Having a similar vision among the top players will ensure that everyone is operating out of the same playbook. One hopes, though, that senior deputies are brought in who will offer competing viewpoints without fear of reprisal.

CSM’s Howard LaFranchi argues this point in piece for tomorrow’s edition, “Rice solidifies the president’s foreign-policy stance.” The thesis is encapsulated in the subtitle: Powell was respected for his moderation, but Rice could give State Department views more airing at White House.”

With Colin Powell nudged out and Condoleezza Rice moving from the White House to become secretary of State, President Bush solidifies his foreign-policy team around the core principles of American power and mission that guided his first term. The move signals even tighter control of the administration’s hard line over foreign policy – but it also may mean relatively little change in the direction the US takes in the world, since this wing was already in control.

As one of Mr. Bush’s closest confidantes, Ms. Rice leaves the helm of the White House national-security team to take over the reins of diplomacy at a time when many of the president’s staunchest conservative supporters question the loyalty of the State Department bureaucracy to Bush policies. Many see Rice’s move to Foggy Bottom as an effort to ride herd on foreign-policy dissidents – a task in which Rice would be aided by the anticipated rise of John Bolton, currently undersecretary for arms control and international security.

Such unity of thinking and purpose has its good points and drawbacks, former officials and policy analysts say. For one thing, it means foreign leaders working with Rice will know they have someone who has the president’s ear. With Mr. Powell, they had someone they respected, but who they knew was the odd man out in the foreign-policy team.

On the other hand, Bush will no longer have the voice in the room that says, “Wait a minute,” and offers the kind of caution that can help head off mistakes and encourage humility, others say. Still, some experts say that points of view will still vary – they just might not be so public. “I don’t think everyone will ever sing from the same hymnal in any cabinet,” says Danielle Pletka, a foreign-policy expert at the American Enterprise Institute in Washington, and an administration insider.

If confirmed, Mr. Bolton’s rise to Rice’s deputy would further solidify the hard-line direction of the foreign-policy team. Bolton clashed with Powell on the approach to take with both North Korea and Iran on their nuclear programs, favoring a tougher stance when Powell advocated direct negotiations.

For those who wondered whether Bush in his second term would revert to a more traditionally Republican realism in world affairs or would forge ahead with a forceful global activism, the answer came with rapid-fire swiftness this week.