Prosecutors as asking a Judge to dismiss all charges against Dominique Strauss-Kahn, because that's their only option. 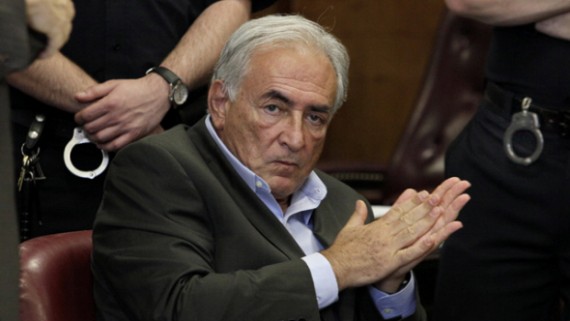 As expected, the prosecutors in the Dominique Strauss-Kahn case have asked the presiding judge to dismiss all the charges against him based on the fact that they no longer believe that they can prove his guilt beyond a reasonable doubt:

Prosecutors from the Manhattan district attorney’s office formally moved on Monday to dismiss the three-month-old sexual assault case against Dominique Strauss-Kahn, filing a 25-page motion that serves as their intricate and devastating anatomy of a case collapsing.

The document laid out how prosecutors went from characterizing Mr. Strauss-Kahn’s accuser as a credible woman whose account was “unwavering” to one who was “persistently, and at times inexplicably, untruthful in describing matters of both great and small significance.” Because eventually prosecutors could no longer believe her, they wrote, they could not ask a jury to do so.

Prosecutors said they had accumulated enough evidence to show that Mr. Strauss-Kahn, who was managing director of the International Monetary Fund at the time of his arrest, “engaged in a hurried sexual encounter” with his accuser, a housekeeper at the Sofitel New York, a hotel near Times Square.

Because none of the evidence established force or a lack of consent, the motion said, the case would hinge on the testimony of the woman, Nafissatou Diallo.

Ms. Diallo’s account of what happened during and after the alleged assault began to develop inconsistencies, however. Even more troubling to prosecutors was what they said was a “pattern of untruthfulness” about her past.

That included a convincingly delivered story of being gang raped by soldiers in her native Guinea; she later acknowledged that she had fabricated the story, and prosecutors characterized her ability to recount a fictionalized sexual assault with complete conviction as being “fatal” to her credibility.

Another issue was that she had denied that she was interested in making money from the case, despite a recorded conversation that prosecutors said captured her discussing just that with her fiancé, a detainee in an immigration jail in Arizona, shortly after the encounter in the hotel.

The document, filed in State Supreme Court in Manhattan, asks Justice Michael J. Obus to dismiss the seven-count indictment against Mr. Strauss-Kahn. Justice Obus is expected to comply with the request on Tuesday.

Not surprisingly, Diallo’s lawyer, who has been unusually outspoken in his negative comments about the District Attorney’s office even before rumors of a dismissal started to circulate, is not pleased and has filed his own motion with the court seeking to have the Manhattan D.A. removed from the case and a Special Prosecutor appointed, a request that is highly unlikely to be granted. The D.A. himself, Cyrus Vance, Jr., is also facing criticism from local women’s groups for alleged insensitivity to a rape victim. However, as Ken White, a fellow attorney, points out in his own excellent post on the case, much of the negative reaction to decisions like this stems from a fundamental misunderstanding of what the Criminal Justice system is supposed to do:

To many people — perhaps even to most people — a criminal justice system is not about separating the factually guilty from the factually innocent. It’s about delivering the result that matches their preconceptions and prejudices. That’s true of people infuriated that Casey Anthony was acquitted. It’s true of people who believe that “terrorists” don’t deserve a trial because the fact that the government has accused them means they are a terrorist and that they have no right to one. And, as we saw in Duke Lacrosse case, it’s true of some people who believe that an accusation of rape is inherently overwhelming proof of guilt.

We saw similar reactions, of course, in the aftermath of Casey Anthony’s acquittal on murder charges last month and, at that time, I noted that the criminal justice system isn’t really about “justice” in the moral sense at all:

The criminal justice system is about a quest for the truth within the bounds of the law, not a quest for “justice” for the victim. That means, for example, that evidence that doesn’t meet the applicable evidentiary standard won’t get before the jury, that statements the Defendant made to the police while in custody but without being advised of their rights will be excluded, and that protection of the Defendants constitutional rights will bar the introduction of illegally seized or unreliable evidence. Some of that evidence might arguably to a quest for “justice,” but it’s not relevant to a quest for truth within the bounds of the law. If you’re looking for “justice” for the victim, you’ll have to search somewhere else because it won’t come from a courtroom.

In this case, Strauss-Kahn, like every other criminal Defendant is innocent until proven guilty and he’s charged with a crime that, when you come right down to it, is a crime of consent. There doesn’t seem to be much question that Strauss-Kahn and Diallo had some sort of sexual encounter in his hotel room that day in May, the question that the jury would be required to decide is whether or not it was a consensual encounter or a forcible one, and it would be the prosecutions burden to prove that element of their case beyond a reasonable doubt.

It’s been said in the media coverage of this case that it comes down to a “He said v. she said” case, with Diallo claiming she was raped and Strauss-Kahn presumably claiming the encounter was consensual, but that characterization actually misses the point of the problem the prosecutors case. In the end, a trial on these charges would have come down almost solely to a “she said” case, with Diallo’s testimony being the lynch pin of the entire matter. Strauss-Kahn wouldn’t be required to testify at all and, depending on how the prosecutions case had gone, it’s quite probable that he would not have done so. Therefore, the entire case would’ve come down to Diallo’s testimony, which makes the doubts that have come out about her credibility, and even her version of the events of that May afternoon, crucial to the prosecutors decision to drop the case.

The prosecutors state it quite clearly at the beginning of their 25-page motion:

At the time of the indictment, all available evidence satisfied us that the complaint was reliable. But evidence gathered in our post-indictment investigation severely undermined her credibility as a witness. That an individual has lied in the past or committed criminal acts does not necessarily render them unbelievable as a prosecution witness or keep us from putting them on the witness stand. But the nature and number of the complainants falsehoods leaves us unable to credit her version of events beyond a reasonable doubt, whatever the truth may be about the encounter between the complainant and the defendant. If we do not believe her beyond a reasonable doubt, we cannot ask a jury to do so.

Under any view of the available evidence, the People remain unable to elicit a consistent narrative from the complaint regarding her actions surrounding the charged incident — issues that would be central at trial. Not only does this impair her reliability as a witness, but these varying accounts also make it difficult to ascertain what actually occurred in the critical time frame between 12:06 and 12:26 and we have no confidence that the complainant would tell the truth on this issue if she were called as a witness at trial.

That last point is perhaps the most crucial from the prosecutor’s point of view given the fact that lawyers in general, and prosecutors in particular, have an ethical duty not to present false testimony or evidence to a court. Ethically, the prosecutors could not have but Diallo on the stand because they had reason to believe that she’d lie, either on direct examination or under what would have undoubtedly been a withering cross-examination from Strauss-Kahn’s attorney.

As I’ve said before, in the end I don’t think that the prosecutors really have any other choice in this case other than to dismiss it. Based on the revelations that have come out  putting Diallo’s credibility in doubt, there’s simply no way that they’d be able to attain a conviction here. In fact, there’s even a chance that Strauss-Kahn’s attorneys would have been able to get the case dismissed before it ever made it into the jury’s hands due to the prosecutors failure to prove its case. Dismissing the case now is politically embarrassing for the Manhattan D.A., who is an elected official, but it would have been just as bad to take the case to trial and lose. More importantly, this case isn’t about “justice for Diallo,” as some of her supporters are putting it, it’s about justice in the abstract. Putting Strauss-Kahn on trial when they don’t believe they can win the case would have been an improper and unethical act on the part of the prosecutors, and he’s entitled to justice himself.