Get the popcorn and your favorite beverage ready.

The House Intelligence Committee announced this afternoon that the first public hearings in the ongoing impeachment investigation against the President would begin next week, starting a process that is sure to put impeachment on the front burner for the remainder of the year:

The House will begin holding public impeachment hearings next week, Democrats announced Wednesday, a move that marks the end of the closed-door phase of their inquiry and brings lawmakers one step closer to impeaching President Donald Trump.

The second hearing will take place two days later, on Nov. 15; Marie Yovanovitch, who was pushed out as the U.S. ambassador to Ukraine after a smear campaign backed by Trump, is slated to testify.

The Intelligence panel is expected to hold several additional public hearings as Democrats seek to make the case that Trump abused the power of his office when he pressured Ukraine’s leaders to investigate his political opponents.

“Those open hearings will be an opportunity for the American people to evaluate the witnesses for themselves, to make their own determinations about the credibility of the witnesses, but also to learn first-hand about the facts of the president’s misconduct,” Schiff told reporters.

Investigators are also still hearing testimony from witnesses behind closed doors, with David Hale, the third highest-ranking official at the State Department, appearing on Wednesday.

Democrats consider Taylor and Yovanovitch among the most compelling witnesses to Trump’s efforts to pressure Ukrainian officials to investigate his political rivals, which is central to the impeachment inquiry.

“I think you will see throughout the course of the testimony — not only their testimony but many others — the most important facts are largely not contested,” Schiff said.

This will mark an important turning point in the impeachment investigation in that it will move a process that has largely taken place behind closed doors out into public. From this point forward, Americans will be able to hear for themselves what until now has only been reported on by television and print reporters or in the written statements that have been released to the public. It is expected that, eventually, all of the people who have testified behind closed doors — including people such as Lt. Col. Richard Vindman, Ambassador William Taylor, Ambassador Maria Yovanoctich, and Ambassador Gordon Sondland — will be testifying in public regarding their knowledge of the Trump Administration’s demands that Ukraine investigate both Hunter and Joe Biden and the discredited conspiracy theory that it was the previous Ukrainian government that interfered in the 2016 election to aid the Clinton campaign rather than the Russians in aid of the Trump campaign.

These hearings will differ significantly from previous hearings that we’ve seen, and it will do so in ways that are likely to make it easier for members of the general public to understand what’s going on. First of all, rather than questioning being conducted exclusively by Committee members, the principal questioning would be conducted by Majority and Minority Staff Counsel. Additionally, for at least the first round of questioning each questioner, including staff counsel, would get 45 minutes to use as they choose. For those who remember the Iran/Contra Hearings in 1987, this is similar to the procedure that was used then and it has the advantage of allowing questioners to develop a line of questioning in a way that the previous procedure of limiting each member to five minutes each simply doesn’t. This is a positive development that will allow the hearings to be far more substantive than they have been in the past.

It’s unclear how long this part of the process will last, but given the number of witnesses that the committee wants to hear from it is likely that this period will extend beyond Thanksgiving and into December. What this means for the overall impeachment calendar is unclear, but it does cast doubt on the idea that there will be a floor vote on impeachment before Christmas. In any case, get the popcorn or other snacks of choice, and whatever beverages you may prefer, ready because the truly historic part of this is about to start. 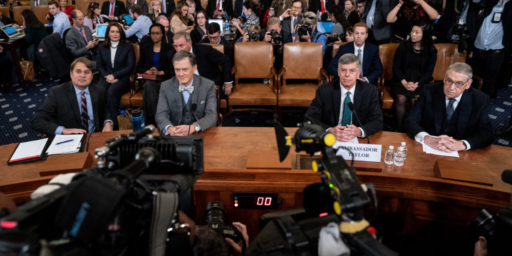