Rand Paul's initial mis-steps after winning the Republican primary seem to be largely behind him.

Rand Paul’s initial mis-steps after winning the Republican primary seem to be largely behind him if the latest poll is to be believed:

The latest results are almost identical to those found in three surveys conducted in July and June. With the exception of a big bounce immediately after his primary win, Paul has received between 46% and 50% support in match-ups with Conway since January. During the same period, Conway has earned between 34% and 42% of the vote.

When leaners are included in the new totals, Paul attracts 51% of the vote, while Conway picks up 41%. This is the first Rasmussen Reports Election 2010 survey in Kentucky to include leaners. Leaners are those who initially indicate no preference for either of the candidates but answer a follow-up question and say they are leaning towards a particular candidate.

Most recently, Paul weighed in on the “Ground Zero Mosque” story and, after first stating that he considered it a local New York issue, he later said that he did not believe the mosque should be built. Now, I’ve raked Paul over  the coals a bit over at my personal blog for this, but I think it’s fairly certain that Paul’s position is going to help him politically. Unfortunate, but true.

As we head into the final months of the campaign, Paul seems well-positioned to keep the seat in Republican hands: 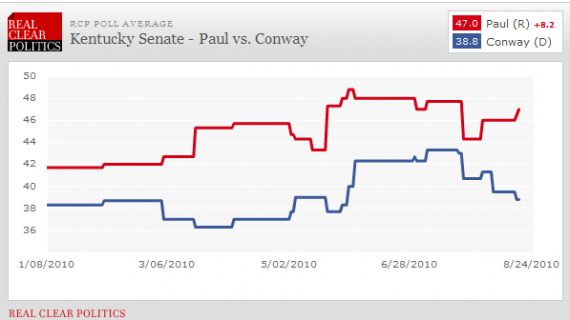 Of course, anything can happen.