It would be fitting but, alas, won't happen.

Way back on February 22, at the onset of the unprovoked Russian invasion of Ukraine, I observed, “In an ideal world, I would like to strip Russia of its status as a permanent member of the UN Security Council. It has consistently shown itself unwilling to play by the most fundamental rules of the system. But, realistically, there’s no mechanism for making that happen.” Six weeks later, in response to gross atrocities and war crimes, we may be about to find out.

Ukrainian President Volodymyr Zelensky in a dramatic video appearance at the United Nations called on the body to remove Russia from the Security Council days after evidence circulated of executions and other atrocities committed by Russian troops in his country.

Zelensky said Russia should be removed from its place as a permanent member of the Security Council, where it holds veto power, arguing that it was time to reform the global peace-keeping body.

“We are dealing with a state that is turning the veto [in] the U.N. Security Council into the right to die,” Zelensky said in his remarks. “This undermines the whole architecture of global security and allows them to go unpunished.”

“The main thing is today, it’s time to transform the system, the United Nations,” he told the Security Council.

Days after President Biden instinctively called Putin a “war criminal” only to have his people walk it back, the administration looks to be making that official policy. WaPo (“U.S. envoy to U.N. calls to kick Russia out of Human Rights Council“):

U.S. Ambassador to the United Nations Linda Thomas-Greenfield urged nations on Tuesday to vote to suspend Russia’s membership in the U.N. Human Rights Council amid reports of mass atrocities in the Kyiv suburb of Bucha.

“Russia should not have a position of authority in a body whose purpose is to promote respect for human rights,” Thomas-Greenfield said at a meeting of the U.N. Security Council. “Not only is it the height of hypocrisy, it is dangerous. Russia is using its membership on the Human Rights Council as a platform for propaganda to suggest Russia has a legitimate concern for human rights.”

The suspension would require a two-thirds vote by the 193-member General Assembly and is a move reserved for countries that persistently violate human rights.

“It undermines the entire U.N. And it is just plain wrong. Let us come together to do what is right — and to do right by the Ukrainian people,” she said.

Alas, the UNHRC has had all manner of rogue states among its membership over the years and, thus, has very little credibility. And removing Russia from it is a far cry, indeed, from stripping it of the permanent membership on the UNSC that gives it the status of one of the world’s key players.

Ousting Russia from the community of nations would be a just outcome here but it’s just incredibly unlikely. While most Western democracies have been courageous in standing up to its aggression, there’s little evidence that China will do so any time soon. After all, it hardly wants to establish a precedent requiring conformity with human rights law to remain in good standing.

Beyond that, as I’ve noted before, it’s just incredibly unlikely that Putin will face any legal accountability for his crimes. NPR’s Bill Chappell runs through a myriad of options but, alas, none of them are promising. Short of being ousted from power by his own people and turned over—which I don’t see happening—there’s just no mechanism for punishing heads of state of major powers unless they’re defeated in war.

UPDATE: Daniel Larison points me to this explainer by Joris van de Riet titled “No, Russia cannot be removed from the UN Security Council.” Some key points:

One of the more obvious issues plaguing international responses to Russia’s invasion of Ukraine has been the fact that Russia possesses a veto power in the United Nations Security Council. The UN Charter confers upon the Security Council the ‘primary responsibility for the maintenance of international peace and security’, which includes the right to take forcible action (whether military or in the form of sanctions) under Chapter VII of the Charter. The five permanent members of the Security Council — Russia, China, the United States, United Kingdom, and France — each have a veto over these decisions. Thus, Russia was able to veto a draft resolution condemning its own invasion in Ukraine.

Another way of ‘dealing’ with Russia in this case – though admittedly not the most subtle of ways – would be to expel Russia from the UN pursuant to Article 6 of the Charter for ‘persistent violation’ of the principles of the Charter. The UN would not be the first international organisation to take action along these lines: the Council of Europe suspended Russia’s right of representation one day after the invasion and subsequently expelled the country. Expulsion from the UN, however, requires a vote by the General Assembly upon the recommendation of the Security Council – in which Russia, of course, has a veto. The rather radical option of amending the Charter to remove any reference to Russian membership runs into a similar issue: Article 108 of the Charter requires that any amendments be ratified by two thirds of the Members, including all five permanent members of the Security Council.

The bottom line is that the organization was designed to have the World War II victors as permanent overseers and the fact that two of the governments (the USSR/Russia and China/PRC) have changed radically since 1945 is immaterial. Much the way that the United States is hamstrung by the politics of 1787 today, the Charter has somewhat been overtaken by events. 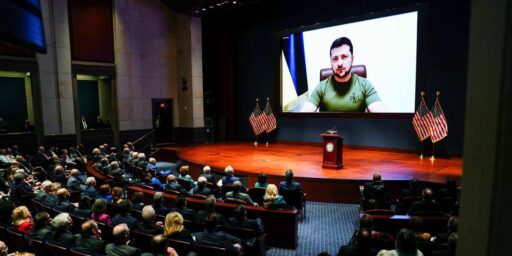