Republicans Risk Getting The Blame If DACA Fix Fails

A new poll suggests that Republicans would get the blame if Congress fails to pass a bill to protect DACA beneficiaries. 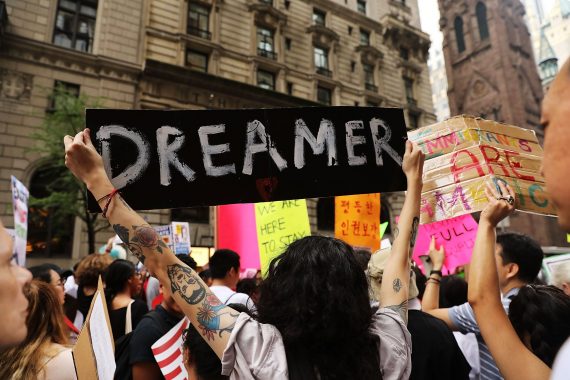 A new poll indicates that a majority of Americans would blame Republicans if Congress fails to find a way to protect the beneficiaries of the Deferred Action For Childhood Arrivals (DACA) program:

A majority of Americans says that Republicans would bear most of the responsibility if Congress fails to resolve the fate of the so-called Dreamers by a looming deadline, according to a new Quinnipiac University poll.

Fifty-eight percent of respondents said Republicans would shoulder the blame if lawmakers cannot reach an agreement to codify the protections for recipients of the Obama-era Deferred Action for Childhood Arrivals (DACA) program.

Significantly fewer respondents – just 26 percent – said that Democrats should be blamed if a DACA deal isn’t reached, according to the new poll.

Looking deeper into the poll, the numbers also show widespread public support for Congressional action on the DACA issue, suggesting that it could become a problem for Republicans in the fall if Congress fails to act. On the question of who would be blamed, as noted most self-identified Democrats would blame Republicans if DACA reform fails and a majority of Republicans would blame Democrats. Among self-identified Independents, 57% would blame Republicans while 26% would blame Democrats. On the general question of DACA reform itself, 80% of those surveyed say that they support allowing DACA beneficiaries to stay in the country and eventually become citizens while just 16% oppose the idea. Among Democrats, the division is 94% supporting the idea and only 5% oppose it, while 82% of Independents support it while only 14% oppose it. A DACA fix is even supported by a majority of Republicans, with 59% saying they support legal status that eventually leads to citizenship for the beneficiaries while 37% oppose it.

This polling comes with Congress facing an ostensible deadline of March 5th to act before DACA formally comes to an end and the prospect of Dreamers being arrested and deported becomes more of a reality. For the time being at least, they are operating under something of a reprieve thanks to the injunctions issued by Federal District Court Judges in  San Francisco and New York City enjoining the enforcement of the President’s order pending final resolution of the respective cases. The Federal Government, however, has appealed the San Francisco case to the Supreme Court, asking for both a rarely granted direct appeal of the case from District Court to the Supreme Court and for the injunction to be lifted. So far, the Court has not acted on either of those requests, but it could do so at any time, potentially meaning that the March 5th deadline would be back in place and Congress would have a limited time to act when it returns from recess next Monday.

All of this suggests that there really ought to be a political incentive for Republicans in both the House and the Senate to solve the DACA problem, especially given the fact that the midterm elections are shaping up to be particularly difficult for the Republican Party to begin with. While the numbers have turned a little more favorable for Republicans over the course of the past month, Democrats continue to lead Republicans in the Generic Congressional Ballot whether you look at the averages measured by RealClearPolitics, Pollster, or FiveThirtyEight. Additionally, President Trump’s job approval numbers remain at historically low levels for a first-term President whether those numbers are measured by RealClearPolitics, Pollster, or FiveThirtyEight. Perhaps more importantly, the Republican Party is finding itself out of step with public opinion on a number of issues that seem likely to be factors during the upcoming campaign, including not only the DACA debate but also issues such as gun control and the economy. Factor into this the fact that the President’s party tends to lose ground in Congress in midterm elections, and the importance of getting at least some of those issues out of the way before the election would seem to be obvious.

Despite these numbers, the prospects that Congress will actually take action in time to help the DACA beneficiaries seem to be fairly low at this point. Congress is in recess this week, but the fact that the Senate rejected all four of the reform proposals in front of it before leaving town, including the proposal put forward by the so-called “Common Sense Coalition,” a bipartisan group of Senators who took it upon themselves to come up with a DACA solution after January’s government shutdown. Even if that or one of the other proposals had passed the Senate, though, it’s not at all clear that anything can pass the House of Representatives. Over in that body, there seems to be a large enough group of hardline immigration restrictionists who would oppose any DACA fix that included the prospect of a path to citizenship even over a longer period of time than Permanent Resident Aliens are required to wait to block reform from passing. Additionally, it’s unclear how House Democrats would react to any bill that contains any part of the package that the hardliners are supporting such as an end to the visa lottery and so-called “chain migration” to the point that legal immigration could be cut by more than half over the course of a decade. Finally, President Trump has threatened to veto any DACA bill that doesn’t include all of the elements that were part of the proposal put forward by the White House. As a result, it’s not clear what, if anything, could pass the Senate, what, if anything, could pass the House, and whether the President would actually follow through with his veto threat. Perhaps the prospect of getting the lion’s share of the political blame if they fail to act will cause Republicans in Congress to come together and get a bill passed. So far, though, it’s not looking good and March 5th is getting closer and closer by the day.

With Congress On Recess, The Fate Of DACA Looks Grim