Last month, James noted the amusing case of a cringe worthy typo in a traffic sign outside a public school in North Carolina. Well, the person responsible for that mistake can rest easy, because, someone in Indiana has done far, far worse: 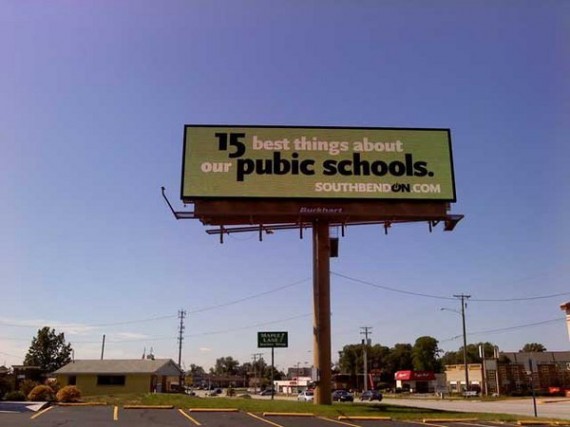 If you ever wondered how much difference just one letter can make when it comes to a message, ask the thousands of people who drove by a digital billboard near the intersection of Ironwood and State Road 23 between Thursday and Monday morning.

The ad urged people to go to the “southbendon.com” website for a look at the “15 best things about our pubic schools.” That’s right, the billboard said “pubic” instead of “public” schools. The letter “L” had been left out of the word public.

Lee MacMillan of South Bend said his wife spotted the error on Saturday while sitting in traffic.

“She got home and said, ‘I can’t believe it said what I think it said,'” MacMillan recalls.

“So we were out driving around yesterday and sure enough, it had that typo in it. So we took a picture and the rest is history, as they say,” MacMillan adds.

. He also emailed it to his neighbor, South Bend School Superintendent Jim Kapsa.

Responsibility for the spelling error has been claimed by the Blue Waters Group. The company does work for the city of South Bend’s redevelopment commission to promote the city.

“I feel terrible. It’s a mistake we made and we’re guilty of it, and responsible for it. and we take full responsibility for the error,” said Patrick Strickler, president of the Blue Waters Group.

Seriously, does nobody do proofreading anymore ?