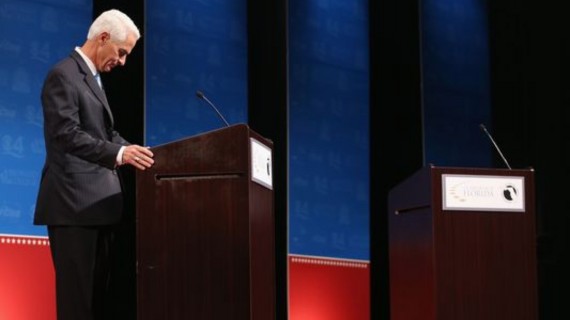 In one of the weirdest, and most Floridian moments in debate history, Wednesday night’s gubernatorial debate was delayed because Republican Governor Rick Scott refused to take the stage with Democratic challenger Charlie Crist and his small electric fan. The Washington Post notes that Crist, who served as the state’s Republican governor from 2007 to 2011 before switching parties, has a well-known penchant for carrying a fan at all times, but Scott claimed the device hidden under his podium violated the debate’s “no electronics rule.”

Rather than waiting for the governor to emerge, the debate started with just Crist onstage. “We have been told that Governor Scott will not be participating in this debate,” said the moderator. The crowd booed as he explained the fan situation, and the camera cut to a shot of the offending cooling device.

“That’s the ultimate pleading the fifth I have ever heard in my life,” quipped Crist, annoying the moderators, who seemed intent on debating fan rules and regulations. After a few more awkward minutes, Scott emerged, and the debate proceeded, with only one more electronics dispute. When asked why he brought the fan, Christ answered, “Why not? Is there anything wrong with being comfortable? I don’t think there is.”

Then the Scott campaign decided they actually don’t care about something as petty as a fan, despite all evidence to the contrary. “Charlie Crist can bring his fan, microwave, and toaster to debates – none of that will cover up how sad his record as governor was compared to the success of Rick Scott,” Scott campaign manager Melissa Sellers said in a statement. “Crist should buy a fan for the 832,000 Floridians who lost their jobs while he was governor.”

While this was going on the Crist campaign sent out a tweet that seemed to confirm that there was an exception for the use of a small fan under the podium, and option that seems understandable given the heat of the studio lights and such. In the end, though, this whole things seems profoundly silly and, in the end, strikes me as something of a dumb move for Scott. Leaving aside the substance of the debate, which didn’t seem to go much better for the Governor,  this pre-debate episode makes Scott look silly and petty, as the reaction of the audience made clear. Additionally, the reports of the debate in Florida’s major newspapers — The Miami Herald, Orlando Sentinel, Tampa Bay Times, and Florida Sun Times — all begin with coverage of what the Herald is calling “Fangate.” That’s what most Floridians are going to remember from last night, and to the extent it makes Scott look silly, that’s not going to help him one bit. That’s just stupid politics right there.