A long-standing staple of American culture will soon be no more. 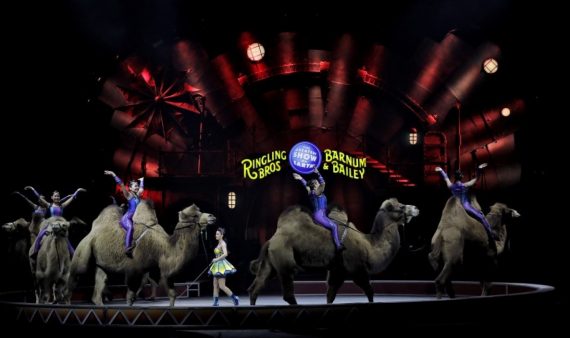 The most well-known traveling circus is shutting down this year after 146 years in operation:

Ringling Bros. and Barnum & Bailey circus announced on Saturday night that after 146 years of performances, it was folding its big tent forever.

In a statement on the company’s website, Kenneth Feld, the chief executive of Feld Entertainment, the producer of Ringling, said the circus would hold its final performances in May. He cited declining ticket sales, which dropped even more drastically after elephants were phased out from the shows last year.

“This, coupled with high operating costs, made the circus an unsustainable business for the company,” the statement said. “The circus and its people have continually been a source of inspiration and joy to my family and me.”

Stephen Payne, a spokesman for Feld Entertainment, said in an interview on Saturday night that the closing would affect about 400 cast and crew members.

“We looked at the performance in 2016 and advance tickets sales in 2017, and we decided it was not a viable business model,” he said.

The company informed employees Saturday night after shows in Orlando, Fla., and Miami.

“There isn’t any one thing,” Mr. Feld told The Associated Press. “This has been a very difficult decision for me and for the entire family.”

Ringling has two touring circuses this season and will perform 30 shows between now and May. Major stops include Atlanta, Boston, Philadelphia and Washington. The final shows will be on May 7 in Providence, R.I., and on May 21 at the Nassau Veterans Memorial Coliseum in Uniondale, N.Y.

The final appearance of the circus in New York City will be from Feb. 23 to March 23 at the Barclays Center in Brooklyn.

An estimated 10 million people go to a Ringling circus each year.

Mr. Feld told The A.P. that transporting the show by rail and other circus quirks — such as providing a traveling school for performers’ children — are throwbacks to another era. “It’s a different model that we can’t see how it works in today’s world to justify and maintain an affordable ticket price.”

The Feld family bought Ringling in 1967.

As the The Washington Post notes, Ringling Brothers and other circus have been the focus of various animal rights groups for some time now due to alleged harsh treatment of the animals featured in the shows, especially the elephants, and those groups are generally pleased with this development:

People for the Ethical Treatment of Animals, a longtime opponent of the circus, wasted no time in claiming victory.

“After 36 years of PETA protests, which have awoken the world to the plight of animals in captivity, PETA heralds the end of what has been the saddest show on earth for wild animals, and asks all other animal circuses to follow suit, as this is a sign of changing times,” Ingrid Newkirk, president of People for the Ethical Treatment of Animals, wrote in a statement.

Wayne Pacelle, president and CEO of The Humane Society of the United States, acknowledged the move was “bittersweet” for the Felds but said: “I applaud their decision to move away from an institution grounded on inherently inhumane wild animal acts.”

In May of 2016, after a long and costly legal battle, the company removed the elephants from the shows and sent the animals to live on a conservation farm in Central Florida. The animals had been the symbol of the circus since Barnum brought an Asian elephant named Jumbo to America in 1882. In 2014, Feld Entertainment won $25.2 million in settlements from groups including the Humane Society of the United States, ending a 14-year fight over allegations that circus employees mistreated elephants.

By the time the elephants were removed, public opinion had shifted somewhat. Los Angeles prohibited the use of bull-hooks by elephant trainers and handlers, as did Oakland, California. The city of Asheville, North Carolina nixed wild or exotic animals from performing in the municipally owned, 7,600-seat U.S. Cellular Center.

Attendance has been dropping for 10 years, said Juliette Feld, but when the elephants left, there was a “dramatic drop” in ticket sales. Paradoxically, while many said they didn’t want big animals to perform in circuses, many others refused to attend a circus without them.

“We know now that one of the major reasons people came to Ringling Bros. was getting to see elephants,” she said. “We stand by that decision. We know it was the right decision. This was what audiences wanted to see and it definitely played a major role.”

Some 500 people perform and work on both touring shows. A handful will be placed in positions with the company’s other, profitable shows — it owns Monster Jam, Disney on Ice and Marvel Live, among other things — but most will be out of a job. Juliette Feld said the company will help employees with job placement and resumes. In some cases where a circus employee lives on the tour rail car (the circus travels by train), the company will also help with housing relocation.

Kenneth Feld became visibly emotional while discussing the decision with a reporter. He said over the next four months, fans will be able to say goodbye at the remaining shows.

A bigger factor than the animal rights group in the decision to bring an end to a business that lasted a nearly a century and a half seems to be something that other forms of entertainment have had to factor into their business models in recent years, namely the fact that thanks to the Internet and other sources the forms of entertainment vying for the attention of the American public has vastly expanded from what it used to be in the past. From movies and television, which now includes broadcast, cable, and streaming media in various forms, to the Internet itself as well as various forms of sports and other after-school and weekend activities for children, there is far more for the average American to see and do than there used to be in the past. For that reason, it’s no longer a big deal when the circus, whether its Ringling Brothers or any of the other smaller touring circuses that make their way around the country, comes to town. Factor into that increased costs associated with live entertainment such as circuses and you have a plethora of reasons why business has likely slowed down. Add into that the fact that the costs of operating a circus that travels the country by train essentially year-round has likely become more and more expensive to operate as the years have gone on.

I’d like to say that I have fond memories of the Ringling Brothers circus, but I really don’t. As far as I can remember, I don’t think I ever went to see it when it was in town in New York City every year and I have no memory of ever going to the traveling circus that would come through my hometown every summer. It’s not like I didn’t grow up in a family that did such things, because we often went to New York to see things such as Disney On Ice and other events like that and I’ve been to plenty of zoos, including the Bronx Zoo in New York as well as zoos in San Diego and Los Angeles and Sea World in Florida. When I got older we would go into the city to see a number of Broadway musicals that were popular in the 70s and 80s. For some reason though, we never went to the circus even though I knew exactly what it was as a kid and, of course, who P.T. Barnum was. (Indeed, I remember going to see the musical based on Barnum’s life when it was on Broadway.) So I can’t say that this is hitting me personally in any sense. Nonetheless, there is no small degree of significance in the fact that an institution that goes back nearly to the final years of the Civil War will be gone in a matter of months.