WaPo fact-checker Glenn Kessler looks into “Robert Moses and the saga of the racist parkway bridges,” the basis for a controversial anecdote shared by Transportation Secretary Pete Buttigieg, and finds it wanting.

[W]e heard from Peter Shulman, an associate professor of history at Case Western University. He said that this story has been largely debunked. So we decided to look deeper. (Note: there is little dispute over the first part of Buttigieg’s comment regarding the building of highways, which is well-documented across the country.)

“Shapiro” was Sidney M. Shapiro, a close Moses associate and former chief engineer and general manager of the Long Island State Park Commission. He was a major source for Caro. The source notes say that Shapiro granted 100 hours of interviews with Caro, with the understanding that nothing could be used unless he died — and he passed away in 1972, two years before publication.

In the endnotes, Shapiro is listed as the only source for the order to keep the bridges of the parkways low. Shapiro, along with Paul Kern, a law secretary at City Hall under Mayor Fiorella LaGuardia, are listed as sources for Moses believing Black Americans were “dirty.” Kern and Paul Windels, LaGuardia’s corporation counsel, are the sources for the details on the bus permits and pool temperature.

Bernward Joerges, a German professor of sociology, in 1999 carefully examined the saga of the bridges. In an essay, he acknowledged Moses was an “undemocratic scoundrel” and a “structural racist” but argues that all parkways at the time had low bridges.

“How, then, should one understand that Moses built some 200 overpasses so low?” he asked. “U.S. civil engineers with whom I have corresponded regularly produce two simple explanations for the rationality of the low-hanging bridges: that commercial traffic was excluded from the parkways anyway; and that the generally good transport situation on Long Island forbade the very considerable cost of raising the bridges … Moses did nothing different on Long Island from any parks commissioner in the country. … In sum: Moses could hardly have let buses on his parkways, even if he had wanted differently.”

He also believes Caro overstated the reasons Black Americans did not go to Jones Beach.

“The fact remains that Blacks could gain physical access to Long Island beaches via many routes. And yet Jones Beach remained a white strand,” he observed. “Even today, when many more Blacks drive cars, and when no politician tries to exclude them from the beaches, not many poor Blacks seem to gather on Jones Beach. There existed then, and there exist today, many reasons for Black families to go elsewhere.”

Kenneth T. Jackson, a Columbia University historian who has said that generations of his students have failed to confirm episodes in Caro’s book, also says the overpass story is not true.

“Caro is wrong,” he wrote in an email. “Arnold Vollmer, the landscape architect who was in charge of design for the bridges, said the height was due to cost.” He added: “Also, you can still get to Jones Beach by train and bus, as you always could.

There is, however, at least one dissenter.

But more recently, Thomas J. Campanella, a Cornell University historian of city planning, had a change of heart when he measured the height of the bridges on the Southern State Parkway. “I’ve always had doubts about the veracity of the Jim Crow bridge story. There is little question that Moses held patently bigoted views,” he wrote in an article for Bloomberg News in 2017. But then he recorded clearances for 20 bridges, viaducts and overpasses on other parkways built at the time and compared them to measures of the 20 original bridges and overpasses on the Southern State Parkway. It turned out clearances are substantially lower on the Moses parkway.

“The verdict? It appears that Sid Shapiro was right,” he wrote.

“I do believe it is true,” Campanella said in an email to The Fact Checker. “The parkways I looked at were built in roughly the same era as the Southern State — especially Sawmill and Hutch. In fact, the Westchester parkways set most of the standards for parkway design for years in the United States. The lower overpasses on the Southern State parkway are a substantial deviation from precedent.”

Joerges suggested there was a reason for this. “True the bridges were low, but each had to be low differently,” he wrote. “Moses took great care that each and every bridge was individually fitted into its natural context: standardized unicity, as it were, was part of an artfully laid out nature. One can show more generally that, when it came to parkway building, bridge-building culture was connected to a specific politics of nature.”

Shulman, the professor who brought this debate to our attention, said Campanella’s measurements do not confirm the story. “I don’t know what average bus heights were in the 1920s, but today they appear to be about 118″ (9- 10″), so I’m not sure how meaningful these different heights even would be in practice,” he said in an email. “Vehicles have to have a clearance of less than 7- 10″ to travel on NY parkways at all. The Saw Mill, the one with the greatest height cited by Campanella, is over 10- (123.2″), but the safe clearance is obviously lower, and surely lower than 118″.”

Obviously this cannot be easily resolved. Caro quotes one of Moses’s top aides as saying the height of the bridges was done for racist reasons, but increasingly that story has been questioned as not credible. Buttigieg should tailor his remarks to reflect what is historically unimpeachable — and we should be more careful to double-check on the latest views of historians. Even a Pulitzer Prize-winning book is not always the last word on a subject.

First, Buttigieg did nothing wrong here. He relied on a powerful anecdote from what’s considered one of the greatest biographies ever written to illustrate his point. Going forward, he should obviously choose a different example.

Second, whether this anecdote is true is relevant only to our understanding of Moses, not the larger point Buttigieg was seeking to illustrate. As Joerges suggests, worse outcomes for Black Americans are often overdetermined. Aside from the direct legacy of slavery, we had generations of racist politicians and other decisionmakers seeking to keep them separate and low. And, even once that started to change, Blacks were less represented at the table and this was exacerbated by a tendency to be poorer, less educated, and all manner of other obstacles. 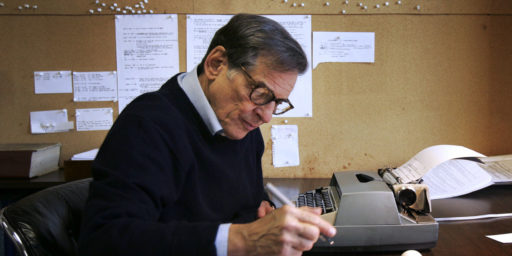