Romney On CNN: `I’m Not Concerned About The Very Poor’

Mitt Romney stumbled a bit during his victory tour this morning. 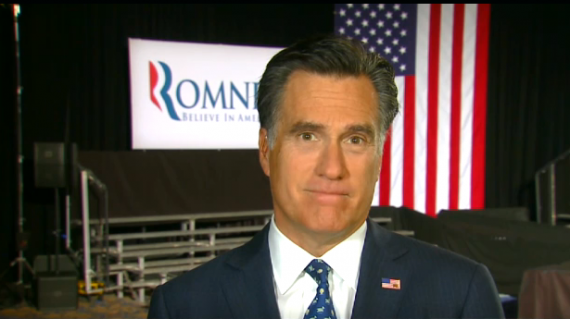 As he was making the rounds of the morning talk shows, Mitt Romney made a statement that already has the political punditocracy lighting up:

In an interview with CNN Wednesday morning that should have been a Florida victory lap, former Massachusetts governor Mitt Romney made a fumble that could give rivals an attack ad sound bite.

Asked about his economic plan, Romney said repeatedly that he was not concerned with very poor Americans, but was focused instead on helping the middle class.

Romney explained that he was confident that food stamps, housing vouchers, Medicaid and other assistance would keep the poor afloat — he pledged to fix holes in that safety net “if it needs repair.” He repeated past statements that his main focus is the middle class because those people, in his opinion, have been hardest hit by the recession (President Obama also has focused many of his efforts on the middle class).

But Romney’s awkward phrasing could give fuel to critics who argue that he does not empathize with the poorest Americans.

Host Soledad O’Brien pointed out that the very poor are probably struggling too.

“The challenge right now — we will hear from the Democrat party the plight of the poor,” Romney responded, after repeating that he would fix any holes in the safety net. “And there’s no question it’s not good being poor and we have a safety net to help those that are very poor . . . My focus is on middle income Americans … we have a very ample safety net and we can talk about whether it needs to be strengthened or whether there are holes in it. but we have food stamps, we have Medicaid, we have housing vouchers, we have programs to help the poor.”

Just two weeks ago, Romney appeared to have shifted on the social safety net, saying in South Carolina, “I’m concerned about the poor in this country.” But on Wednesday, he took a different tack.

ROMNEY: You know, just let people get to know you better. The nice thing about what happened here in Florida is I got a chance to go across the state, meet with people. They heard what I am concerned about. They understand how I will be able to make things better. I think people want someone who not just throws an incendiary bomb from time to time but someone who actually knows how it takes to improve their life, get home values rising again, to get jobs again in this country, and to make sure when soldiers come home they have a job waiting for them. And make sure people who are retired don’t have to worry about what’s going to happen at the end of the week. This is a time people are worried. They’re frightened. They want someone who they have confidence in. And I believe I will be able to instill that confidence in the American people. And, by the way, I’m in this race because I care about Americans. I’m not concerned about the very poor. We have a safety net there. If it needs repair, I’ll fix it. I’m not concerned about the very rich, they’re doing just fine. I’m concerned about the very heart of the America, the 90, 95 percent of Americans who right now are struggling and I’ll continue to take that message across the nation.

O’BRIEN: All right. So I know I said last question, but I’ve got to ask you. You just said I’m not concerned about the very poor because they have a safety net. And I think there are lots of very poor Americans who are struggling who would say that sounds odd. Can you explain that?

ROMNEY: Well, you had to finish the sentence, Soledad. I said I’m not concerned about the very poor that have the safety net, but if it has holes in it, I will repair them.

ROMNEY: The – the challenge right now – we will hear from the Democrat Party the plight of the poor, and – and there’s no question, it’s not good being poor and we have a safety net to help those that are very poor. But my campaign is focused on middle income Americans. My campaign – you can choose where to focus. You can focus on the rich. That’s not my focus. You can focus on the very poor. That’s not my focus. My focus is on middle income Americans, retirees living on Social Security, people who cannot find work, folks who have kids that are getting ready to go to college. That – these are the people who’ve been most badly hurt during the Obama years. We have a very ample safety net, and we can talk about whether it needs to be strengthened or whether there are holes in it. But we have food stamps, we have Medicaid, we have housing vouchers, we have programs to help the poor. But the middle income Americans, they’re the folks that are really struggling right now, and they need someone that can help get this economy going for them.

O’BRIEN: All right. Mitt Romney, congratulations to you on your big victory last night. Thanks for talking with us. appreciate it.

Taken in context, I don’t think what Romney said is all that shocking or necessarily something he needs to apologize for. After all, as Jonah Goldberg notes, it’s essentially the same theme that Bill Clinton ran on in 1992, and focusing on the middle class is  time honored tradition in American politics. His essential point, as I take it at least, is that the safety net for the poor is working and the rich can take care of themselves, but nobody has been looking out for the middle class, who have borne the brunt of the recession that, at least as far as the average American is concerned, isn’t necessarily over. I’m not a Romney fan, but this is hardly something I feel compelled to bash him over. Nonetheless, the way that Romney said it is easy to caricature, and it plays into the overall theme of Romney’s wealth, this tax rate, and all those other issues that are sure to come up during the campaign. At the same time, I’ll admit that the whole theme could be a problem for Romney:

Out of context, the “I’m not concerned about the very poor” line feeds directly into Democrat efforts to portray Romney as an uncaring tool of the wealthy elite. You will see it in campaign commercials before the general election is over.

In context, Romney’s reasoning feeds directly into the left’s Occupy Wall Street narrative. Instead of saying that Romney cares about all Americans, Romney is essentially saying he only cares about 90 percent of Americans. The rich are doing fine and the poor are hopeless. He’ll only give his attention to those in the middle. This is just as divisive as the left’s “We are the 99%” rhetoric.

Of course, the context doesn’t really matter. As Ed Morrissey notes, the truncated version of Romney quote is what will be inserted into campaign commercials and SuperPAC ads, played endlessly by MSNBC hosts like Ed Schultz and Rachel Maddow, and lampooned on The Daily Show. Many will point to it as as classic example of a “Kinsey gaffe,”  which is when a politician gets caught inadvertently telling the truth. That may or may not be true, it really doesn’t matter. For people disinclined to support Romney, it will be more evidence to support their position. For those who are inclined to support him, it will be much ado about nothing. As for the vast American middle, I’ve got to wonder if it will really mean anything, because I’m not sure it really speaks to what will clearly be the central issue of 2012, jobs and the economy.

Jim Geraghty argues that Romney could defend what he said this morning if he wanted to:

He could point out that decades of the welfare state have shown us the limits of government efforts to lift up the “very poor.” He could echo Rick Santorum’s points that the most effective way to end poverty is to ensure the poor work, graduate high school, and get married before they have children. He could point out that the Great Recession has impacted middle-income Americans most severely because they had the most to lose; life under the poverty line in 2006 is not terribly different from under the poverty line in 2012. (How many “very poor” face foreclosure? How many “very poor” have lost their retirement savings? How many “very poor” have seen their small businesses fail?) He could point out that Obama has particularly failed to create opportunities for upward mobility, and that endlessly extending unemployment benefits and expanding the eligibility for food stamps is a band-aid solution at best, and only increases dependency on government assistance. He could point out that the entire philosophy of the welfare state tends to focus government efforts and resources on the poorest, most troubled, and most needing of help, and often neglects the concerns and needs of those who work hard and play by the rules.

But is there any reason to think Romney will say any of this?

Even if he did, would it matter? The sound bite will already be there and it’s hard to respond in the manner Geraghty suggests in a campaign ad. Perhaps if this comes up during a debate or during subsequent interviews, Romney can respond in this manner and he wouldn’t be wrong if he did. However, the gaffe is out there and it will do whatever damage it ends up doing.

This isn’t the most important story of the day, much less a story that is likely to play a major role in the General Election campaign. Nonetheless, it was an unforced error on Romney’s part on a morning he should be reveling in the glow of a well won victory. He’s going to need to learn to avoid those in the future.