The twice-removed Chief Justice is likely getting a promotion. 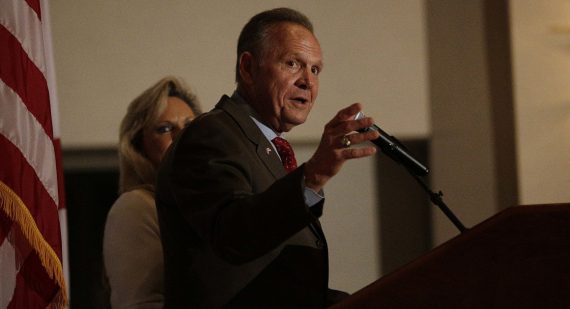 Roy Moore, twice removed as Chief Justice of the Alabama Supreme Court for illegal conduct, is very likely going to be elected to the US Senate. He’ll face the placeholder incumbent, who he easily outpaced in yesterday’s low-turnout primary, in a run-off.

Moore had 40 percent of the vote and Strange — who was backed by Trump and McConnell — had 32 percent after The Associated Press called the race. Rep. Mo Brooks trailed at 20 percent. Alabama election laws call for the top two primary finishers to compete in a runoff if no candidate gets a majority.

[…]”This is a great victory,” Moore told attendees at his election night party. “The attempt by the silk stocking Washington elitists to control the vote of the people of Alabama has failed.”

Moore then pivoted to the runoff, looking to consolidate the two-thirds of the GOP primary vote that went against Strange.

“I extend my hand of friendship to my fellow candidates who did not make this runoff that will be held on September 26. Those candidates ran on honorable and ethical campaign,” Moore said. “… I was honored to campaign with them to make America great again. I now invite them to join with me to defeat the Washington crowd lead by Mitch McConnell who attempted to buy the vote of the people of Alabama with millions of money off a PAC in Washington.”

Moore has relied on a solid base of conservative and religious supporters that grew during two stints on the state Supreme Court, which both ended when he was removed for defying federal orders to take down a statue of the Ten Commandments from government grounds and to issue same-sex marriage licenses. His campaign was optimistic ahead of Tuesday that his committed supporters were most likely to turn out for the Senate primary.

However, Moore has yet to face the full force of the Republican machine backing Strange. Senate Leadership Fund, the super PAC run by McConnell allies, highlighted Trump’s endorsement of Strange in a last-minute ad released Tuesday. But the super PAC’s main focus had been on preventing Brooks, a firebrand member of the House Freedom Caucus and avowed critic of McConnell, from overtaking Strange and making the top-two primary runoff.

Brooks’ congressional district will become a key swing region in the runoff between Moore and Strange, slated for Sept. 26. The outspoken congressman attacked Strange throughout the primary, calling him a stooge of McConnell and even lightly chastising Trump for endorsing him. Brooks also tried to garner attention by releasing TV ads about the shooting that wounded House Majority Whip Steve Scalise (which Scalise’s chief of staff criticized) and defending Sessions during his recent tiff with Trump, but Brooks’ campaign was outspent and out-advertised throughout the campaign.

While a lot can happen in five weeks, the writing seems to be on the wall here. The overwhelming number of Brooks’ support will surely go to Moore. The fact that the “establishment” is behind Strange works very much to Moore’s advantage in the current climate.

The Democrats, meanwhile, have nominated a New South candidate:

Jones, a former U.S. Attorney known for the prosecution of convicted killers Thomas Blanton and Bobby Frank Cherry for the 1963 Sixteenth Street Baptist Church bombing, has picked up several endorsements from Democratic leaders, including Rep. John Lewis of Georgia and Rep. Terri Sewell.

“All my life I have been trying to work with folks to make sure people have equal opportunities–they’re treated fairly, they’re treated the same under the law, they re treated with dignity and respect,” Jones said when he arrived to his watch party after learning he had won.

“You know, 15 years ago, I actually went up against the Klan. And we won,” Jones said.