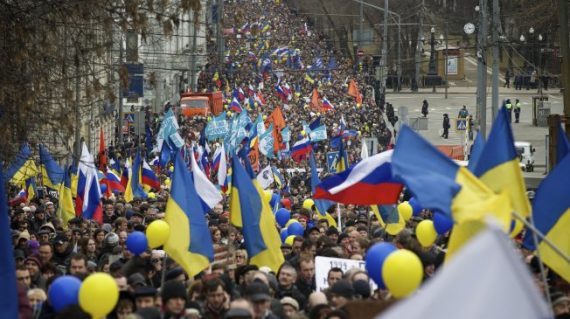 Within hours after a plebiscite that pretty much nobody outside of Russia viewed as legitimate, pro-Russian separatists had declared overwhelming victory for their side:

DONETSK, Ukraine — Residents of two regions of eastern Ukraine turned out in significant numbers Sunday to vote in support of self-rule in a referendum that threatens to deepen divisions in a country already heading perilously toward civil war.

The wording of the referendum was vague, asking whether voters favored self-determination rather than outright independence or joining Russia. That meant some of those voting yes wanted more autonomy but not necessarily to split from Ukraine.

But the vote infuriated the Ukrainian government. The Foreign Ministry called it a “criminal farce” arranged by a “gang of Russian terrorists,” reflecting the government’s view that Russian agents

are behind the breakaway movement. Many residents who oppose the separatist movement boycotted the vote.

Both the European Union and the Obama administration said they would not recognize the results of the balloting in the Donetsk and Luhansk regions, which they called illegal.

Late Sunday night, Roman Lyagin, head of the separatist election commission in Donetsk, said that nearly three-quarters of the 3.32 million eligible voters in the region had cast ballots, a figure that was not possible to confirm independently. Just over 89 percent of voters approved the measure, he said. Figures for Luhansk were not immediately available.

The vote will complicate Ukraine’s efforts to reestablish order in the wake of a revolt that ousted the country’s pro-Russian president in February and prompted a backlash in the east. Ukraine has scheduled nationalelections for May 25. But given Sunday’s result, Lyagin said, “it is not logical to have the presidential election here on the territory of the Donetsk People’s Republic.” The U.S. and European governments have threatened Russia with further sanctions if the national vote is disrupted.

Separatist leaders have in the past come out clearly in favor of independence or of union with Russia, and they have suggested that another referendum to decide that question could take place at a later date. Lyagin said there was no plan for a quick second referendum, but he did not deny that one might eventually occur.

Russia is almost certain to embrace the vote as legitimate. In a pre-recorded speech that blared over loudspeakers in a rebel military camp in Luhansk, Russian nationalist politician Vladimir Zhirinovsky congratulated people for their “absolute victory.”

“We’ll live a peaceful life in Russia together, and Kiev will always lose,” Zhirinovsky said. Russia has massed roughly 40,000 troops on its border with Ukraine and has threatened to intervene if the rights of ethnic Russians are violated.

Many observers say the referendum lacks any credibility. Names were checked against a 2012 voters’ list, but anyone who turned up with a passport was allowed to vote, even if they weren’t on the list. Indeed, in one polling station in the city of Mariupol, many people brought multiple passports on behalf of relatives and openly filled out two, three or even four ballot slips themselves.

The ballots lacked markings that could prevent them from being widely copied. The people staffing the polling stations and counting the ballots were activists who supported a yes vote. There were no international oversight missions.

Nonetheless, many people here — at least those who voted — will see it as a powerful expression of popular will.

Where this goes from here is unclear. As noted, the plebiscite was vague about what the ultimately goal of this expression of sovereignty actually was, so it could range from anything to increased autonomy within Ukraine to a move that would eventually lead to a bid for union with Russia, which of course would tear the entire nation of Ukraine in two. Needless to say, we’re likely to see more provocations from the pro-Russian forces in the east as the date for the national election nears, if not an outright attempt to disrupt that election. So far, at least, the Russians seem to be playing it safe in most respects but that’s likely not to be the case in the long term.