With Elena Kagan now confirmed, it may be a few years before we have another Supreme Court confirmation fight:

WASHINGTON — After a period of dramatic change at the Supreme Court and in her personal life, Justice Ruth Bader Ginsburg is looking forward to being one of three women on the high court for the foreseeable future.

Although some have speculated she might step down next year, the 77-year-old Ginsburg told The Associated Press on Tuesday she has no plans to retire anytime soon and still wants to match Justice Louis Brandeis, who stepped down at age 82

There’s been some speculation that Ginsburg, who was treated for cancer several years ago, may step aside soon herself, but this appears to end those rumors. Additionally, there doesn’t seem to be anyone else on the Court who would be inclined to step aside anytime in the next two or three years. So, absent something unfortunate, we may not have an SCOTUS nominations to talk about for awhile. 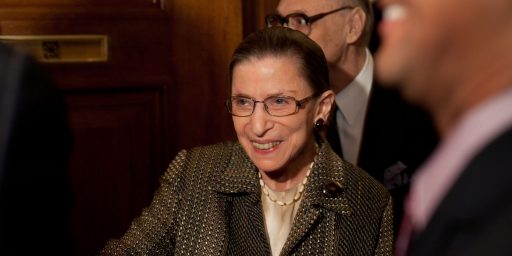