Reports today indicate that San Antonio Mayor Julian Castro, the brother of Congressman Joaquin Castro and someone considered a rising star in Texas politics, will be the new Secretary of Housing and Urban Development:

San Antonio Mayor Julian Castro, a rising star in Democratic national politics who’s even been mentioned as a possible vice presidential contender in 2016, is poised to accept an offer to serve in President Barack Obama’s cabinet, his hometown newspaper reported Saturday.

Castro “has signaled his willingness to begin a swift process of confirmation to the post,” including a vetting by the FBI that has already begun, San Antonio Express-News columnist Brian Chasnoff writes, citing knowledgeable sources.

The New York Times later Saturday reported Castro would be offered the position of secretary of housing and urban development, and that current HUD secretary Shaun Donovan would replace Sylvia Mathews Burwell as head of the Office of Management and Budget, citing Democrats informed of the plans. A White House official said they had “no personnel announcements at this time.”

The Express-News reported that this is the second time in as many years that Castro, who was elected mayor five years ago, has been approached by the White House about a cabinet job. He declined a chance to become transportation secretary, but privately “he’s said an offer from the president to serve as education secretary would have proven tougher to turn down,” Chasnoff writes.

Castro was chosen by Obama to give the keynote speech at the 2012 Democratic National Convention. He and his brother, Rep. Joaquin Castro, have garnered widespread attention as two up-and-comers in the Democratic Party.

On some level, I suppose moving to HUD would be a step up for Castro from Mayor of San Antonia, especially given that there has been some, premature in my opinion, speculation, about him becoming Hillary Clinton’s Vice Presidential running mate in 2016. At the same time, though, the Department of Housing and Urban Development isn’t exactly a high profile cabinet position and would be even less so during the final two years of a lame duck Administration. Other than adding a line to Castro’s resume that won’t matter much when it comes to actual substance, I’m not sure how this advances his political career.

Nonetheless, if Castro does take the job be prepared for the Washington political media to spend the next two years using him and his brother to make a lot of dumb jokes about twins. 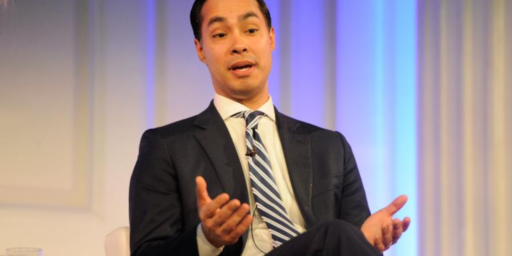