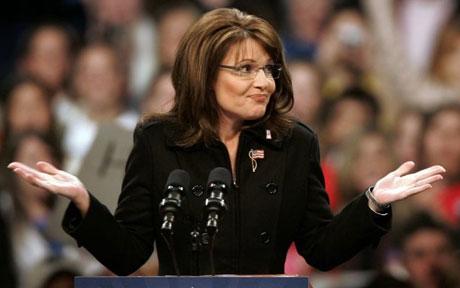 If true, this is just weird:

So we’ve been reading this leaked Palin book. Interesting read! But this manuscript doesn’t seem quite ready to be published, despite it being leaked around to the entire Internet. Frank Bailey and his co-authors excerpt a bunch of Sarah Palin’s e-mails, and one page of these excerpts shows Palin’s personal Gmail address. We searched for this address on Facebook, the way millions of people search for people on Facebook every day, and it appears that Palin keeps a second Facebook account. Besides staying in touch with Sarah Palin’s father Chuck Heath, what does “Lou Sarah” use Facebook for? Saying “amen” to her own Facebook fan page missives, in the guise of a completely different person. “Lou Sarah” also really “LIkes” Bristol Palin’s Dancing With the Stars photos.

“Lou Sarah” is also friends with some of Sarah Palin’s political appointees. Still, “Lou” has only 12 total friends on Facebook.

“Lou” is a fan of Sarah Palin, Bristol Palin, Mark Ballas (Bristol Palin’s gorilla-costumed dancing partner on Dancing With the Stars), and the Wasilla-based Edge Fitness.