Eric Robinson, a Yale IR grad student and veteran of both the Iraq and Afghanistan wars, doesn’t give a hoot about what Sarah Palin had written on her hand at her Tea Party Convention speech. He is, however, concerned about what was on her wrist. I hadn’t noticed it until I watched MSNBC’s “Hardball” on Tuesday, but it is a memorial bracelet; something familiar to veterans who have lost friends and family in the wars in Iraq and Afghanistan. I wear one commemorating a friend of mine who died in Baghdad in October of 2006, and I know many other veterans — and some still in the armed forces — who wear these bracelets as a reminder of the sacrifices their friends made on behalf of the units in which they served and the country they swore to protect.

There are many ways to commemorate soldiers; the reminders are everywhere. Yellow ribbons (or their magnetic counterparts) adorn cars and, occasionally, homes. Lapel pins and service flags — blue stars on a white background framed by a red border — grace the coats and homes of those with family members deployed at a war zone. As you might recall, Sarah Palin and Vice President Joe Biden both wore pins during the 2008 campaign. My parents displayed a double blue star during the holidays of 2008 when I was serving in Afghanistan and my brother was an Army officer in Iraq.

And for some soldiers, there is the gold star. It remains on the same white field and the flag has the same outline, but a gold star represents a family member killed in action — the most significant sacrifice one can make on behalf of their country.

This brings me back to my issue with Palin. The name on her black memorial bracelet — one, like the gold star, a demonstration of a friend or associate who was killed in action — is that of her oldest son, Track. Track served honorably in Iraq, and both he and his parents should be thanked for his selfless service to his country. He is also alive.

Commemorating Track’s service by wearing a a black memorial bracelet which is reserved for those dead or even a red bracelet for those missing in action, demonstrates a horrifying contempt for those who gave their last full measure of devotion or an almost unbelievable ignorance of the importance of symbols in American history.

Unfortunately, given Palin’s reputation and frequent public statements, I assume it is the latter.

Sarah Palin, please take off the bracelet. Be thankful you have no reason to wear it.

Aside from being slightly amused that my prediction that “We’re quickly running out of family-friendly parts of Sarah Palin’s body” is speedily nearing fruition, it’s an interesting controversy.

I’m a Desert Storm veteran and the son of a Vietnam veteran and, while I was aware of the traditions surrounding the yellow ribbons (Thank you, Tony Orlando!) and  gold and blue stars, was heretofore only vaguely aware of the black wristband — and then only because there was a minor kerfuffle when then-candidates Obama and McCain were both wearing them during the 2008 campaign.

As to Palin, it’s unclear what she was attempting to symbolize.   Certainly, she’s not trying to pretend that Track was killed in a war.   If nothing else, Andrew Sullivan would quickly launch an investigation.   So, maybe she was unaware of this (new?) tradition.   Or she mistook it for some other kind of black wristband that would have been appropriate for the occasion.   Doctor Google tells me there is a black “Hope, Courage, Faith” wristband being marketed, but it’s of the LiveStrong rubber variety.   There’s also various Christian-themed black wristbands to honor serving soldiers, but they are woven and look nothing like the one Palin is sporting.

Readers are invited to proffer their own guesses.

UPDATE:  In case the foregoing isn’t clear on this point, it doesn’t appear that Palin did anything untoward here.  Unlike some of the sillier anti-Palin memes (Sarah Palin’s legs and Sarah Palin’s toenails, etc.) this one does potentially touch a nerve as veterans can be exceedingly sensitive on the matter of honors.  We’ve seen this most recently with the exactment of, presumably unconstitutional, “stolen valor” laws, which criminally punish people who claiming military medals and the like to which they’re not entitled.

UPDATE II:  Several commenters link to various private sites selling black or blackish wristbands that honor living people for their service.  That’s not really meaningful.  Of course someone sold it, unless we’re to think Palin hand-crafted it herself.  That doesn’t address the protocol issue, if one exists.

One of those commenters links to another photo of Palin wearing what appears to be the same wristband in a different light and pronounces it “goldtone” rather than black.  That would seem relevant.

UPDATE III:  The verdict is in:  Palin is wearing something called a “Hero Bracelet,” marketed by a commercial vendor and apparently she and Joe Biden were given one gratis.  There is no tradition associated with said bracelets; like the various other “Support the Troops” paraphernalia for sale out there, they’re of recent origin.   Some of these are in black, although Palin’s isn’t — at least in full light. Robinson’s confusion would appear to be genuine — there is another recent convention of black bracelets to honor the fallen and Palin’s bracelet does look black in the photo above (reflecting her black jacket, no doubt) and, presumably, in the video he saw — but these are two different bracelets.   In any case, as noted in the original post, there was clearly no aim on Palin’s part to pretend her son had fallen in combat. 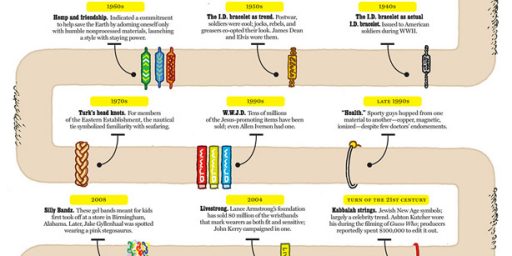