A century later, the shots fired in Sarajevo 100 years ago still echo. 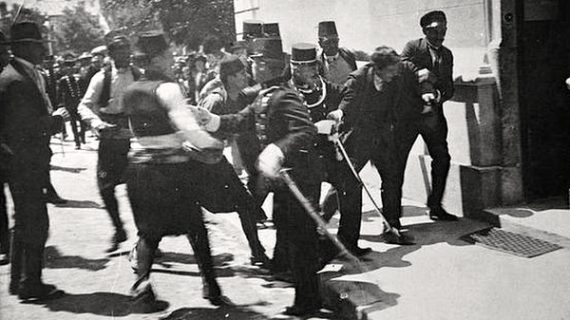 Tomorrow will mark the 100th anniversary of the day that a Bosnian Serb named Gavrilo Princip assassinated Archduke Franz Ferdinand, the heir to the throne of the Austro-Hungarian Empire, during a visit by the Archduke to Sarajevo. Over the ensuing four weeks, political machinations and the bizarre alliances that had kept the peace in Europe, for the most part, since the Napoleonic Wars ended push all of the major powers of Europe toward a war that nobody really seemed to want to fight. That war started one month after the assassination and lasted for the next four years, although its consequences continue to reverberate today. There will obviously be much reflected over the next four years about the events of the “Great War” and how it shaped the world, and it appears Bosnia’s Serbian community has decided to kick things off by erecting a statue to Princip:

Marking the centennial of the beginning of World War I in their own way, Bosnian Serbs have unveiled a monument in their part of Sarajevo to the man who ignited the war by assassinating the Austro-Hungarian crown prince on June 28, 1914.

At the other end of the city, the Vienna Philharmonic orchestra was rehearsing Friday for Saturday’s grand EU-sponsored performance planned as a symbolic start to a new century of peace at the place where the century of wars started 100 years ago.

The two evidence testify to the depth of lingering divisions, with one side promoting peace to the tunes of Joseph Haydn’s “God save the Emperor” while the other erects a monument to the assassin of the emperor’s heir.

Gavrilo Princip is a handsome man, walking through the marble cafe of his motel in a Serb-suburb of Sarajevo. He has the same high cheek-bones, the same piercing gaze as his great-uncle, Gavrilo Princip, who, aged 19, fired the shot in Sarajevo on June 28th, 1914 that killed Archduke Franz Ferdinand, heir to the Austro-Hungarian throne.

The archduke’s death catapulted the Great Powers into the First World War, a four-year long conflict that left 16 million dead and caused the downfall of four empires: the Russian, the Austrian, the Ottoman Turkish, and the German. This month sees the 100th anniversary of Princip Sr. shooting dead the Archduke, something that is causing the present day Princip some concern.

t has become fashionable to say the First World War was a waste of life. But for Princip and the peoples of southern, central and eastern Europe, the War removed the empires that had governed them for centuries. In 1908, Austria annexed Bosnia-Herzegovina from the Ottoman Empire – a formalisation of what had been the status quo since the 1878 Congress of Berlin, when Austria took over the governing of Bosnia from Turkey.

Princip became a member of Mlada Bosna (Young Bosnia), a movement of young Slavs – of every ethnic and religious persuasion – dedicated to overthrowing Austro-Hungarian rule. Princip and his fellow Mlada Bosna members were looking for a moment to make a protest and found it when Franz Ferdinand, crown prince of the Habsburg Empire, and his wife Sophie, Duchess of Hohenberg paid an official visit to Sarajevo.

The couple were driven down the embankment along the river Miljacka, the artery of Sarajevo, past cheering crowds. One of Princip’s Mlada Bosna colleagues threw a bomb. It missed, was caught and then thrown back to the bomber by an Austrian general, who was wounded. The imperial couple were saved. The assassin leapt into the river but was captured by police and the archduke’s cortege continued to Sarajevo’s town hall as planned.

In a show of imperial sangfroid, the archduke and his wife decided to take the same route on their return journey, to visit the wounded general in the hospital. Mlada Bosna had a back-up plan. As the imperial car stopped to turn at the Latinski Bridge, Princip stepped out of the crowd and shot the archduke in the throat at a range of two metres. Princip fired the pistol again but missed, hitting Duchess Sophie in the abdomen.

Franz Ferdinand was heard to say: “Sophie, don’t die, for our children.” Within minutes, however, the couple were both dead and Princip, whose cyanide suicide capsule had failed, was captured by the police.

And the rest, as they say, is history. Itching for revenge and the desire to stomp down the restive Bosnian population that Princip was a part of, the Austro-Hungarians pushed for war against Serbia. Since Serbia was an ally of the Russian Empire, that necessarily meant that the Russians were likely to get involved. If the Russians got involved then the Germans would surely follow on the side of their Austro-Hungarians allies. German involvement would drag in the French and the British. And then there was the Ottoman Empire, which was clearly in a deeper state of collapse than the Austro-Hungarians put apparently saw the idea of a wide war in Europe as a way to grab territory and settle old scores, especially against the Russians. There was more to what was going on in Europre in 1914 than an assassination and treaties, of course, the Austro-Hungarians and Ottomans were clearly “Empires” in name only, the Germans were anxious to a larger voice on the world stage and saw the British standing in their way, and the Russians, well, nobody seemed to really know what was going on. Logically, there was no reason for any of these nations to go to war against each other, but logic seldom plays a a role when massive catastrophe occurs so both sides armed for a war that they thought would be over quickly.

As it turned out, of course, there was no quick war. Thanks to modern technology and war fighting methods, both sides settled into trench warfare stalemates punctuated by the particularly bloody battles that, by the time the war ended, had included everything from chemical weapons to airplanes to the first use of tanks. Across the Atlantic, the United States led by Woodrow Wilson proclaimed neutrality in the war but clearly favored the British in the war and ignored German demands to cease sending aid that could be used in the war effort. That, combined with ever increasing German belligerence in the Atlantic against American shipping inexorably pushed the United States toward involving itself that it really had no business being a part of. To a large degree, though, it was the arrival of American troops in 1917 that helped break the long stalemate and create a series of Allied victories that led to the German surrender in 1918. By that point, however, large swaths of Europe had been laid to waste, and some 10 million military deaths on both sides, another 20 million injured, and nearly 10 million additional soldiers on both sides reported as missing.

The consequences of the Great War itself were far reaching, and The New York Times has a great collection of articles covering that which I am sure will be updated. The old order in Europe was gone. The Russian Empire had been toppled by a revolution that would define the latter half of the 20th Century. The German Empire dissolved in defeat and its territories carved up in a manner that would create resentments for the next two decades. The Austro-Hungraian and Ottoman Empires were carved up the the Allied forces. creating new nations in Europe and the Middle East and borders that are causing political problems to this day. The United States tried to retreat back across the Atlantic, but that would prove to be impossible as the new order in Europe created problems for everyone and a new threat developed in the Pacific. And the peace imposed at Versailles would lead to resentments in Germany that brought to power one of the most destructive regimes in world history, and led to the worst war in human history. There arguably would have been a conflict in Europe in the early 20th Century regardless of whether Franz Ferdinand lived or died, and at the very least it seems apparent that the old tired empires in Vienna and Constantinople would have collapsed at some point with or without a war. However, it’s also clear that the world we live in would be significantly different had World War One not unfolded when and how it did. And it all started on a June day in Sarajevo when one Bosnian Serb took a shot a guy wearing a rather ridiculous uniform.  It’s kind of funny how one event can have so much of a effect on the history of the world. 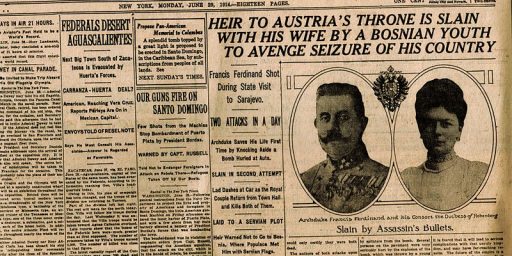 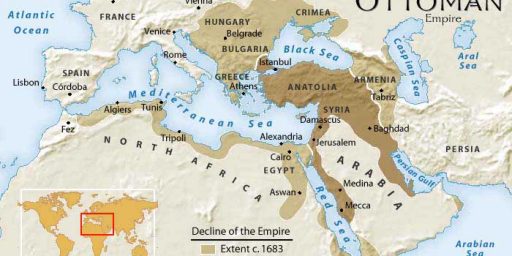 Islam And World War One