The news media of 1914 didn't see World War One coming, but it's not clear that we're any better. 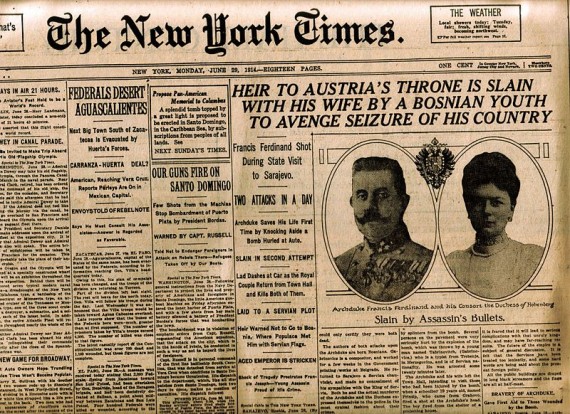 Among the more amusing things about the reminiscing we’re seeing today on the 100th anniversary of the assassination of Archduke Franz Ferdinand in Sarajevo, which sent Europe on a path to a war that continues to reverberate today has been the look that some have taken at how the media reacted to the events in that remote part of a dying Austro-Hungarian Empire. Matthew Yglesias, for example, points out how spectacularly wrong The New York Times got things a century ago:

This was apparently the era before clickbait headlines, because The New York Times’ news analysis told us “Tragedy May Alter Politics of Europe.”

What’s more, in an excellent demonstration of the fact that journalism is really hard and past events were less predictable than they seem in retrospect, the analysis of how the assassination would alter the politics of Europe was completely wrong.

The Times reported that “in Russia, England, and France the Archduke Francis Ferdinand was regarded as one of the most serious dangers to the European peace” while “even in Germany his accession to the throne was viewed with apprehension.” Their view was that Franz Ferdinand was a proponent of an aggressively anti-Serbian foreign policy, and that his removal from the order of succession made a Balkan conflict less likely.

By contrast, the new heir apparent, “while popular in Vienna is described as a young man of no remarkable ability.”

Yglesias does not that news organizations closer to the situation seemed to be a little better at understanding the consequences of what happened, citing in particular several French newspapers mentioned in the original Times piece. However, being closer to the situation didn’t help The Guardian, which published a look back at how the paper had covered the events in Sarajevo and admitted that it had gotten the situation quite wrong:

“It is not to be supposed,” wrote a correspondent for the Manchester Guardian analysing the significance of the assassination 100 years ago on Saturday, “that the death of the Archduke Francis Ferdinand will have any immediate or salient effect on the politics of Europe.”

Thirty-seven days later, Britain declared war on Germany and Europe was plunged into a worldwide conflict in which more than 16 million people died in four years.

But it is hardly surprising that the Guardian did not predict the unimaginable horror to come. The newspaper’s editorial of 29 June 1914, the day after the assassination, dwelt on the archduke’s personality and on the narrow implications it might have for the internal politics of the Austro-Hungarian empire.

“What its motives may have been we do not know, nor do they greatly matter,” it advised its readers. “It is a difficult and at present an ungracious task to speculate on what influence the crime of yesterday may have on Austrian politics.”

The archduke, the editorial noted, was “a great gardener”, adding that “in England, under other conditions of life, he would have been an ideal country squire”. Franz Ferdinand was described as “a simple and amiable man, but very passionate and, in anger, uncalculable”.

The Manchester Guardian, then edited by the legendary CP Scott, was far from alone in playing down the significance of the death of the archduke, shot by the young radical Bosnian Serb, Gavrilo Princip, in Sarajevo. The Sleepwalkers, historian Christopher Clark’s seminal work on how Europe went to war in 1914, reflects the mixture of complacency and rhetoric Europe indulged in.

Sitting here a century later it is, of course, easy to laugh at the editors of the Times or Guardian and wonder how they could have gotten things so spectacularly wrong. One of the reasons, of course, is that they didn’t have the benefit that we do of knowing what would happen. They didn’t know that the assassination of Franz Ferdinand would set in motion a chain of events that led to a devastating four year long war, and a peace that would itself give birth to an even more devastating war. They had no idea that Europe’s leaders would, at nearly every turn, make precisely the wrong choices and just make war more inevitable, and more brutal once it started. They couldn’t fathom that a seemingly random event on a street in Sarajevo would continue to have an impact a century later. There is plenty to criticize about what the leaders in Europe and, eventually, the United States did that led to World War One and its aftermath — unlike World War Two there’s no real argument that it was a “good war,” for example — but I’m not going to sit here a century later and give men who have long been dead a hard time for not seeing the unfolding disaster in the days after June 28, 1914. I’m not sure that anyone could have, and certainly the men who were actually charged with making the decisions that mattered either didn’t see it coming or ignored the warning entirely.

What these reports bring to mind, though, is how little things have actually changed when it comes to major news events and their analysis by the plethora of “experts” that appear on the television or write on the Internet and purport to explain to us “what this all means,” sometimes within mere hours after the “this” in question has happened. A century ago, the news was delivered via telegraph for the most part, and printed by newspapers onto vast rolls of newsprint. Today, information can be delivered instantaneously around the world and posted online within seconds. Cable news reports events in real time, often before we even actually know what has happened. And the talking heads pop up like weeds on those same networks within mere hours of an event, and are asked to interpret what “Breaking News” means before anyone can reasonably be said to have had time to digest it. Thanks to technology, we know more about what is going in our nation and our world  than ever before and, for the most part that is a very good thing. At the same time, though, it’s worth keeping in mind that the technology not only doesn’t make error less likely, it may actually make it more common and more difficult to correct.

Just in the last several years, we’ve seen plenty of examples of how the more rapid availability of news doesn’t necessarily improve the quality of reporting or analysis. When former Congresswoman Gabby Giffords was shot in Phoenix January 2011, an NPR report erroneously stated that she had died and it was several minutes before that information was corrected. Two years ago this very day, CNN got the “Breaking News” of the Supreme Court’s decision on the constitutionality of the Affordable Care Act completely wrong simply because its reporters had failed to read through the opinion in enough detail in the desire to be first with the story. That network also spectacularly botched coverage of the Boston Marathon bombing and the attack at the Washington Navy Yard. On a more mundane level, there’s hardly a week that goes by on social media when a celebrity isn’t either falsely reported as having died, or reported as having died on that day even though the even occurred several years in the past (this typically happens on the anniversary of the person’s death and probably just involves people not bothering to check the year on a story before sharing it. In the pre-Internet era, of course, there was the famous report that White House Press Secretary James Brady had died in March 1980 when President Reagan was shot. Additionally, there were plenty of erroneous reports that came out during the coverage of the September 11th attacks. While it was entirely understandable why this would happen when you’re dealing with the biggest breaking news story since the Kennedy Assassination, those erroneous reports have contributed to many of the myths and outright lies that the “Truther” crowd has been spreading for nearly the last 13 years.

The new media hasn’t been much better when it comes to analysis, either, All one needs to do is watch cable news for even a brief period of time, or one of the Sunday morning shows, to see that demonstrated aptly. For the most part, analysis these days ends up meaning little more people getting on the air to score partisan points, because that’s what the ratings demand. There are exceptions to this general rule, of course, but I honestly can’t say that the analysis we get today is any more informed, insightful, or likely to be accurate than what the Times and Guardian had a century ago.

While we may like to think that our technology makes us better than people were a century ago, in a lot of ways we haven’t changed all that much. This is especially true of the media, and it’s why skepticism is always called for and one should always be open to reconsidering your ideas when circumstances change or new information presents itself. The people of Europe certainly had to do it a century ago. 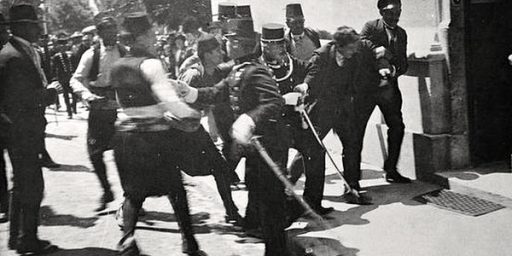