According to initial estimates, the economy grew at faster pace in the second quarter than at the beginning of the year, but it was hardly anything to write home about.

The Commerce Department has released the first estimate of economic growth in the second quarter of 2017, which also happens to be the first full quarter for which Donald Trump has been President, and it reveals modest growth at about the same pace we’ve seen over the past several years:

Real gross domestic product increased at an annual rate of 2.6 percent in the second quarter of 2017 (table 1), according to the “advance” estimate released by the Bureau of Economic Analysis. In the first quarter, real GDP increased 1.2 percent (revised).

The Bureau emphasized that the second-quarter advance estimate released today is based on source data that are incomplete or subject to further revision by the source agency (see “Source Data for the Advance Estimate” on page 3). The “second” estimate for the second quarter, based on more complete data, will be released on August 30, 2017.

The increase in real GDP in the second quarter reflected positive contributions from personal consumption expenditures (PCE), nonresidential fixed investment, exports, and federal government spending that were partly offset by negative contributions from private residential fixed investment, private inventory investment, and state and local government spending. Imports, which are a subtraction in the calculation of GDP, increased (table 2).

While this first estimate does show that economic growth was better than the 1.2% annualized growth we saw in the first three months of the year, it doesn’t represent a significant break from the relatively modest growth rates we’ve seen since the recovery began in mid-2009 shortly after former President Obama took office, as this chart from the Bureau of Economic Affairs shows: 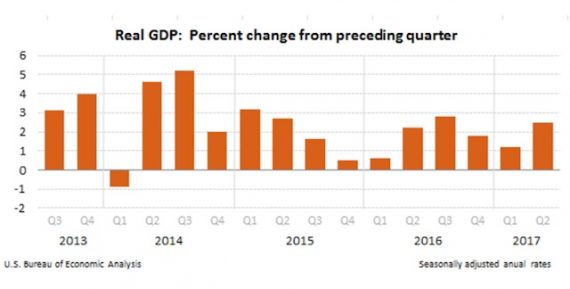 Looking at the details, the numbers aren’t really all that impressive either. One significant area of growth came from Federal Government spending, which increased 2.8%. While this number does benefit the overall economy to some extent, it’s generally not seen as good news when government spending ends up being the primary driver of economic activity since such spending is largely not sustained over a long period of time. In this case, much of the increase in Federal spending is attributable to defense spending. In order to see sustained and healthy economic growth, we need to see growth from all sectors of the economy, and it’s not clear that’s happening just yet. Consumer spending did increase to a 2.8% growth rate from the relatively modest 1.9% we saw in the first three months of the year, but that’s largely attributable to seasonal factors such as warmer weather that encouraged consumers to get out of the house and go shopping. Additionally, it’s worth noting that this is the fourth consecutive quarter that consumer spending has been below the far healthier growth rate of 3% or better. On the good side for business, exports were up 4.1%, which is below the 7.3% we saw in the first quarter but still fairly healthy. On the other hand, imports slowed during the second quarter, with 2.1% growth compared to the 4.3$ growth we saw in the first three months of the year.

The New York Times notes that these numbers are better news than what we saw in the first quarter, but notes that it falls short of the goals that President Trump set during his campaign:

The American economy grew at an annual rate of 2.6 percent last quarter, a big pickup from the beginning of 2017, but well short of the pace President Trump has promised and lower than what many experts had been anticipating until recently.

Still, the Commerce Department’s report issued on Friday is a sign that the economy remains on track, with underlying growth in line with where it has been since the current recovery began eight years ago this summer.

On Wall Street, economists had been expecting growth of 2.5 percent for the second quarter. The new data on gross domestic product come after positive figures this week on orders for durable goods in June and a slightly more favorable trade balance.

One bright spot lately has been the dollar’s decline against other currencies, especially the euro, which makes American exports more competitive overseas.

Diane Swonk, an independent economist in Chicago, noted that the dollar’s weakness benefits American companies with sales abroad, as those foreign revenues are translated into dollars.

She cited impressive earnings reports from McDonald’s and Caterpillar recently, and currency gains should serve as a tailwind for corporate profits later this year.

In the first quarter of this year, the economy expanded at an annual rate of 1.2 percent, a disappointing showing by any measure and one that followed slow seasonal starts over the past several years.

As a result, economists initially expected a strong rebound, with the consensus in May calling for 3.7 percent growth. Those hopes came down to earth, however, amid lackluster spending by consumers, which accounts for roughly two-thirds of all economic activity.

The economy benefited last quarter from healthy consumer spending and exports, while less robust state and local spending, along with slower inventory growth, were a headwind.

“The economy remains in a modest growth path, and last quarter was driven by gains in household and business spending,” said Michael Gapen, chief United States economist at Barclays.

“The surprise came in the area of trade, where it looks like solid growth outside the U.S. and a weaker dollar boosted exports,” Mr. Gapen added. “This is a turnaround from last year, when a stronger dollar was a drag on growth.”

With economists like Mr. Gapen forecasting growth of 2 percent to 2.5 percent in the second half of the year, the economy’s performance during Mr. Trump’s first year in office is likely to end up almost exactly in line with what prevailed under President Barack Obama.

“This is more of the same,” said Pat Newport, an economist at IHS Markit. “We are doing better than just about any other developed Western economy, even though this doesn’t meet the standards we’re used to. We’re the leader of a slow-moving pack.”

The Trump White House has said that it is aiming for economic growth of 4% or better, but that seems unlikely for several reasons. First of all, getting that kind of growth out of an economy as big as the U.S. economy is not as easy as it might appear to be to ideologues and politicians. More often than not, the size of the economy itself means that even relatively healthy growth ends up coming in around the 2.5% to 3% range. The last time we saw growth rates higher than that have been in the initial quarters after a very deep recession, such as in the 1980s after the double-dip recession we went through at the end of the Carter Presidency and beginning of the Reagan Presidency and to some extent in the early stages of the recovery from the recession. Additionally, in those cases a large segment of the spectacular growth that we saw was likely due to the fact that Federal Reserve policy at that time was pumping large amounts of money into the economy via lower interest rates and, in the case of the 1990s, a tech boom that was fueling what has become massive change in the nature of the economy that we’re still dealing with to this day.

It also needs to be stated that the President doesn’t really deserve credit, or blame, for what’s going on in the economy notwithstanding the fact that he was President for the entirety of the second quarter. With the exception of a few minor changes to regulations, the Trump Administration has done nothing that would be likely to have a serious impact on economic growth in the short term. Instead, what we’re seeing, and what we’re likely to see for some time to come, is an economy that chugs along at its own pace largely independent of who happens to be in the White House. Nonetheless, it’s no doubt the case that the White House will seek to somehow claim credit for these numbers and that many of Trump’s supporters will mindless repeat such claims. The truth is that he had nothing to do with it all, and that the White House better be careful about what it takes credit for, because it could and will just as easily get blamed if and when growth rates dip down again.