The economy grew in the final quarter of 2017, but at a slower pace than earlier in the year and far slower than what the President has promised.

The first estimate of economic growth in the final quarter of 2017 showed the economy growing at a slighter slower pace than it had during the rest of the year, putting into question just how close we’ll get to the robust economic growth that President Trump and Republicans promised during the 2016 campaign, and which they are depending upon for their tax plan to work:

Real gross domestic product (GDP) increased at an annual rate of 2.6 percent in the fourth quarter of 2017 (table 1), according to the “advance” estimate released by the Bureau of Economic Analysis. In the third quarter, real GDP increased 3.2 percent.

The Bureau emphasized that the fourth-quarter advance estimate released today is based on source data that are incomplete or subject to further revision by the source agency (see “Source Data for the Advance Estimate” on page 3). The “second” estimate for the fourth quarter, based on more complete data, will be released on February 28, 2018.

The increase in real GDP in the fourth quarter reflected positive contributions from personal consumption expenditures (PCE), nonresidential fixed investment, exports, residential fixed investment, state and local government spending, and federal government spending that were partly offset by a
negative contribution from private inventory investment. Imports, which are a subtraction in the calculation of GDP, increased (table 2).

There is some good news hidden in the numbers released today. For one thing, the numbers do show that economic growth last year was better than it had been in 2016, although it wasn’t far different from what we’d seen in previous years such as 2015 and 2014. For example, the figures show increases in both personal income and disposable personal income compared with previous quarters and with a year ago. Additionally, personal savings was lower for the final quarter of the year than it had been in previous quarters, an indication that consumers were willing to spend more money in the economy in general. To some extent, of course, this is probably an indication of holiday spending but nonetheless a good sign that consumers are confident enough in the state of the economy to spend money. Additionally, personal expenditures increased at their highest rate since early 2016, and exports were up by well more than 12%. To some extent, the growth numbers were dented by the fact that imports were up by nearly 14%, but that’s not really a bad sign since it shows that companies that rely on imports are expecting increased demand in the coming year. Finally, government spending, which amounts to a significant portion of Gross Domestic Product, was up with defense spending accounting for a significant portion of that. Given the fact that both the Trump Administration and Congress seem committed to increasing the Defense Department’s budget, this is a trend that is likely to continue into the future.

Looking back on the year as a whole, the Gross Domestic Product Growth rate was 2.3%. As this chart shows, while that is somewhat better than we’ve seen in the immediate past, it was roughly equivalent to what we saw during the Obama Administration overall and in some cases somewhat worse than that: 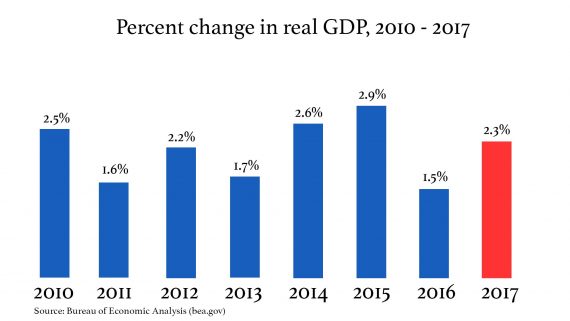 We can also see it in this quarter-by-quarter breakdown stretching back to 2014:

And in this chart that stretches back to 2013 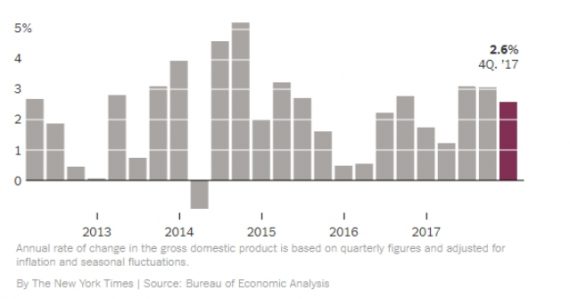 Notwithstanding the fact that the numbers are modest at best, The New York Times is optimistic and also emphasizes the fact that we’re starting to see the solid economic growth that the United States has seen since 2009 take place around the world:

The economy grew at an annual rate of 2.6 percent in the final quarter of 2017, the government reported Friday, finishing off the year on a firm footing — though short of the heady 4 percent annual growth that President Trump has promised.

Combined with a sinking jobless rate, a surging stock market and a sunny outlook, the estimated overall 2.3 percent rise in the nation’s output last year is a sign of the American economy’s continuing resilience.

Mr. Trump inherited an improving economy, and during his first year in office, the trend has continued and growth has accelerated. He called attention to that performance when he took the stage on Friday at the World Economic Forum’s annual meeting in Davos, Switzerland, where global leaders have been sharing encouraging economic news all week.

“After years of stagnation, the United States is once against experiencing strong economic growth,” he said from the podium. “America is roaring back.”

Carl Tannenbaum, chief economist at Northern Trust in Chicago, said there was plenty to be pleased about even though the number was lower than many analysts had predicted. “We closed 2017 in a very good position,” he said. “There are a lot of strengths in the fourth quarter.”

Holiday shoppers were enthusiastic, and spending on business and residential housing was up. A persistent appetite for foreign goods, however, widened the trade deficit — it reached $50.5 billion in November— and slowed G.D.P. gains. A decline in inventories provided another drag.

“We’re finally starting to see some pickup in business fixed investment,” said Joel Prakken, chief United States economist at Macroeconomic Advisers by IHS Markit. “It seems to me that businesses that have been very cautious out of fear that this expansion might peter out are now at the point where they risk losing sales if they don’t expand.”

The Commerce Department’s report on the gross domestic product is a rough draft. The fourth-quarter estimate will be revised twice in the next couple of months, and it could increase or drop by as much as a percentage point, based on previous recalculations. After all, government statisticians have to put together the fourth-quarter estimate without complete data on construction, trade and inventories.

That status will not prevent the figures from becoming fodder for the political debate about how much credit Mr. Trump deserves for the continuing expansion.

The nation’s $17 trillion economy recovered from a plodding start in the first three months of 2017, when sharp cuts in consumer spending limited G.D.P. growth to 1.4 percent on an annualized basis. It sprang back over the next six months, with the rate reaching 3.1 percent in the second quarter and 3.2 percent in the third.

The American economy’s performance has also been buoyed by simultaneous growth in nations around the world, which has fueled trade and enabled foreign consumers to buy more American-made products.

But in 2017, the expansion spread to at least 120 countries, according to a report released this week by the International Monetary Fund. In several, the rate outpaced that of the United States.

Several countries had higher growth rates than the United States did last year. Among large economies in the Group of 7, the United States ranked fifth, according to a report from the World Economic Forum. On a list of 29 advanced economies, it ranked 10th, though it sank close to the bottom in terms of equitably sharing the gains.

xhilarating stock market gains have also been a worldwide phenomenon. Lawrence H. Summers, the Harvard economist and former Treasury secretary, pointed out that the major stock indexes in Japan, Hong Kong, Germany and South Korea registered gains comparable to the Standard & Poor’s 500-stock index, if not better. “The U.S. performance doesn’t stand out relative to the rest of the world,” he said.

Although the figures released by the Commerce Department on Friday look backward, the nation’s economic dashboard indicates that the United States is poised for faster growth. Proponents of the Republican tax overhaul say it will accelerate investment and spending in the year ahead. And the inventory declines that detracted from G.D.P. growth last quarter should be followed by a burst of spending.

Several analysts and economists, however, argue that it is unlikely that the United States can sustain annual growth of much more than 2 percent given a smaller, aging work force, sluggish productivity growth and ballooning deficits.

The I.M.F. also warned that the economic gains forecast for the next couple of years would not be sustainable, particularly given the growing debt that the United States and other countries are building up.

“Political leaders and policymakers must stay mindful that the current economic momentum reflects a confluence of factors that is unlikely to last for long,” said Maurice Obstfeld, the I.M.F.’s chief economist.

Given that we’re now nearly nine years into the recovery that started shortly after President Obama took office, this is ordinarily the time when concerns would turn to a possible overheating economy and even a potential downturn. This has been the historic norm for positive periods of economic growth For several reasons, though, we may be able to rebuff the historic norm for at least a short period of time. First of all, the downturn that occurred in the Great Recession was far more significant than previous post-war recessions, meaning that it took far longer for the economy to just get back to where it was when the recession started. This means that there’s arguably a lot more room to grow assuming that we don’t hit a bump in the road caused by non-economic factors that could push the economy into recession for some reason. Second, as noted, after several years in which economic growth in the rest of the word was stagnant or event recessionary, we’re finally starting to see recoveries around the world. This is likely to benefit American businesses that rely on international trade, although that could be impacted by the Trump Administration’s policies on trade that threaten to up-end years of progress on lowering trade barriers. Finally, whatever one thinks of the tax plan that recently passed Congress, the fact that it will lead to higher incomes is likely to help stimulate growth to some degree.

As with all of these economic statistics, there are a variety of opinions regarding what this all might mean for the political fortunes of the Trump Administration and the two political parties in this year’s midterms. If we manage to see higher growth in the months ahead, then that could inure to the benefit of Republicans who are heading into the election with the albatross of a historically unpopular President around their necks. It could also make it more difficult for Democrats to convince voters to change course at this time and give them a chance at running Congress. These numbers are also likely being watched closely by supporters of the aforementioned tax bill since it’s clear that we’re going to need economic performance much better than these numbers over the next several years in order to both prove the predictions of the plan’s proponents true and ensure that the plan doesn’t explode the deficit due to lower than expected revenues due to slower than needed economic growth. Finally, Republicans would need stronger economic growth in order to sell changes to entitlement programs and other changes in policy to voters.

All that being said, the numbers released today are good, but not great, news. We’ll have to see how this plays out going forward.