Backing up the nation's intelligence agencies, the Senate Intelligence Committee said in a preliminary statement that it had concluded that Russia sought to aid Donald Trump's campaign in the 2016 Presidential election. 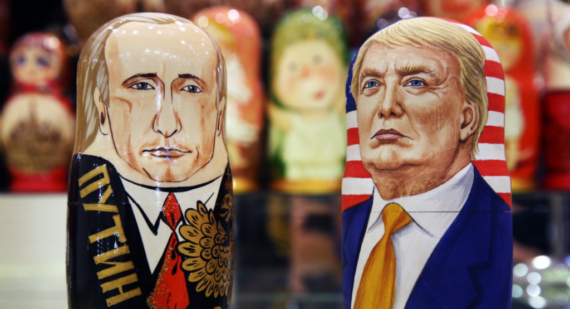 In a preliminary statement summarizing its findings after an investigation that has lasted more than a year, a bipartisan statement by the Senate Intelligence Committee is stating that the evidence it has uncovered has revealed that the Russian Government sought to intervene in the 2016 Presidential election to aid the campaign of President Trump, a conclusion that directly contradicts a report released last month by the Republican majority on the House Intelligence Committee:

“We see no reason to dispute the [intelligence community’s] conclusions,” the committee’s chairman, Sen. Richard Burr (R-N.C.), said Wednesday in a joint statement with its vice chair, Sen. Mark R. Warner (D-Va.), who added: “Our staff concluded that the … conclusions were accurate and on point. The Russian effort was extensive, sophisticated, and ordered by President Putin himself for the purpose of helping Donald Trump and hurting Hillary Clinton.”

This marks the second of four interim findings the intelligence committee has said it will disclose before tackling the more consequential question of whether Trump and his associates colluded with Russia to influence the election’s outcome, allegations the president has denied and sought to discredit. The committee, which earlier this month released related findings on election security, is expected to publish a comprehensive final report this fall.

Wednesday’s announcement comes amid growing Republican scrutiny of the investigation led by special counsel Robert S. Mueller III, whose team also is examining whether Trump’s campaign coordinated with the Kremlin and if the president obstructed justice in a bid to limit the probe’s scope.

The Senate committee’s findings clash with the House GOP’s determination that the intelligence community did not follow its own best practices in concluding the Kremlin favored Trump in the election. The dispute — and the questions it now raises about which record of events is most accurate — could complicate the Republican Party’s messaging heading into the 2018 election season.

Trump has taken umbrage at the intelligence community’s determination that the Kremlin favored his candidacy over Clinton’s. The president cheered the House Intelligence Committee’s report, claiming on Twitter it vindicated him by finding there was no evidence his campaign colluded with Russia.

Although the Senate Intelligence Committee has yet to weigh in on the collusion allegations, Burr and Warner have hinted for days that their panel’s interim findings on the intelligence community would depart from those reached by Republicans on the House Intelligence Committee. “I’m not sure that the House was required to substantiate every conclusion with facts,” Burr told reporters last week, promising the Senate panel would “have the facts to show for” its conclusions.

Warner said Monday, “Everyone that we’ve ever had testify still stands by the full findings of the ICA,” referring to the intelligence community’s assessment. “We’ve had all the Obama officials, we’ve had all the Trump officials. Every person,” he added.

As noted, last month the Republican majority on the House Intelligence Committee issued a one-sided report which basically sought to absolve the President of any culpability by concluding that there was no evidence of collusion between the Trump campaign and Russian officials with respect to the 2016 campaign. This conclusion was reached notwithstanding the fact that there is clear evidence that the Republicans on the committee sought to control the investigation in such a manner that it essentially did not even bother to attempt to explore the issue of collusion and that it declined entirely to interview certain witnesses that may have had relevant evidence in this regard. The Democratic minority on that committee announced at the time that it intended to release its own rebuttal to the majority report, but that rebuttal has yet to be released. To say the least, though, this statement from the Senate committee seems to confirm that the conclusions reached by the Republicans on the House committee are quite obviously the complete partisan garbage that they always appeared to be from the start

Realistically speaking, of course, this conclusion is hardly surprising given all of the evidence that has come out over the past year or more. Even before the election was over, all of America’s major intelligence agencies had concluded, and reported to President Obama, that the Russians were actively interfering in the 2016 election. Not long after Election Day, the evidence that this interference was designed to aid the Trump campaign became more self-evident as the days went on. Over the course of the past year, we’ve learned of a number of facts that just made that conclusion stronger, and also tend to provide at least some evidence that potentially supports the idea that there was at least some kind of coordination between those Russian efforts and the Trump campaign. The most direct evidence of that comes in the form of the contacts that certain Trump campaign officials, including not only people such as Carter Page and George Papadopoulos but also then-Senator Jeff Sessions and former National Security Adviser and early Trump supporter, retired General Michael Flynn. Additional evidence can be seen in what clearly seems to be Russian involvement in the hacking of the emails of officials at the Democratic National Committee and close Clinton confidante Anthony Podesta and the clearly coordinated release of those emails at times designed to deflect attention from bad news for Trump such as the release of the Access Hollywood tape in October 2016. Given all of that, the idea that the Russians were trying to help Trump is self-evident. It will be interesting to see what other evidence will be revealed when the Senate committee releases its report in the coming months.