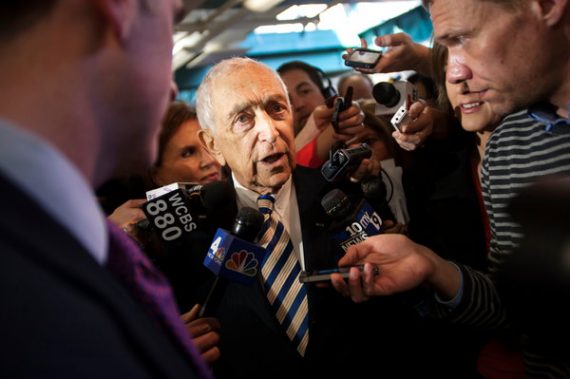 Frank Lautenberg, who became the longest serving U.S. Senator in New Jersey’s history, has died at the age of 89 after a series of long illnesses:

Frank R. Lautenberg, who fought the alcohol and tobacco industries and promoted Amtrak as a five-term United States senator from New Jersey, died Monday morning. He was 89.

Mr. Lautenberg, a Democrat, died as a result of complications from viral pneumonia at NewYork-Presbyterian Hospital/Weill Cornell, his office said. He had decided not to run for another term next year.

On Feb. 18, 2010, his office announced that he had stomach cancer. Dr. James F. Holland, an oncologist at Mount Sinai Medical Center in Manhattan, said then that he expected the senator to make a “full and complete recovery.”

First elected in 1982 at age 58 after a successful business career, Mr. Lautenberg served three terms, retired and instantly regretted the decision. When Senator Robert G. Torricelli made a last-minute decision not to seek re-election in 2002, Mr. Lautenberg ran in his place and won the seat. He was re-elected in 2008.

“He leaves behind an amazing legacy of pushing for the rights of the working poor and middle class,” said Senator Steve Sweeney, a Democrat who is the president of the New Jersey Senate. “While a man of means, he never, ever lost sight of helping working people. He will be missed.”

Under New Jersey law, Gov. Chris Christie, a Republican who is running for re-election, will appoint a temporary replacement for Mr. Lautenberg’s seat. A special election will be held later this year with Newark Mayor Cory Booker, who had already declared his intention to run next year, the most likely Democratic candidate. The winner of the special election would still have to run in 2014 for a full six-yer term.

Never a flashy senator — his colleagues Bill Bradley and Mr. Torricelli got more attention — Mr. Lautenberg acquired influence on the Appropriations Committee and had a consistently liberal voting record. Americans for Democratic Action said he had voted liberal 94 percent of the time.

Mr. Lautenberg’s first major victory came in 1984. A freshman senator in the minority party, he pushed through a provision to establish a national drinking age of 21, a measure that threatened to cut 10 percent of a state’s federal highway funds if it did not comply. He argued that the change would save lives by ending “a crazy quilt of drinking ages in neighboring states” and prevent those under 21 from driving over “blood borders” to get drunk and then try to drive home.

“He had to fight like hell to get it through,” Jay A. Winsten, associate dean of the Harvard School of Public Health, said in an interview. “The estimates are that the cumulative lives saved are in excess of 25,000.”

Mr. Lautenberg followed that move 16 years later with another condition on highway spending: that states must designate 0.08 percent blood alcohol as the level that would constitute being drunk.

In 1989, he led a successful fight to ban smoking on all commercial airline flights. Mr. Lautenberg, once a two-pack-a-day smoker, told the Senate: “With this legislation, nonsmokers, including children and infants, will be free from secondhand smoke. Working flight attendants will avoid a hazard that has jeopardized their health and their jobs.”

He followed up with later legislation, in this case prohibiting smoking in federal buildings and in all federally financed places that serve children.

Mr. Lautenberg’s other legislative achievements include a 1996 law denying gun ownership to people who have committed domestic violence. He was also the author of legislation requiring that by 2012 all cargo destined for United States ports be screened for nuclear material, a requirement that both the Bush and the Obama administrations have said cannot be met.

Another Lautenberg measure gave refugee status to people from historically persecuted groups without requiring them to show that they had been singled out. The senator estimated that 350,000 to 400,000 Jews entered the United States under that 1990 law. Evangelical Christians from the former Soviet Union also benefited from the law.

Though Mr. Lautenberg had never held elected office before running for senator, he immediately took to the sharp style of New Jersey politics. His entry to the Senate and his return were preceded by scandal involving another Democrat. In 1982, Senator Harrison A. Williams Jr. was convicted of bribery and resigned. In 2002, the Senate Ethics Committee declared that Mr. Torricelli was “severely admonished” for failing to report gifts from a contributor while helping the contributor’s business through official acts. Mr. Torricelli quit the race six weeks before the election.

Campaigning was rough in Mr. Lautenberg’s first two races. In 1982 he implied that this opponent, Millicent Fenwick, a 72-year-old moderate Republican who had clashed with President Richard M. Nixon, was too old. He called her “eccentric” and offered doubts about her “fitness.” He won an upset victory with 51 percent of the vote.

In 1988, he and Pete Dawkins, a former West Point football star and Vietnam War hero, slugged it out with blunt and sometimes provably false campaign television advertisements. “Gladiator sports are in,” Mr. Lautenberg observed. He won with 54 percent.

Frank Raleigh Lautenberg was born in Paterson, N.J., on Jan 23, 1924, to Sam and Mollie Lautenberg, Jewish immigrants from Poland and Russia. The family was poor. His father repeatedly tried to start up small businesses, returning to work in Paterson’s silk mills when the ventures failed.

In 2000, Mr. Lautenberg accompanied a reporter for The Star-Ledger of Newark to a long-closed silk mill. “My father took me in there one time and told me to look around,” he told the reporter. “He said you must never work like this. He said you have to get an education. I was 12; it didn’t mean a lot to me at the time. But it must have sunk in, because I did get an education. I didn’t want to work and struggle like he did.”

Mr. Lautenberg served in the Army Signal Corps in World War II and, after his discharge in 1946, used the postwar G.I. Bill of Rights to attend Columbia University, graduating in 1949. That experience, he said later, made him a strong supporter of the G.I. Bill enacted over Bush administration objections in 2008, a measure that sharply increased educational benefits.

He briefly worked for the Prudential Insurance Company, but in 1952 approached Joe and Henry Taub, the classmates who had only recently started the payroll firm. Mr. Lautenberg persuaded them to hire him to sell the company’s services.

When he joined the company, he was its fifth employee. But it grew rapidly, and by 1982, when he left the company as its chief executive, it was one of the largest computer service companies in the world, with 15,000 employees.

Lautenberg was also last person who fought in World War II to serve in the United States Senate, marking the end of an era that saw some 115 World War II veterans serve in that body in the 68 years since that war ended.

What Are The Odds Manchin-Toomey Will Pass The Senate?