Seven years ago, Steve Jobs showed us that we could literally hold the world in the palm of our hand. 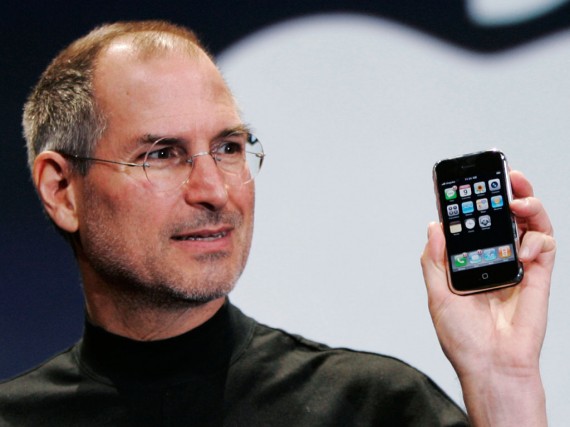 It was seven years ago today that the world was introduced to a product that set in motion technology that continues to change the world:

Seven years ago, on January 9, 2007, the late Apple CEO Steve Jobs took the stage at the Moscone Center in San Francisco to introduce the first iPhone. “Today, Apple is going to reinvent the phone,” Jobs proclaimed:

This is a day I’ve been looking forward to for two-and-a-half years. Every once in a while, a revolutionary product comes along that changes everything. And Apple has been — well, first of all, one’s very fortunate if you get to work on just one of these in your career. Apple’s been very fortunate. It’s been able to introduce a few of these into the world. 1984, introduced the Macintosh. It didn’t just change Apple. It changed the whole computer industry. In 2001, we introduced the first iPod, and it didn’t just change the way we all listen to music, it changed the entire music industry. Well, today, we’re introducing three revolutionary products of this class. The first one is a widescreen iPod with touch controls. The second is a revolutionary mobile phone. And the third is a breakthrough Internet communications device. So, three things: a widescreen iPod with touch controls; a revolutionary mobile phone; and a breakthrough Internet communications device. An iPod, a phone, and an Internet communicator. An iPod, a phone…are you getting it? These are not three separate devices, this is one device, and we are calling it iPhone. Today, Apple is going to reinvent the phone, and here it is. No, actually here it is, but we’re going to leave it there for now.

He wasn’t kidding. The iPhone, like the Macintosh and iPod before it, redefined the category. The smartphone revolution started by the iPhone has put a powerful computer into the hands of billions of people around the world.

“iPhone is a revolutionary and magical product that is literally five years ahead of any other mobile phone,” said Jobs said in the press release. “We are all born with the ultimate pointing device–our fingers–and iPhone uses them to create the most revolutionary user interface since the mouse.”

It took another six months for people to actually get their hands on the much anticipated product, though, because that first iPhone didn’t actually become available until the end of June. When it did, though, it was quickly snatched up in a manner that has been repeated with each of the seven iterations that the phone has gone through in the seven years since then, including the ubiquitous lines outside of Apple and AT&T stores that have now become something of a right of passage for Apple fanboys, and fangirls, every time a new product in the iPhone or iPad line is launched. Very quickly, Apple came to dominate a market that had barely just existed before Jobs took the stage, the consumer smartphone market. The closest thing to a competitor at the time, Blackberry, dominated the business market at the time and continued to do so for many years thereafter, but its owner, Research In Motion, was slow to adapt to the touchscreen world that Apple had introduced and its first efforts to enter the consumer market as an Apple competitor was largely a failure. I was a Verizon customer at the time, indeed I still am, and gave the Blackberry Storm a try before giving up on what was clearly inferior technology. Today, Blackberry, once the cutting edge of phone technology has largely been left behind and its parent company seems headed either for Bankruptcy Court or some kind of a buyout that will likely end up with the company being stripped for the only thing of value that it owns at this point, its patents and trademarks.

Apple sat alone on the cutting edge of the smartphone market for only about a year, though. Back in 2005, when the rumors of an Apple phone were still just rumors, Google acquired a company called Android, Inc., which had been developing an open source operating system for mobile devices and went to work on a project of its own. Roughly a year after Jobs first introduced the iPhone, we found out just what that project was when the HTC Dream, the first phone to running the Android operating system was introduced to the world. Google didn’t just introduce the phone and the operating system, though, they followed a different path than Apple by making the operating system open source and openly licensing it to any manufacturer and cell phone provider willing to pay the license fees. That proved to be a smart business decision, because it meant that several manufacturers, from HTC to Motorola, the smartphone part of which is now owned by Google, to Samsung began making phones of their own based on the Android operating system. While this has caused some problems for Android based phone users due to the fact that manufacturers and carriers tend to customize the operating system to suit their needs, meaning that they get O/S updates far less frequently than Apple users tend to, it has also meant that Android based phones currently outsell iPhones on a worldwide and a U.S. domestic basis, although Apple has a higher profit margin on its phones.

Despite those figures, it is still the iPhone that sets the technology standard in the smartphone world, and it’s still the announcement of a new iPhone that gets all the press attention, not the announcement of new iterations of, say, Motorola’s Droid line of Android based phones. More importantly, it was the iPhone that created this market and pushed the technology that allows us to literally allows us to access the entire world from the palm of our hands in much the same way that the characters on Star Trek were able to access their world on their Tricorders and PADD’s. And that all happened because a guy named Steve Jobs had an idea that he introduced to the world seven years ago today.