A quarter century ago, soldiers were first using GPS to help them navigate the battlefield. Now, GPS is giving away their location.

A quarter century ago, soldiers were first using GPS to help them navigate the battlefield. Now, GPS is giving away their location.

An interactive map posted on the Internet that shows the whereabouts of people who use fitness devices such as Fitbit also reveals highly sensitive information about the locations and activities of soldiers at U.S. military bases, in what appears to be a major security oversight.

The Global Heat Map, published by the GPS tracking company Strava, uses satellite information to map the locations and movements of subscribers to the company’s fitness service over a two-year period, by illuminating areas of activity.

Strava says it has 27 million users around the world, including people who own widely available fitness devices such as Fitbit and Jawbone, as well as people who directly subscribe to its mobile app. The map is not live — rather, it shows a pattern of accumulated activity between 2015 and September 2017.

Most parts of the United States and Europe, where millions of people use some type of fitness tracker, show up on the map as blazes of light because there is so much activity.

In war zones and deserts in countries such as Iraq and Syria, the heat map becomes almost entirely dark — except for scattered pinpricks of activity. Zooming in on those areas brings into focus the locations and outlines of known U.S. military bases, as well as of other unknown and potentially sensitive sites — presumably because American soldiers and other personnel are using fitness trackers as they move around.

While DoD is putting out new guidelines to deal with this issue—and will almost surely wildly overreact—one wonders what possible value the Global Heat Map adds? Why is it that we need to publicly track the whereabouts of those wearing fitness trackers? 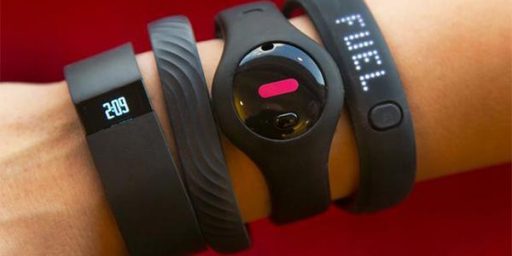