Arlen Specter is struggling with a reason not to vote against Elena Kagan. 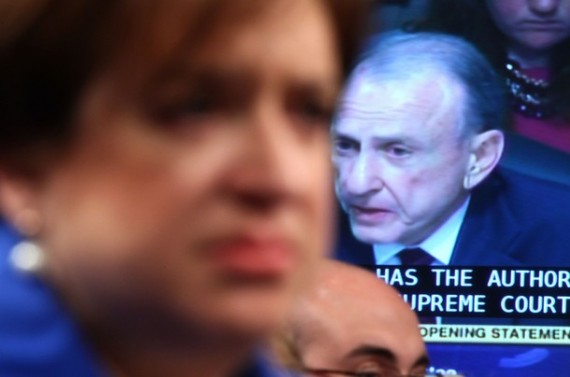 Arlen Specter, the former unreliable Republican who became an unreliable Democrat in an unsuccessful attempt to save his political career, is apparently going to stick it to his current party one more time on the way out the door.

Sen. Arlen Specter (D-Pa.), a perennial wildcard in Supreme Court confirmation hearings, cut short a line of questioning to nominee Elena Kagan today after he said she was not giving him substantive answers.

Specter warned that he was struggling to find a reason not to vote against her.

“You have followed the pattern which has been in vogue since Bork,” he said, referring to conventional wisdom that Supreme Court nominees have been hesitant to say much about their legal views after the nomination of the very substantive Judge Robert Bork failed in 1987. “It would be my hope that we could find some place between voting no and having some sort of substantive answers, but I don’t know that it would be useful to continue these questions any further.”

But Kagan, who in a 1995 law review article famously called for nominees to discuss substance, defended her decision not to comment.

“You shouldn’t want a judge who will sit at this table and who will tell you that she will reverse a decision without listening to arguments and without reading briefs and without talking to colleagues,” she said.

This is so much farce.  Given the tenor of confirmation hearings over the last quarter century, it would have been absurd to expect Kagan to handle the questioning any differently.  And Specter has actually chaired the Judiciary Committee in recent memory, so it’s not as if I’m somehow privy to a secret that has eluded him.  Indeed:  He admits as much in the preface to his rant!

He’s right about one thing:   It’s not useful to continue asking questions that all understand in advance won’t be answered.   But the ones with the ability to change that are the ones doing the asking.