The Supreme Court has agreed to hear its first case on partisan gerrymandering in more than ten years, but opponents of the practice shouldn't start celebrating just yet. 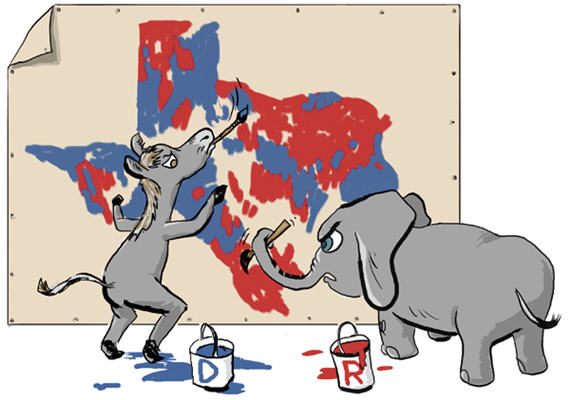 The Supreme Court agreed today to hear the appeal of the State of Wisconsin from a lower court ruling that struck down the states redistricting map on the ground that it went too far in drawing district lines that favored one party over the other:

WASHINGTON — The Supreme Court announced on Monday that it would consider whether partisan gerrymandering violates the Constitution. The case could reshape American politics.

In the past, the court has struck down election maps as racial gerrymanders that disadvantaged minority voters. But it has never disallowed a map on the ground that it was drawn to give an unfair advantage to a political party.

Some justices have said the court should stay out of such political disputes entirely. Others have said partisan gerrymanders may violate the Constitution. Justice Anthony M. Kennedy has taken a middle position, and the case could turn on his vote.

In a 2004 concurrence, he wrote that he might consider a challenge to political gerrymanders if there were “a workable standard” to decide when they crossed a constitutional line. But he said he had not seen such a standard.

The challengers in the new case, Gill v. Whitford, No. 16-1161, say they have found a way to separate partisanship from the many other factors that influence how districts are drawn.

The case arrives at the court in the wake of Republican victories in state legislatures that allowed lawmakers to draw election maps favoring their party.

The case started when Republicans gained complete control of Wisconsin’s government in 2010 for the first time in more than 40 years. It was a redistricting year, and lawmakers promptly drew a map for the State Assembly that helped Republicans convert very close statewide vote totals into lopsided legislative majorities.

Last year, a divided three-judge Federal District Court panel ruled that Republicans had gone too far. The map, Judge Kenneth F. Ripple wrote for the majority, “was designed to make it more difficult for Democrats, compared to Republicans, to translate their votes into seats.”

The decision was the first from a federal court in more than 30 years to reject a voting map as partisan gerrymandering.

The new standard proposed by the challengers tries to measure the level of partisanship in legislative maps by counting “wasted votes” that result from the two basic ways of injecting partisan politics into drawing the maps: packing and cracking.

In a 2015 article, Nicholas O. Stephanopoulos, a law professor at the University of Chicago and a lawyer for the plaintiffs, and Eric McGhee devised a formula to measure partisanship. The difference between the two parties’ wasted votes, divided by the total number of votes cast, yields an efficiency gap, they wrote.

Election law expert, and University of California law professor, Rick Hasen explains some of the legal background that has led us to this case:

For decades, voting-rights advocates who believe there is something unfair in letting partisan actors have free rein in drawing districts have looked to the courts to police to most egregious efforts to draw district lines to favor one party over another. Among other things, opponents of partisan gerrymandering have argued that allowing legislators to pick their voters rather than the other way around violates the Constitution’s equal-protection clause. The problem has been identifying when acceptable consideration of political party information to group similar voters together crosses the line into unconstitutionality.

In a 1986 case, Davis v. Bandemer, the Court announced that it could hear such cases (in technical legal terms, that the cases are “justiciable”), but it set forth a standard that was so hard to meet that there was never a successful claim. The Court reconsidered the issue in the 2004 case of Vieth v. Jubelirer. Four conservative justices, led by Justice Antonin Scalia, held that such claims were “nonjusticiable,” meaning that the Court could never hear such cases because there was no standard to separate permissible from impermissible consideration of party. The four liberal justices on the Court issued four separate opinions each setting forth a different standard which could be used to police the lines. Kennedy alone stood as the man in the middle, agreeing with the liberals that courts could hear these cases, but agreeing with the conservatives that each of the standards the liberals proposed, as well as a slightly different standard proposed by the plaintiffs in Vieth, were lacking. Kennedy suggested further consideration of the issue, looking perhaps at history, at analysis aided by technology, and at the First Amendment, which prevents certain government action that punishes people based on their partisan affiliation.

One way to understand the four different dissenting opinions in Vieth is that they were like contestants in a beauty pageant parading before Kennedy to see if there was anything he liked. And it has become clear that what’s happened since Viethin the lower courts has been more of the same: attempts in partisan gerrymandering cases to find a new “manageable” standard that would please Kennedy.

The lower court in the Gill case, which found last year that Wisconsin’s legislative districts were unconstitutional, relied partially upon the “efficiency gap,” a measure of partisan gerrymandering developed by Eric McGhee and Nicholas Stephanopoulos which focuses on how much a partisan redistricting plan “packs” and “cracks” the other party’s voters for partisan advantage.

According to the 2015 article discussed above, in a world where the districts are drawn in a perfectly nonpartisan manner, there would be no “efficiency gap.” The Plaintiffs in the Wisconsin case note that the gap was 12.2% in 2012 and 9.6% in 2014 according to the formula developed by Stephanoplous and McGhee and argue that gaps over 7% violate the Constitution. It was largely based on this argument that the lower court struck down the Wisconsin map and ordered the state legislature to redraw the district lines to reduce the partisan gap. The problem with the lower court’s ruling, of course, is the fact that the formula they rely on is based on presumptions that are not part of the Constitution and that there is no provision in the Constitution that even comes close to suggesting that there’s any functional or legal difference between a map with a 13.3% or 9.6% gap and one with a 7% gap. Additionally, the formula developed by Stephanopolous and McGhee is merely one of many meant to measure the alleged political partisanship of a particular redistricting map.

The biggest weakness in the Plaintiff’s case, though, seems to me to be the fact that there doesn’t seem to be any bar in the Constitution to a legislature controlled by one political party from creating district maps that favor its party to the detriment of others, nor does there appear to be any Federal law that bars the practice. In fact, the idea of partisan drafting of district lines is one that goes back to the very foundation of the republic, which is why it is named after Elbridge Gerry, one of the signers of the Declaration of Independence who went on to be a delegate to the 1787 Constitutional Convention, Congressman, Governor, and 5th Vice-President of the United States, serving under James Madison for a year until he died in 1814. Since then, political parties at the state level have regularly used the redistricting process to benefit themselves and, thanks to the fact that there are no real legal limitations upon them, Indeed, the Constitution seems to grant essentially unchecked authority to the states when it comes to redistricting. The only limitations that exist are those that prohibit the use of redistricting in manners tend to discriminate based on race. However, that argument was not made in the Wisconsin case and it does not appear that there is any case that the district lines in the state violate those restrictions. Given all of that, those looking to this case in the hope of a sweeping ruling against political gerrymandering shouldn’t start celebrating quite yet.