It’s official: Sandra Day O’Connor has retired and President Bush will have an opportunity to appoint a new Justice.

Sandra Day O’Connor, the first woman appointed to the U.S. Supreme Court and a decisive swing vote for a quarter-century on major legal issues, announced her resignation today effective upon the confirmation of her successor.

In a brief letter to President Bush, O’Connor, 75, gave no reason for her decision to leave the court after 24 years as an associate justice, a tenure in which she played a crucial role in decisions on such major issues as abortion and the death penalty. But a Supreme Court spokeswoman later said O’Connor was retiring in part because she “needs to spend time now with her husband,” who is reportedly in poor health.

Bush, appearing before reporters at the White House Rose Garden, hailed O’Connor as “a discerning and conscientious judge and a public servant of complete integrity.” He said he has directed his staff, in cooperation with the Justice Department, to compile a list of potential nominees “who meet a high standard of legal ability, judgment and integrity and who will faithfully interpret the Constitution and laws of our country.” Bush said he and his advisers would also consult with members of the Senate, which must confirm his nomination. “The nation deserves, and I will select, a Supreme Court justice that Americans can be proud of,” Bush said. He said he would be “deliberate and thorough” in choosing a nominee and would act in a “timely manner so that the hearing and the vote can be completed before the new Supreme Court term begins.” The court is scheduled to convene in early October for its next term. Bush also called for a “dignified process” in the Senate “characterized by fair treatment, a fair hearing and a fair vote.”

The resignation gives Bush his first opportunity to appoint a Supreme Court justice, a nomination that could trigger a political battle in the Senate. Democratic senators have warned that if Bush accedes to his staunchly conservative base and names someone they consider out of the mainstream, the nomination could run into stiff resistance.

“This is to inform you of my decision to retire from my position as an associate justice of the Supreme Court of the United States, effective upon the nomination and confirmation of my successor,” O’Connor wrote to Bush. “It has been a great privilege indeed to have served as a member of the court for 24 terms. I will leave it with enormous respect for the integrity of the court and its role under our constitutional structure.”

Her resignation creates the first opening on the Supreme Court in 11 years, one of the longest stretches without a vacancy in the two centuries since the court was founded. The court has not had such a lengthy period without an opening since the early 19th century.

It should be exciting, given all the sturm and drang over lower court nominees. 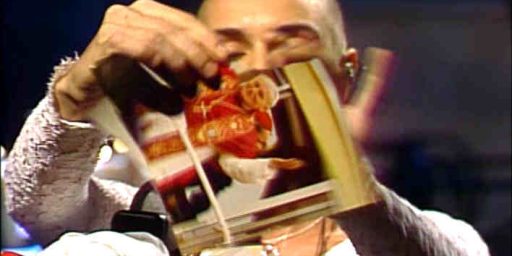 Sinead O’Connor and the Pope