One Goldman Sachs employee decided to quit his job in a very public manner. 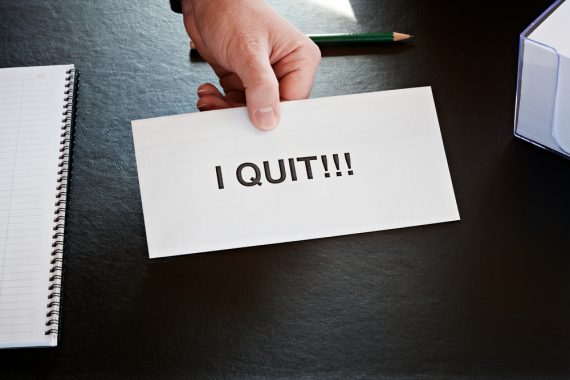 Greg Smith, a London based Vice-President for Goldman Sachs, decided for some reason to make his departure from the investment firm very public by putting his resignation letter on the Op-Ed page of The New York Times:

Wall Street traders come and go all the time, but few have quit with the flair of Greg Smith. The way he resigned from Goldman Sachs, and what he had to say, could reignite a debate over how much Wall Street has changed in the wake of the financial crisis.

Very little, he said in an Op-Ed column in The New York Times on Wednesday. Mr. Smith, a London-based executive director for Goldman Sachs overseeing equity derivatives, decried a drastic change in culture at the firm since he joined it 12 years ago, with profits now coming before the interest of clients who, he wrote, are often derided as “muppets” by people at Goldman.

Mr. Smith is saying publicly what others whisper privately, which is why his cri de coeur may be so provocative. Even on Wall Street — where making money is good, and making more money is better — a few shibboleths still command respect, including the one that the customer should come first, or at least second, not dead last. Since the financial crisis, in fact, nearly all the big banks have claimed to be client-centric as they seek to rebuild public trust.

Mr. Smith’s criticism, much more than stories about bonuses or brickbats from the likes of Occupy Wall Street, could be especially painful for Wall Street now. Memories are still fresh of the Securities and Exchange Commission lawsuit filed in April 2010 accusing Goldman of fraud, after it sold clients complicated mortgage backed securities that later soured, and never mentioned that it had bet against them.

Smith’s Op-Ed, in addition denouncing what he contends Goldman has become, is also incredibly self-serving because, of course, things just weren’t don’t this way when he started out the in the business:

Today is my last day at Goldman Sachs. After almost 12 years at the firm — first as a summer intern while at Stanford, then in New York for 10 years, and now in London — I believe I have worked here long enough to understand the trajectory of its culture, its people and its identity. And I can honestly say that the environment now is as toxic and destructive as I have ever seen it.

To put the problem in the simplest terms, the interests of the client continue to be sidelined in the way the firm operates and thinks about making money. Goldman Sachs is one of the world’s largest and most important investment banks and it is too integral to global finance to continue to act this way. The firm has veered so far from the place I joined right out of college that I can no longer in good conscience say that I identify with what it stands for.

It might sound surprising to a skeptical public, but culture was always a vital part of Goldman Sachs’s success. It revolved around teamwork, integrity, a spirit of humility, and always doing right by our clients. The culture was the secret sauce that made this place great and allowed us to earn our clients’ trust for 143 years. It wasn’t just about making money; this alone will not sustain a firm for so long. It had something to do with pride and belief in the organization. I am sad to say that I look around today and see virtually no trace of the culture that made me love working for this firm for many years. I no longer have the pride, or the belief.

It makes me ill how callously people talk about ripping their clients off. Over the last 12 months I have seen five different managing directors refer to their own clients as “muppets,” sometimes over internal e-mail. Even after the S.E.C., Fabulous Fab, Abacus, God’s work, Carl Levin, Vampire Squids? No humility? I mean, come on. Integrity? It is eroding. I don’t know of any illegal behavior, but will people push the envelope and pitch lucrative and complicated products to clients even if they are not the simplest investments or the ones most directly aligned with the client’s goals? Absolutely. Every day, in fact.

It astounds me how little senior management gets a basic truth: If clients don’t trust you they will eventually stop doing business with you. It doesn’t matter how smart you are.

These days, the most common question I get from junior analysts about derivatives is, “How much money did we make off the client?” It bothers me every time I hear it, because it is a clear reflection of what they are observing from their leaders about the way they should behave. Now project 10 years into the future: You don’t have to be a rocket scientist to figure out that the junior analyst sitting quietly in the corner of the room hearing about “muppets,” “ripping eyeballs out” and “getting paid” doesn’t exactly turn into a model citizen.

Felix Salmon isn’t buying it for a minute:

Smith has been in this business for 12 years, and he’s done extremely well by it. And to a certain extent, if the people who work for him are constantly asking how good a deal is for Goldman, rather than how good the deal is for Goldman’s clients, then that’s because of the example he set. What’s missing in his op-ed is any sense of mea culpa, any sense that he was at all part of the problem.

There’s a strong smell of faux-naive coming from Smith’s op-ed. “Leadership used to be about ideas, setting an example and doing the right thing,” he writes. “Today, if you make enough money for the firm (and are not currently an ax murderer) you will be promoted into a position of influence.” Here’s a question for him: back when he made videos for Goldman urging candidates to join the company, were the people who got promoted those who had ideas and did the right thing? Or were they the ones who made lots of money for the firm? To ask the question is to answer it.

So let’s not pretend to be shocked that the most successful bankers are the ones who make the most money off their clients.

It’s hard to figure out what Smith’s motives are here. After what he wrote, one certainly can’t see any other investment bank in New York, or anyone else, hiring him at any point in the near future. Maybe he’s angling for an appointment to the SEC or a job with some think tank or lobbying firm in D.C. Maybe he wants to get invited on television (and I’m betting after this Op-Ed he most certainly will be showing up on CNN, MSNBC, and/or CNBC very soon.) Perhaps he wants to curry favor with a new crowd of people who find what he does for a living distasteful. Maybe he’s got enough money in the bank from all those clients he was selflessly representing without any concern for his own profit that he really doesn’t need to work anymore and he’s going to be kicking back on a beach in Maui in the near future.

Whatever Smith’s motivations, I’ve got to agree with Salmon, and with Daniel Drezner, that Smith’s rather obvious effort to style himself as some kind of noble whistleblower falls short. Are we really supposed to believe, as Salmon asks that profit wasn’t the motivation for traders, and the primary means of advancement, at Goldman (or any other investment firm) during this supposed Golden Era that Smith laments? Of course it was, and on some level there isn’t anything wrong with that. Profit maximization is, after all, what business is all about on some level. Pretending otherwise is just silly, and Smith’s decision to pour napalm on his bridges and set them on fire comes across as little more than pedantic moral preening.

Smith’s Op-Ed has accomplished one thing, though, it’s inspired a whole series of “Why I’m Leaving” parodies that started springing up first thing this morning. The first one that I saw, and still the best so far, appears at a parody site called The Daily Mash (some ads at link slightly NSFW), in which Darth Vader explains why he’s leaving the Empire:

TODAY is my last day at the Empire.

After almost 12 years, first as a summer intern, then in the Death Star and now in London, I believe I have worked here long enough to understand the trajectory of its culture, its people and its massive, genocidal space machines. And I can honestly say that the environment now is as toxic and destructive as I have ever seen it.

To put the problem in the simplest terms, throttling people with your mind continues to be sidelined in the way the firm operates and thinks about making people dead.

The Empire is one of the galaxy’s largest and most important oppressive regimes and it is too integral to galactic murder to continue to act this way. The firm has veered so far from the place I joined right out of Yoda College that I can no longer in good conscience point menacingly and say that I identify with what it stands for.

I hope this can be a wake-up call. Make killing people in terrifying and unstoppable ways the focal point of your business again. Without it you will not exist. Weed out the morally bankrupt people, no matter how much non-existent Alderaan real estate they sell. And get the culture right again, so people want to make millions of voices cry out in terror before being suddenly silenced.

Now that’s how you quit a job.