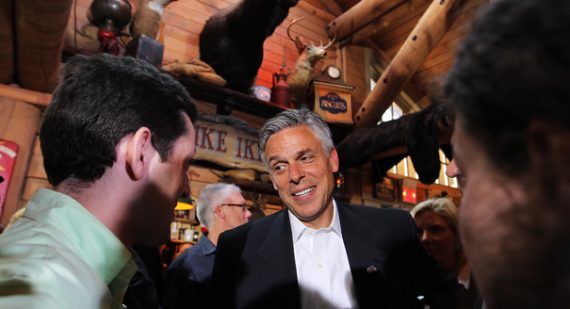 Matt Bai makes the case for why we shouldn’t necessarily write off the former Governor of Utah:

Those who laugh, though, should keep a few things in mind about next year’s campaign. One is that the presidential primary electorate will be very different from the 2010 primaries for House and Senate, which, like all off-year elections, attracted a relatively small number of Republican voters (even where turnout was higher than usual). In New Hampshire, where Tea Party types overran the state Legislature and wrested control of the state party last year, turnout in the 2010 primaries was under 20 percent, as it usually is.

The turnout in next year’s presidential primary, on the other hand, will probably reach 60 percent. That means the influence of the most conservative, most motivated activists will almost certainly be diluted.

Second, it’s vital to remember that next year’s primaries will be the first since 1996 where Democrats haven’t had their own nomination fight going on. In other words, in the last two contested Republican primary seasons, independents in “open states” like New Hampshire split their votes between Republicans and Democrats. But this year, all of them will be voting for a Republican.

This is huge. Consider that had it not been for all the independents who voted for John McCain in 2000, Bill Bradley might well have won the Democratic primary in New Hampshire — and who knows what would have happened after that. (I’ll leave that to Newt Gingrich to explore in one of his alternative histories.)

All of this suggests, I think, that a less doctrinaire candidate might have a real shot in New Hampshire, once the campaign really gets underway and voters get a chance to assess the field. That’s when all the polling actually starts to mean something.

Bai makes some good points, but I have to wonder how realistic it is. Romney is as close to a favorite-son candidate in New Hampshire as we’re going to get this year. He’s effectively been campaigning there for years, and the voters there are familiar with him thanks to his campaigns for the Senate and Governor in Massachusetts. In the most recent New Hampshire poll, which Steven Taylor wrote about earlier this week, Hunstman’s favorable/unfavorable numbers are at 14%/36% and his Name ID is at only 50%. Frankly even the people who do know of Huntsman probably only have a rudimentary understanding of what he stands for. To some degree, this could actually be an advantage  for Huntsman since it means that he will have the ability to shape public opinion about him. Nonetheless, he currently stands at 3% in the polls in New Hampshire, and an average of 1.3% nationally. In some sense, there’s no place to go but up for him, but it’s going to take a lot for him to be considered a first tier candidate.