The latest effort to form a government out of last Sunday’s confusing election in Greece seems to have failed:

ATHENS — Talks to form a new Greek government collapsed on Sunday, when the leader of a left-wing party that favors rejecting Greece’s loan agreement with foreign creditors again refused to join a unity coalition, making new elections almost a given.

President Karolos Papoulias of Greece was expected to meet with the leaders of several smaller parties on Sunday evening to try to persuade them to join a two-year unity government with the Socialists and center-right New Democracy aimed at enforcing the loan agreement — but with a possible renegotiation of some of its terms.

If Mr. Papoulias fails to convince leaders to form a coalition, he will call new elections in a month and appoint an interim government to lead Greece until then. The most likely date mentioned for new elections is June 17.

The political wrangling has again highlighted a clash between democracy and market forces. Greece’s political parties have been put in the position of needing to form a government that both reflects the will of the people — who largely voted against the loan agreement and would likely take to the streets if a new political formation did not  listen — but that does not allow the country to renege on its commitments to Europe.

Concerned about the political instability, European leaders have warned that if Greece does not keep its promises, Europe will stop funding it, causing the country to default and exit the euro. But Alexis Tsipras, the leader of the Coalition of the Radical Left, or Syriza, has gained momentum precisely by calling Europe’s bluff.

On Sunday, he insisted that his party would not join a unity coalition with the Socialists and New Democracy, who signed Greece’s debt deal. Syriza would “not be complicit in their crimes,” he said. “Those that governed the past two years have not only failed to accept the message from the elections. They continue their policy of blackmail.”

“We call on all Greeks, not just leftists, to condemn once and for all the forces of the past and to realize that the only hope that is still alive in this country is to unify against blackmail and stop the continuation of this barbarism.”

Mr. Tsipras called on the conservatives and socialists to go ahead and form a coalition with Democratic Left, a moderate leftist party that splintered from Syriza in 2010 and that maintains resistance to the debt deal as a central plank in its political platform. “They have 168 seats, they have a majority, let them proceed,” the leftist leader said, referring to the aggregate of seats in Greece’s 300-seat Parliament garnered by the three parties in elections.

In a statement, the Democratic Left party called Mr. Tsipras’s suggestion “slander.” On Sunday afternoon, a party official said that Democratic Left would not change its position on the grounds that a government without Syriza would “lack legitimacy and could stoke social unrest.”

“The rage of Syriza is such that they would not allow such a government to stand even for a day,” the official said, predicting a wave of sit-ins and protests led by the left-wing party.

I don’t think we should expect Greek President’s final effort to form a government to be any more successful than all the others that have been tried for the past week, which means we’re headed for another round of elections. At that point, the Greek people will either have to choose between the agreement that was made, or reject it and deal with the consequences of being forced out of the Euro, which are likely to be devastating for the Greek economy. 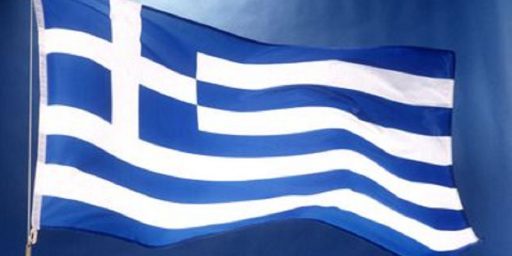