Terrorists May Pose As Vagrants

If you needed another reaspn to be leery of panhandlers, the State Department now says terrorists may disguise themselves as homeless people.

Asking for increased vigilance in the wake of the London bombings, the government is warning that terrorists may pose as vagrants to conduct surveillance of buildings and mass transit stations to plot future attacks. “In light of the recent bombings in London, it is crucial that police, fire and emergency medical personnel take notice of their surroundings, and be aware of ‘vagrants’ who seem out of place or unfamiliar,” said the message, distributed via e-mail to some federal employees in Washington by the U.S. Attorney’s office.

It is based on a State Department report that was issued last week. The State Department had no immediate comment Monday.
The warning is similar to one issued by the FBI before July 4, 2004 that said terrorists may attempt surveillance disguised as homeless people, shoe shiners, street vendors or street sweepers. The e-mail stresses that there is no threat of an attack and that it is intended to be “informative, not alarming.”

Homeless people easily blend into urban landscapes, the message said. “This is particularly true of our mass transit systems, where homeless people tend to loiter unnoticed,” the e-mail said.

So, that dollar you give to a beggar may go to al Qaeda. Or more likely, cheap wine. 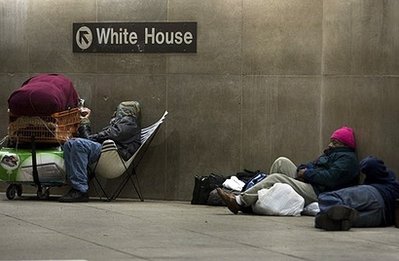